Can the Gladstone be a hub for food activism? 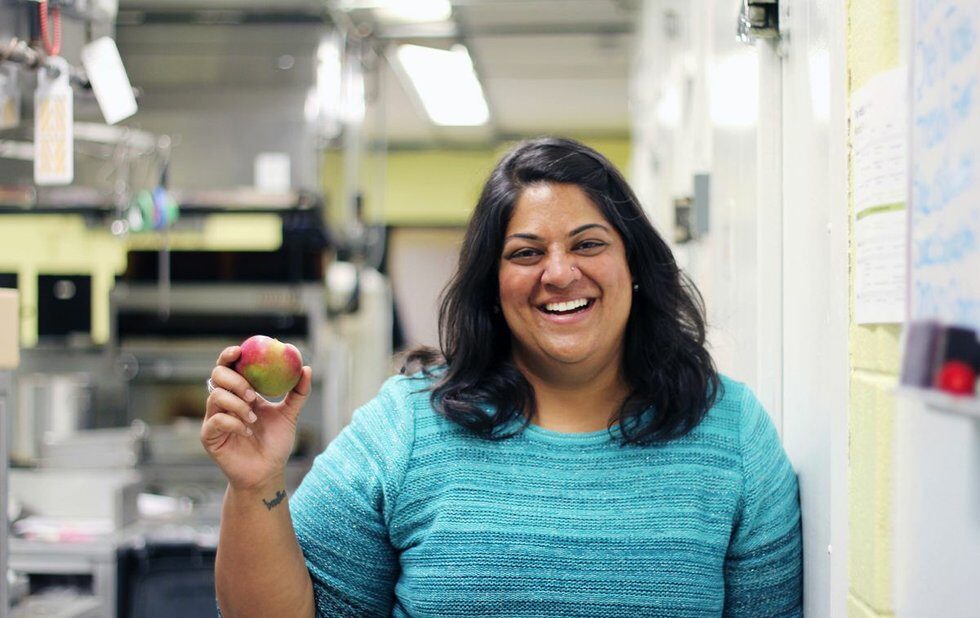 Joshna Maharaj might just be the first dedicated hotel “food activist” in hospitality history. That title was prominently displayed in her hiring announcement from the Gladstone Hotel last week – right alongside “executive chef.”

Maharaj has a long history of recipe development, and she knows her way around a kitchen – but her best-known work has been with groups like The Stop, and as a consultant to hospitals and other institutions seeking to improve their food programs. Last year, that work made her the sole Canadian nominee for the prestigious Basque Culinary World Prize, an award celebrating those who use gastronomy as a force for change.

Hiring her to head up their kitchen might seem like an out-of-character move for a hip boutique hotel on Queen West, but according to Maharaj, it’s a match made in heaven.

We asked the chef how she plans to use the hotel as a springboard for community outreach, including cooking pwyc meals for Parkdale residents, inviting farmers to host events and letting her staff’s culinary freak flags fly.

What attracted you to the Gladstone?

There’s no question that Christina Zeidler and I are kindred spirits. From the first moments we met, we were clearly speaking the same language, in terms of bridging the opportunities that exist between restaurants and sustainability. She’s really looking to rethink the way a hotel can connect with and nurture its community, which echoed the work I’ve been doing in institutions over the past several years. We have the same goals around building and strengthening the culture of food in the hotel.

I had never envisioned myself in a job like this. I never would have told you, “I hope to be the exec chef at a hotel one day.” But because the Gladstone is the curious place it is, it was a really easy jump.

It feels unprecedented. I’m excited at the idea that we might be pioneers in pushing that definition, taking sustainability beyond the way hotels usually approach it – like responsible staffing or environmental initiatives – to a greater social sustainability.

One of my tasks is to create a food program that’s accessible to our neighbours in Parkdale while still being polished enough to serve guests in from out of town. We hope to resonate with folks looking for a quick morning coffee or lunch, someone in a working meeting, as well as people celebrating or getting together with friends for drinks – or even something as polished as a wedding. I want to create a dynamic enough food program that we can serve all those people.

Balancing all that while still keeping that sustainability focus is a tall order, for sure. But I am so jazzed at the challenge, just to see what’s possible. Look, I can tell you one of my secrets: When you do something nobody’s done before, you can easily dispense with concerns about failure. You have nothing to measure it against, and you’re always further ahead with new information you didn’t have before you tried.

What are some changes you hope to implement within the Gladstone?

One of the things I’m most excited about is community feasting, built around a pwyc model – simple weeknight meals, a plate of pasta, soup, some good bread. We’re gonna do these things with some regularity. We’d love for people to know that there might be pwyc Tuesdays or whatever, pack the room and have this really lovely moment.

We also want to be a place to connect our community to the seasons. We’re doing workshops on sprouting plants, doing really tangible experiential things – the Gladstone will now be kind of ground zero for stuff like that. We could be a meeting place for tours of farmers’ markets or places where fruit trees grow in the city, putting a food lens on our community.

Most boutique hotels would be – to be blunt – too worried that outreach to community members in a place like Parkdale would alienate their more well-heeled guests.

Whereas we think it’s actually the strength of what we have to offer. And I see the way people are welcomed in our space, and with some real, conscious thinking about the role we want to play in the community, we think it’s very possible to do it all.

Will you still be doing other projects outside the Gladstone?

I can’t help myself. The Gladstone’s embrace of me is an embrace of all the things I come with, so by grace of having me, they now have my whole community. There’ll be lots of advocacy and consulting, because there are lots of people and groups who want to do work around food sustainability.

Over the past few years, you’ve been working on guidelines for prisons and hospitals to improve their food. Have more institutions been putting your practices in place?

One of the most bittersweet pieces, especially with the work around hospitals, is that we’ve done the work to see what’s possible. The trick is, it all hinges on more investment, and that’s not always the best news for people. Somehow, people had this idea that I would come up with a way to repackage hospital food that was cheaper – which is ridiculous, that fresh food with a real human connection would cost less. I have the nuts and bolts, so we were ready to deploy a team to anyone ready for engagement and investment, but unfortunately, we’ve done a lot of waiting.

Are you planning an overhaul of the actual menus at the hotel?

I will, for sure. I’m anxious to get moving on the fun, creative stuff like menu changes. Right now, I’m sort of deep in details of creating the bones of the food operation. People can expect really plant-focused food. Meat and fish will be there for sure, but they’ll be much more sustainably sourced and in much more sustainable amounts. We want to take the lead in showcasing vegetables that are seasonal and delicious. I think people are sometimes really surprised by how filling and satisfying vegetables can be.

We also need to figure out our personal “stamp” and how it’s going to come through on the menu. I’m a little jazzed about doing creative experiments with my staff. I see them every day making burgers and dressing them up their own way. I was like, “Guys, we already have two set burgers on the menu – but you’re not sharing yours with anybody.” The staff are really excited about good food, and I want to give them a chance to put their name and their stamp on something, float it out to people and see what they think.

Let’s talk sourcing. Are there plans to beef up relationships with local producers?

I’ve gone really deep on bringing a whole new collection of vendors to the table. I prioritize local sourcing – 100km Foods is easily at the top of my list. They’re a wonderful distributor, with access to more than 60 small family farms in southern Ontario. They have a very farmer-focused angle on their business, which to me is really important. There’s also a local butcher, Bespoke Butchers, who we’re really excited about.

It’s not just about cultivating a purchasing relationship. If we start buying food from you, that means you’re part of our community – you’ll do lunch-and-learn sessions with our staff, you’ll do tastings, we’ll showcase you on our menus in a much more vibrant way than “we’re just buying your stuff.”

We’ll build our menus around what is available, instead of having rigidity about what we want to serve and then shoehorning things that are not the best fit. You can definitely expect, at least once our spring menu launches, to see all the most delicious things we can find from southern Ontario.

I think my big hypothesis is that with food, it can be win-win-win-win. We can, in fact, have affordable meals while still paying producers fairly well and still having an amazing beautiful product. Food, I think, is one of the only places where this is possible.