Can you cook magic mushrooms?

Psilocybin edibles could replace CBD as the next big trend – but those looking to make their own at home should go slow, advocates say 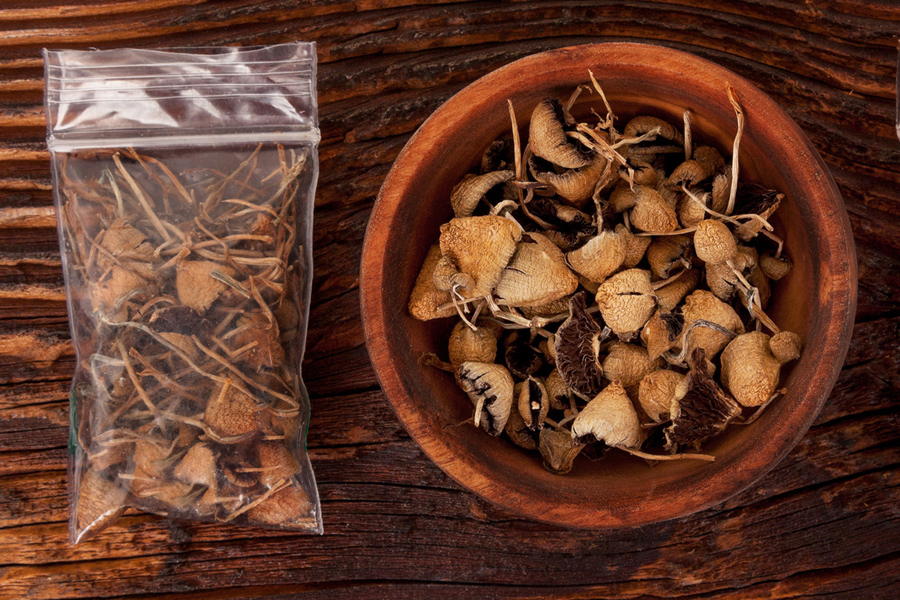 Dried fungi are one option for those who want to cook magic mushrooms – a rising trend in the era of increased psilocybin microdosing. (Getty Images)

Every few mornings since the start of the pandemic began, Jessica Nudo has had a special morning ritual.

To start her day, the freelance writer and content creator occasionally mixes dried psilocybin mushrooms with cacao, spices, oat milk, and some other herbs and anti-inflammatories for a morning latte.

“I found that I couldn’t leave the house, so at least I could go on a bit of a ‘trip’, as cheesy as that sounds,” she says.

“It helps to manage stress and anxiety during the pandemic, but also give myself a little something extra.”

Drinking magic mushrooms is nothing new – tea and juice have long been among the most popular psilocybin dosing methods.

But Nudo has her eye on a few new dosing methods – like a chocolate mousse, or even a delicate macaron.

With the era of boutique CBD and THC edibles in full swing, it looks like psilocybin-infused treats may very well be next.

“I truly believe there’s going to be a movement of really healthy snacks infused with psilocybin,” says Ceile Jesionka, a reiki practitioner who uses psilocybin as part of her practice, and offers consulting and education for individuals and groups on mushroom use.

“You can kind of look at the CBD market – it’s going down that road, for sure.”

Nudo, who’s planning to spread her growing appreciation for mushrooms with the launch of a new digital platform called Psilo & Spice, says she’s aware of no fewer than 10 brands currently experimenting with psilocybin edibles.

Jesionka is seeing a similar trend, but notes that it isn’t quite happening out in the open – yet. Over the past year, Jesionka traveled to the Netherlands, Switzerland, the U.K. and Jamaica to consult with others working in psychedelics. North America, she says, has quite a ways to go in terms of acceptance.

“I think, like cannabis, people are always led toward the black market – someone who knows someone will reach out to someone,” she says. “It’s still in the grey area.

“A lot of people are experimenting with it and then not talking about it because of the stigma attached. That hopefully won’t be a thing for much longer.”

To cook or not to cook magic mushrooms

With the explosion of the cannabis market, the edibles market has grown in tandem. On top of stoner classics like weed brownies, we’re now seeing CBD beverages, sweets in every flavour and style, and even full infused dinners hosted by big-name chefs.

However, ‘shroom aficionados have long advised users not to cook magic mushrooms, as the heat is said to degrade the potency of the active ingredients. But a few leading names in the mushroom world have recently refuted that theory.

The authors known as Virginia Haze and Dr. K Mandrake, who wrote The Psilocybin Mushroom Bible and the upcoming Psilocybin Chef Cookbook, say there’s currently no hard proof that heat degrades the potency of psilocybin.

“The advice to stay away from heat is largely anecdotal – that’s not to say that it’s wrong, but it is far from a proven fact,” the authors wrote in a recent Q&A.

“Our own experiences – we have made a LOT of shroom tea over the years, and have even baked it into brownies and things – have convinced us that any potency degradation with short heating is minimal, and even with longer baking times it doesn’t seem to affect it too badly, if at all.”

To keep everyone happy, the authors included both no-heat and low-heat ways to cook magic mushrooms in the upcoming book – but there’s also a risotto that uses blueberries for a flavour counterpoint, plus vegan burgers, pulled jackfruit tacos and a “shroomy grilled cheese”.

Jesionka’s specialty is chocolate-based products, though she’s also added psilocybin to salad dressings with (no-heat) infused oil, or made energy bites or smoothies.

Psilocybin has grown in mainstream awareness and acceptance – but so too, Jesionka says, has the number of people new to psilocybin who got a bit too cavalier with their first dose.

“If you have a bad experience once – like, say, with edibles, you’re not going to want to do it again,” she said. “We don’t want to just cook with psilocybin if we don’t know what’s going on. It can lead to a massive trip that someone’s not really expecting.”

In addition to improper dosing, poor mixing and distribution can lead to certain parts of the edible being far stronger than others. And the sugars in psilocybin can interact with food to cause digestive bloating.

“It’s really person to person. It’s very individual,” she says. “When people reach out to me and say ‘Ceile, I want to learn how to make this with psilocybin,’ they need to be educated as to how.”

Tea might not make for a super-flashy recipe, but Jesionka adds it’s a great place for newbies to start – it can be mixed with other herbs (ginger and mint are perennial faves) to help ease the nausea-inducing effects of psilocybin.

For her morning brew, Nudo uses a scale to measure out how much mushroom product ends up in a recipe. “I usually make something in the range of a 0.15 milligram to a 0.3,” she says. “That at least allows me to maintain a certain dosage, so I already know what’s in there. It basically eliminates all of the guesswork.”

But the ideal dosage and use method varies intensely, Jesionka says. As part of her consulting on psilocybin, she also points newbies to numerous articles and online sources so they can be as informed as possible about the trip they’re about to embark on – and suggests the same for anyone new to the drug.

This story has been updated from the printed version.