Two restaurant closings, and one reopening 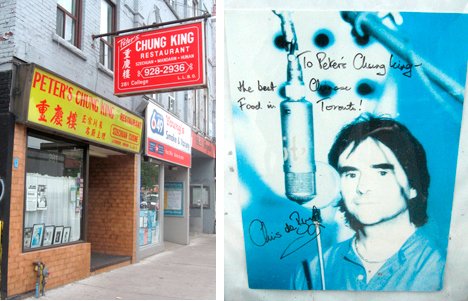 Back in the 70s, Peter’s Chung King – first on Dundas, then on College just west of Spadina – was the hottest restaurant in WASPy ol’ Hogtown back when fiery Szechuan cuisine was all the rage.

Along with Paul’s Deep Sea Shantung, Peter’s pioneered Toronto’s taste for incendiary regional specialties like MaPo-style beancurd and dry-fried long beans. The bare-bones operation was also famous for being home to some of the most openly hostile servers in the city. What wasn’t to love?

But it would appear that the venerable firepit has been shuttered for good. A sign on PCK’s front door says its, “closed for renovations” although the room looks exactly the same as it always has, right down to the sheets of polyethelene on the tables and autographed photograph of 80s balladeer Chris deBurgh in the window. Word has it that the kids behind nearby Simon Sushi are about to take over the historic space though the deal’s still to be sealed. Wanna bet there’ll be cheap student-friendly sushi on the menu?

Established in 1948, Lichee Garden would be the longest running Chinese restaurant in Toronto if it were still in business. While that honour goes to 50 year-old China House on Eglinton West, Lichee opened and closed four times in its six decade-plus career, first at Dundas and Elizabeth, then up on Eglinton followed by a short-run at Dundas and University and a final stint in Thornhill.

But watch for the retro Canadian-style Chinese chop suey joint to rise from the ashes yet again later this summer when vaudeville comic Red Skeleton‘s favourite beanery relaunches in the Theatre District. Here’s hoping the house specialty of Moy Tze Duck – an eye-popping combo of duck, lichee, pineapple and maraschino cherries – is still on the card! 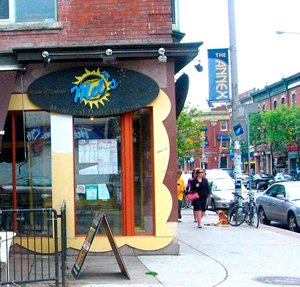 Mel’s in the Annex has dished up its last knish. Though it wasn’t the best deli in Toronto by any means, Mel’s Montreal Delicatessen on Bloor West at Howland was certainly one of the most popular. ‘Course most of that had to do with its proximity to U of T and its round-the-clock hours than the quality of its smoked meat and slow-motion service. No word on owner Melanie Simpson’s – yes Mel, is a woman – next move.