When Kensington Brewing Company opens its doors at 299 Augusta at the end of this month, itll be a monumental. 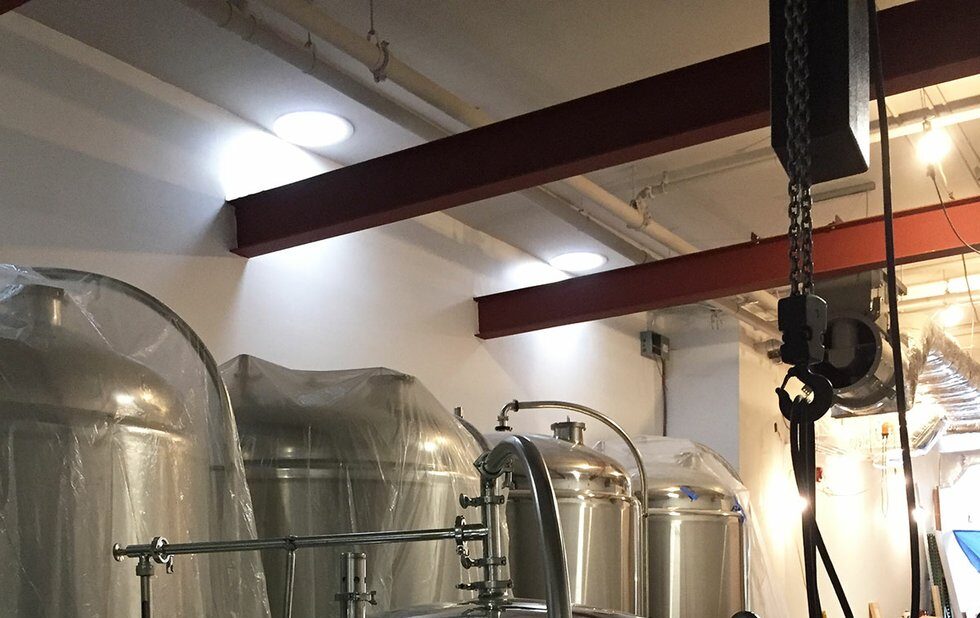 When Kensington Brewing Company opens its doors at 299 Augusta at the end of this month, itll be a monumental moment for the five-year-old brewery. Launched as a house brand in the back of the now-gone Burger Bar by Brock Shepherd, its taken the company more than four years to expand into their own production brewery, tap room and bottle shop. By June, theyll have all three, and they will be Kensington Market’s first brewery.

The space theyre in is long and narrow. Formerly a theatre, then a skate shop and most recently the home of Bread & Circus bar, the now redeveloped building has residential apartments above it. Kensington Brewing occupies the street-level and basement floors, which has made constructing a brew house particularly challenging.

We dont own the building so the space was developed with a lot of coordination with the landlord, says Michael Gurr, Kensington Brewings vice president of operations. There was a lot of construction, a lot of delays with zoning and permitting, and for two years after we acquired the space, nothing happened. It was kind of a dead site.

But when NOW toured the location at the end of April, things were looking up. The brewing tanks were newly installed, and the construction of bathrooms, a bottle shop, a poured-concrete bar and communal tables was being finalized.

Brewing beer takes three or four weeks to produce, so well start brewing next week and it will be ready by the end of May, Gurr explains.

The tap room will have a 40-person capacity and a 20-person patio out front, which they anticipate will be finished by mid-summer pending approval.

The focal point of the room is the production brewery, a collection of five stainless steel tanks that will produce 1,500 litres of beer at a time. A mechanical hoist helps lift bottles and kegs from the basement, a replacement for forklifts typically found in warehouses.

While the company has primarily focused on their Fisheye IPA and Market Pilsner in recent years, theyre looking to expand with more experimental offerings. This summer, theyll introduce new pale ale, sour and saison styles. Theyll also have a new logo and bottle packaging at the time of launch.

Were rebranding and getting back to where it all started, which is food. The inspiration for us is the Market and the surrounding food, restaurants and bars, says Gurr. Part of that means pairing beer and food in interesting ways, but also offering beer and food education, cooking classes and seminars.

Theyre currently working with Sanagans Meat Locker, just around the corner, to discuss a beer and butchery demo. And while they dont have a kitchen to produce food, theyre planning to serve prepared charcuterie boards from Sanagans, sandwiches and other cold snacks. They’re also donating a portion of sales of Kensington Brewings merchandise to benefit meals served at St. Stephens Community House across the street.

While Kensington Brewing is slated to be the first brewery to open, they wont be the last. Michael Duggan, owner and brewmaster of Parkdales popular Duggans Brewery, is part of a new venture, also launching in Kensington Market.

Its called B2B (Beer to Beer), which will have a small brewery on premise, confirms. Thats what I am responsible for, so its kind of a Duggans, but not exactly.

With brewing equipment already on site at 319 Augusta, Duggan hopes to be open by summer. Coincidentally, that location, where Kensington Pop-Up currently lives, used to house Burger Bar. The former restaurant was owned by none other than Kensington Brewery’s founder Shepherd, who took an interest in craft beer at the time.

I turned it into a craft beer joint and started rotating taps, Shepherd recalls. Eventually, I looked into getting our own beer made and started Kensington Brewing Company.

While Shepherd is no longer with the brewery, hes still involved in beer. Earlier this year, he launched an event at Wynchwood Barns called Trashed & Wasted, which encouraged participating restaurants to create dishes from typically discarded ingredients, such as animal skins and the odd ends of produce. There was a liquor component, with spirits made from whey leftover from cheese making and beer created from leftover bread.

This summer, hell bring Trashed & Wasted to Kensington Market in the form of a flea market during Pedestrian Sundays. The first one takes place June 25 behind El Gordo Fine Foods (214 Augusta), with plans to pop up once a month.

Its a unique backyard space that Im renting from them, and Im adding a beer component as well, says Shepherd, adding that each beer garden will be themed. One of them will be out-of-town breweries that arent represented here. Another, will hopefully be Kensington breweries.

He says that in addition to Kensington Brewing and Duggans project, Collective Arts Brewing based out of Hamilton has been seeking out space.

Theyve secured the spot in the old Zimmermans Freshmart space [241 Augusta] just north of Baldwin, but its all conditional to them getting approval from the city, Shepherd explains. When I was dealing with Kensington, that took a long time, but hopefully we paved the way to make it easier for them. (A spokesperson for Collective Arts stated that plans to open in Kensington Market are “still in discussion”).

Gurr has also heard news about Collective Arts and Duggans, and is excited by the news. He hopes Kensington Market grows into a craft beer hub, calling the neighbourhood a natural fit for breweries.

Theres been a big shift around here the past 10 years, a lot of younger local artisans who are picking up the torch from the old Kensington, but I think were doing things in new and interesting ways, he says. Our brewery is staying true to the values of Kensington Market, which are community, quality and small business.

Shepherd adds that beer-focused restaurants such as Trinity Commons, which boasts over 30 brews on taps, helps diversify the neighbourhoods offerings. With at least two breweries slated to open soon, it will make Kensington a beer destination.