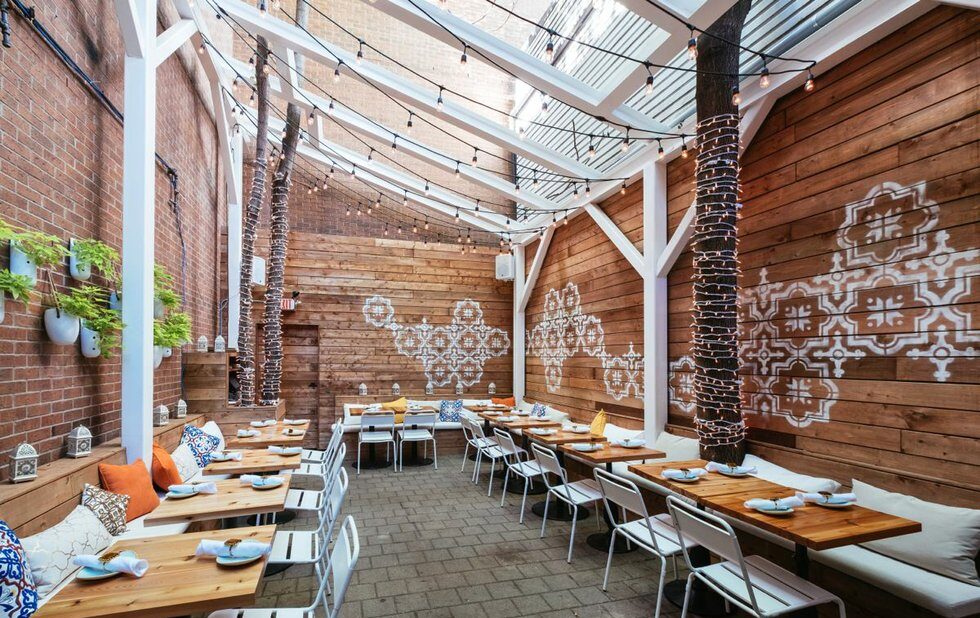 Be among the first to check out this new Port Lands arrival, an older sibling to the Dock Ellis, which features a 130-seat wraparound patio. The patio space is currently partially open, with the rest to open in the next few weeks. 484A Front, at Tannery, 647-352-7837, aviarybrewpub.com

Yorkville is covered-patio central, thanks to the presence of Hemingway’s and the Pilot. But Reyna, with its throw pillows and modern-bohemian vibe, is definitely one of the cutest. On top of that (literally), Reyna’s rooftop patio is also open! 158 Cumberland, at Avenue, 647-748-4464, barreyna.com

This Queen East taqueria and party spot has officially hauled out the patio chairs on its two patios for another season. 884 Queen East, at Logan, 647-352-0884, barrioonqueen.com

After melting snowbanks full of cigarette butts, the second surefire sign of spring in Toronto is seeing a lineup form for the patio outside this Queen West standby. 298 Queen West, at Soho, 416-593-2766, facebook.com/blackbulltoronto

Knock back a latte or a pint at this Harbourfront bar-cafe’s sizeable waterside deck. 235 Queens Quay West, at Lower Simcoe, 844-726-9227, boxcarsocial.ca

If chowing down on Detroit-style deep-dish pizza under a pink patio umbrella sounds like the perfect way to kick off spring, this east-end joint has you covered. 1020 Gerrard East, at Marjory, doubledspizzas.com

The east end’s favourite dog-friendly patio is back in action again for the warmer months here’s the proof you’re looking for. 1173 Dundas East, at Carlaw, 647-639-7281, instagram.com/dundasandcarlaw

The riotously coloured heated patio at this Mexican destination in the distillery gets even better when it’s above freezing outside. 18 Tankhouse, at Cherry, 416-203-2121, elcatrin.ca

The heating and retractable canopies at this Yorkville rooftop deck make it the perfect place to beat the spring-evening chill. 142 Cumberland, at Avenue, 416-968-2828, hemingways.to

Good news for the King West after-work crowd: The sizeable front patio at this downtown brewery is back in business for the season. 115 Bathurst, at Adelaide, 416-540-4030, northernmaverick.ca

Formerly Mad Crush Wine Bar, this modern pub from the people behind Queen and Beaver offers a streetside patio perfect for people-watching on College. 582 College, at Clinton, 647-350-8111, thepeacockpub.ca

Drake’s upscale eatery just got reinvented as a sports bar with an all-new menu – but the retractable roof over the luxe patio off Yonge Street is still intact. 33 Yonge, at Wellington, 416-861-9966, pick6ixsports.com

A perennial west-end favourite, the Three Speed has already fired up the fairy lights on their secluded back patio. Grab a plate of steamy mussels if things cool down in the evening. 1163 Bloor West, at Brock, 647-430-3834, instagram.com/thethreespeedbar

Kensington has its share of patios, but Trinity Common’s sidewalk-adjacent outdoor space is easily the roomiest. 303 Augusta, at College, 647-346-3030, trinitycommon.com