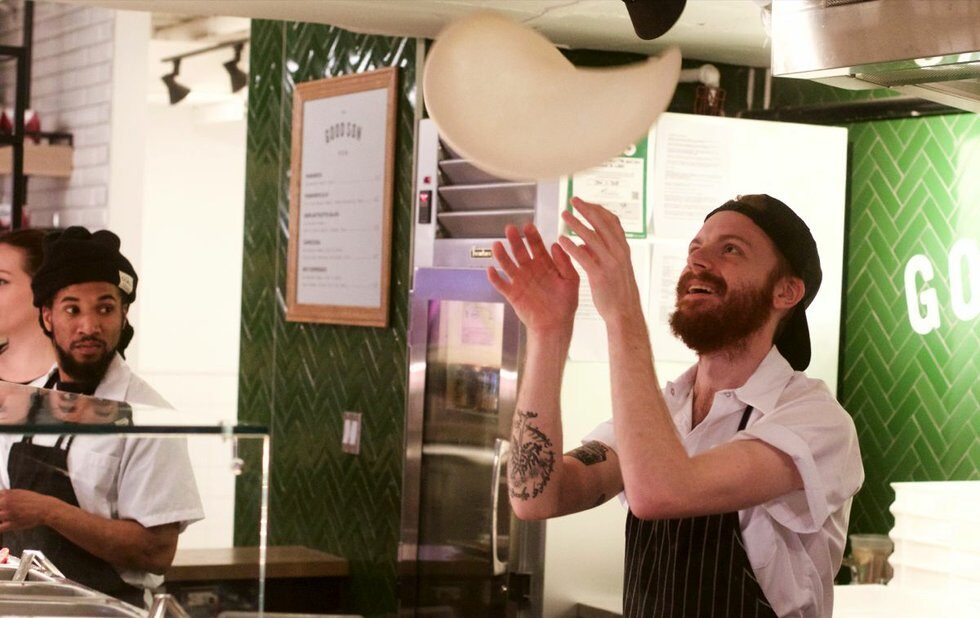 Andreas Antoniou, the restaurateur (hes been a partner in Volos, Los Colibris and Little Anthony’s) who spearheaded the project, says Assembly is about bringing top-quality eats including restaurants otherwise unable to afford downtown rents into one accessible spot.

Its giving people downtown, finally, the choice to have that experience that youd normally have to leave the core to enjoy, Antoniou says. Youre doing it under one roof, and youre doing it in a way that the cumulative sum of those chefs comes together to form this amazing experience.

Underneath Googles Richmond Street headquarters, the warren-like Assembly space spans 18,000 square feet (set to expand another 4,000 square feet when a massive patio is added come summertime). Guests can snag everything from tacos and BBQ to fresh lobster and sashimi, wash it down with a latte, pint or draught margarita, and linger in one of two large seating areas outfitted with communal tables. Seventeen of the stalls are permanent, while one operates on a rotating pop-up basis.

One month post-soft-launch, lunch appears (perhaps unsurprisingly) to be the biggest draw, but Antoniou hopes Assembly, which welcomes guest DJs several times a week and will soon begin booking events, will become a round-the-clock destination.

I know when I go out, its always a debate about what youre going to have, he says. My friends who are vegan have multiple options in this space. My friends who want omakase theyre able to do that. You can be in and out in 10 minutes or you can have your 30th birthday here for three hours and have a cake brought over to your table from (in-house bakery) Short & Sweet.

Heres a closer look at the space and menu:

The Junctions Love Chix has been one of the biggest early hits at Assembly, thanks to its modified menu focusing on hot honey-tossed fried chicken. At lunch, grab a three-piece combo with Grana-Padano-lemon brussels sprouts five-piece platters are available in the evening. (Fun fact: The booth’s mural was designed by NOW’s very own Clayton Hanmer!)

Mira Mira, the brainchild of former Chase chef Amira Becarevic, is one of a handful of restaurants exclusive to the hall. (The company also does private catering.) Becarevic rides the line between health-oriented and flavourful, offering dishes like smoky BBQ okra with cauliflower gratin, vegan queso and purple cabbage.

After Ivana Raca bonded with Chopped Canada host Brad Smith during her victorious turn on the program, the duo teamed up to open Resto Boemo. (Stop by, and youll see them working the line together.) Racas gnocchi (in truffle mushroom cream or tomato-chorizo sauce) are a menu staple, but the super-decadent burger might be the sleeper hit.

Pizzeria Libretto has some competition: You can now get entire pies from Vittorio Colacittis Queen West trattoria The Good Son downtown. Among the five options: a D.O.P. Margherita with San Marzano tomatoes, bufala and basil.

North York bakeshop Short & Sweet is bringing its cupcakes, cookies and show-stopping cakes (available by the slice or whole) downtown for the first time. Celebrating a special occasion? For $50, theyll deliver a candle-and-sparkler-laden cake to your table.

Any cross-section of the Toronto food scene needs a killer ramen spot. Ramen Isshin (which already boasts one outpost on College) holds things down nicely, offering a half-dozen noodle soup options, plus classic snacks like takoyaki and gyoza.

Ever seen a food court with an omakase spot? Tachi, one of two concepts at Assembly from Shoushin chef Jackie Lin, is a tasting menu-oriented counter thats exclusively standing room only. Guests are welcomed in half-hour windows, with only eight folks allowed at a time inside, youll be served one piece of ultra fresh saltwater sushi after the next at the counter. The whole experience costs $45.

Shari is Lins less-regimented contribution to Assembly a chill service counter where you can pick up chirashi boxes featuring top-quality sushi served on a bed of the perfectly-mixed sushi rice (shari in Japanese) that gives the restaurant its name.

Chef Elia Herrera brings her modern-Mexican flair to Colibri, a scaled-down version of her King St. joints Los Colibris and El Caballito. Tacos, including lamb barbacoa, crispy Baja fish and beef alambre, are built on tortillas fresh-pressed right at the booth. Top them off with one of eight housemade hot sauces.

Brother-sister outfit Hibiscus, based in Kensington Market, is holding it down for the vegan and GF crowd with treats like sea buckthorn ice cream and hearty eats like their 42-ingredient salad (featuring quinoa, sweet potato, broccoli, lentil, kelp noodles and more).

Save yourself the 10-block walk to Thai fave Khao San Road and snag chef Top Srisomphans pad gra prao at Little Khao. (How cute is that neon elephant?)