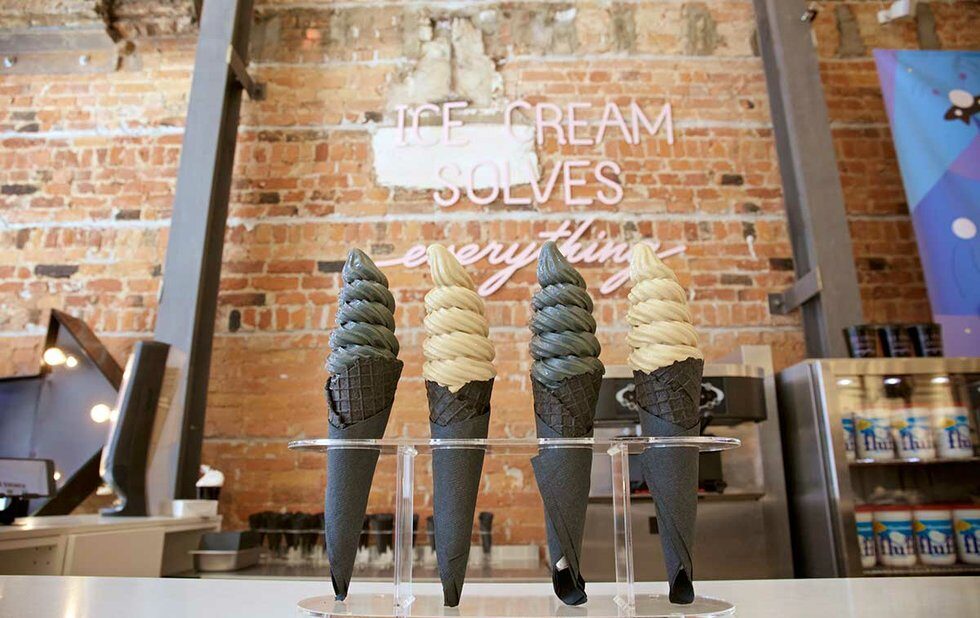 Four flavours of iHalo Krunch soft serve are available at the Lululemon pop-up for the next three months.

If you followed a Toronto foodie’s Instagram account last summer, you were subject to seeing at least one photo of black ice cream on their feed. Charcoal soft serve, or “goth cream,” swept the city by storm, and ground zero was undoubtedly iHalo Krunch.

At the time, the newly opened ice cream spot across from Trinity Bellwoods caused a bit of frenzy, especially when a line would magically appear and wrap around the block. Folks of all ages stood in the hot sun for a taste (and photo op) of the company’s signature charcoal ice-cream on charcoal cone.

Recently, iHalo Krunch announced a move to a bigger location later this summer. Their new spot will be just a few blocks down at 831 Queen West (at Niagara), replacing YNOT Cycle.

Additionally, they’ve launched a pop-up location inside Lululemon’s flagship (318 Queen West) that’s open every day for the next three months. Finally, ice cream and yoga pants together in one spot (that’s not your couch).

The pop-up coincides with the Toronto Waterfront 10K, a June run that the Vancouver-based athletic brand is sponsoring this year. A such, the four flavours of ice cream on offer match the race’s official colours: ube-nut, matcha, Vietnamese coffee and lychee.

Visit the iHalo Krunch pop-up Mondays to Saturdays 12 to 8 pm and Sundays 12 to 7 pm.