Inside the Cheesecake Factory location in Yorkdale 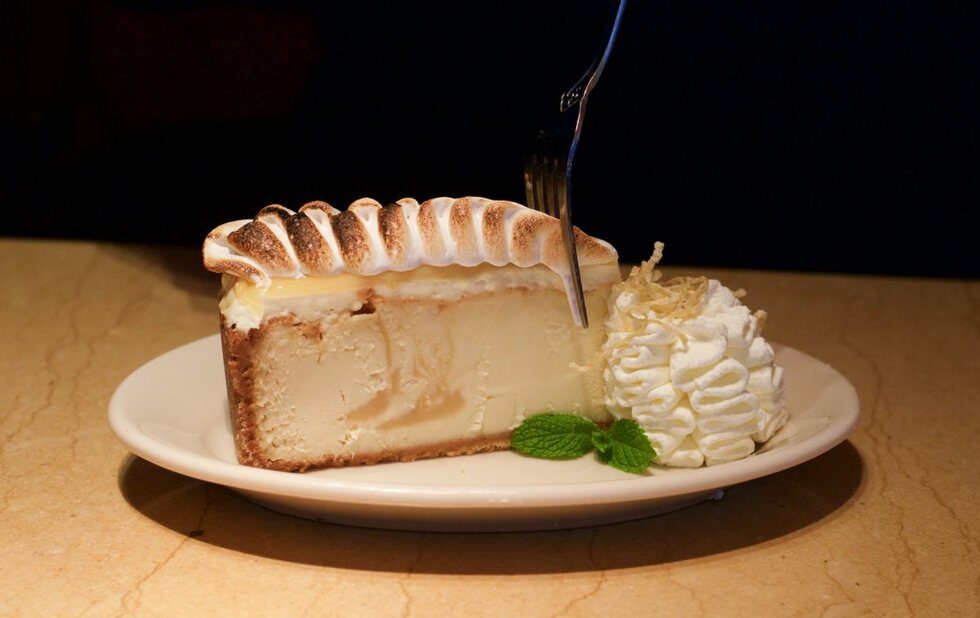 The Cheesecake Factory is about to throw open the doors to its very first Canadian location at Yorkdale (3401 Dufferin, 416-781-4477, thecheesecakefactory.com). The mammoth new location spans over 10,000 square feet within the shopping centre, finally allowing Canadians to slide deep, deep down a butter-greased rabbit hole of high-piled family favourites on their home turf.

Cheesecake — 33 flavours of it — is of course the cornerstone of the Factory’s appeal, but it’s also just the tip of the foodberg here. The menu contains a head-spinning 250 items spanning from vegan cobb salads to mac-and-cheese-topped burgers to ethnic-lite entrees (miso salmon, tamales and “bang bang” Thai chicken), all of which, the company says, are made in-house. Appetizers are entree-sized entrees feed a family of four. 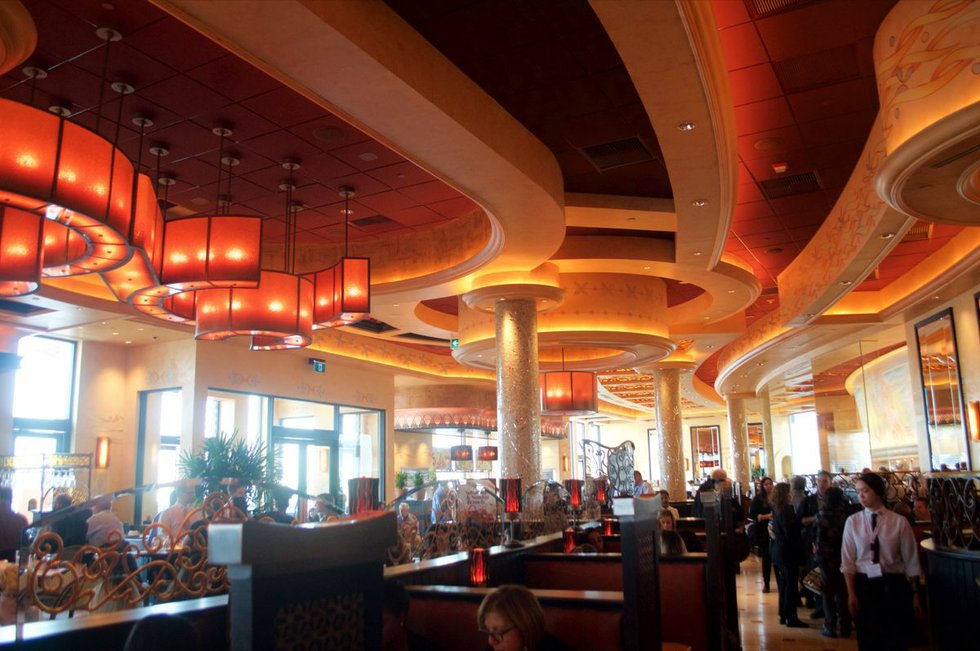 These hearty eats are doled out in cavernous digs that look like a very fancy Pier One Imports, circa 1996. Scroll motifs of all kinds wriggle across the ceilings, moulding and furniture, with curlicue lighting bathing everything in a rusty glow. The look is faithfully, meticulously duplicated across all Cheesecake locations — you could be in Topeka or Duluth or Sedona (or Toronto!) and you’d get precisely the same experience.

That level of faithful replication will likely serve them well with the Canadian public. As we learned all too well from Target Canada, Canadians get mega-hyped about American franchises coming north of the border, and reserve zero patience for the ones that don’t hold up to those rosy vacation memories. 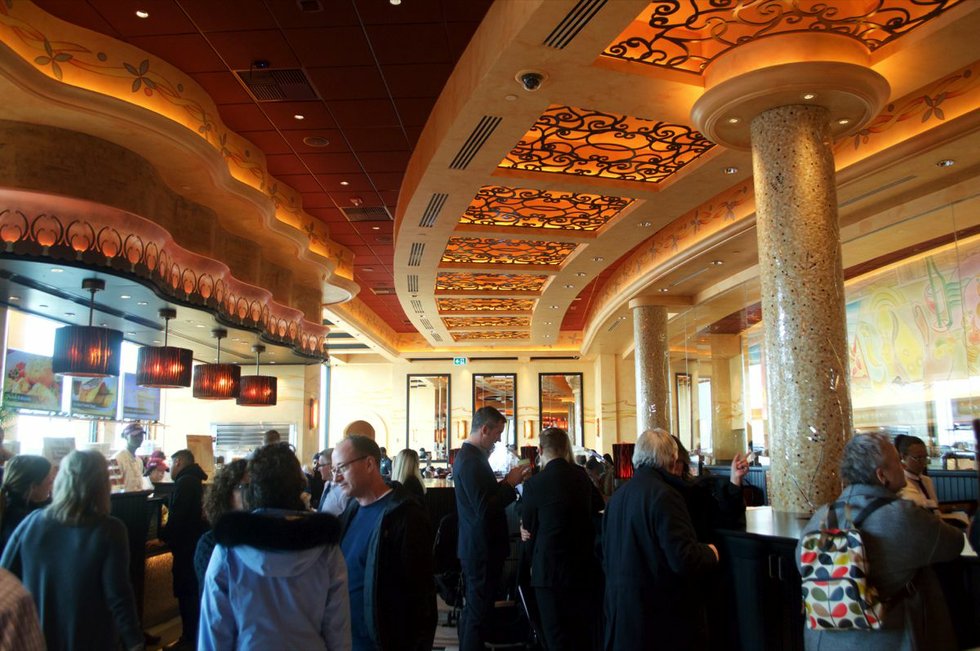 To get the new location up to standard, they flew in 30 trainers from other locations around the U.S., who could be seen bustling around in chef’s whites bearing embroidered crests for each of their home restaurants. Company founder David Overton also attended — rumour has it he’s personally visited every single new location to ensure it conforms to company standards.

Before visiting the Yorkdale location, I myself was a Cheesecake Factory newbie, having limited most of my American chain dine-ventures to Big Boy, Shake Shack and Benihana. So when Cheesecake invited me to come check out the new spot during their friends and family soft launch, I enlisted an expert, NOW online editor Michelle da Silva, to be my guide up the mountain of fried shrimp. 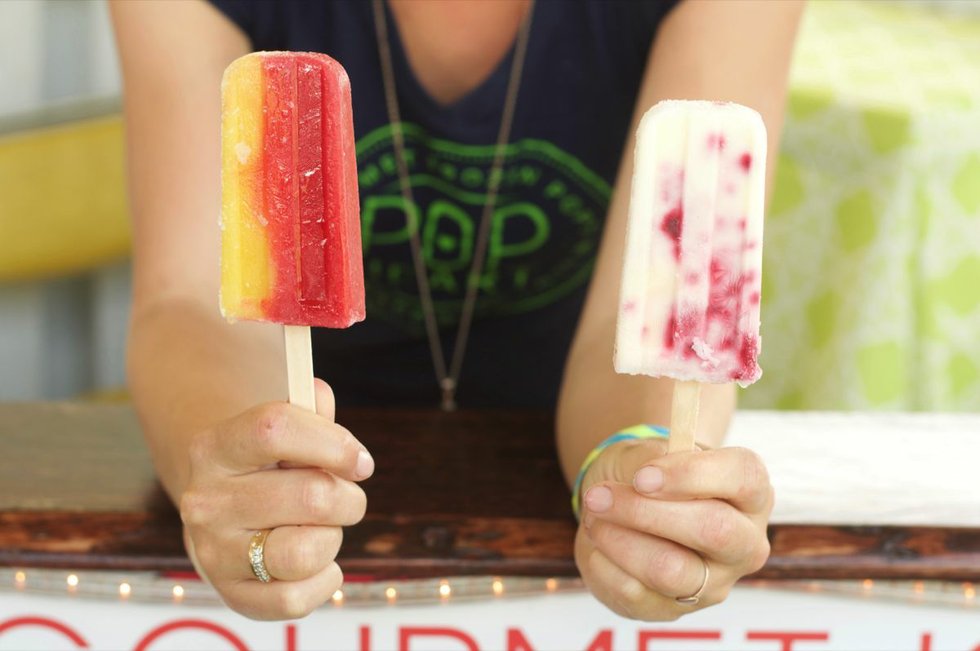 Four days before the official opening, the place was bustling with company brass, black-clad servers and friends-and-family guinea pigs (including us). We were asked to choose from a randomized section of the menu — we got picks from “specialties” and “steaks, chops, fish and seafood” — in order to help the kitchen get well-rounded practice with all sections of the massive menu.

That led to some low-key dining envy. (Is that a Glamburger I spy at the next table? Can I grab one in case I have to fight Mettaton?) But it was also a blessing in disguise. If I’d been presented with a full menu, I likely would have been so freaked out by the sheer number of options I would have just stabbed a finger into the menu to order (and maybe blacked out afterward). With the help of our wonderful trainee server Alex (and, I suppose, the trainer who was hovering three feet away watching him interact with us) we finally submitted our picks. 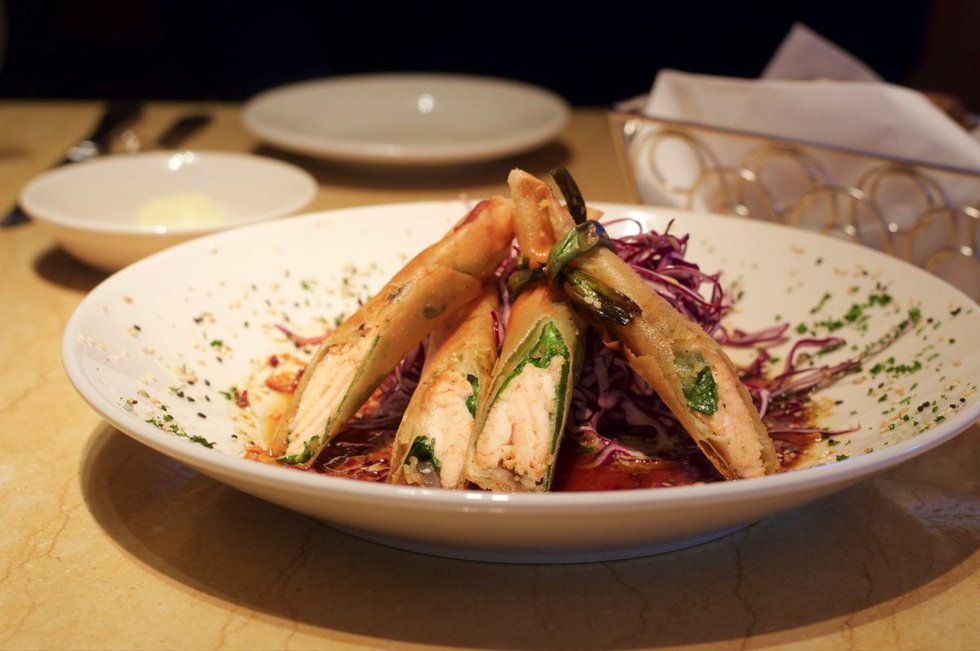 We only tried 1.6% of the menu during our visit, so I cannot speak authoritatively on the quality of the food as a whole, but each dish had its own highs and lows.

The “Firecracker” salmon rolls ($15.95) were kind of greasy, but came with a pretty good soy dressing. The marsala chicken ($25.95) and ‘shrooms were perfectly cooked, but the bed of bowtie pasta was hard and oily and clashed with the too-sweet sauce. The “Cajun chicken littles” ($21.95) could have been more crisply fried, but I mowed right through the mashed potatoes.

Despite our valiant efforts, we only finished half our entrees, what with there being 10 “littles” (actually full-sized chicken tenders) and a whole box of pasta upon our plates. 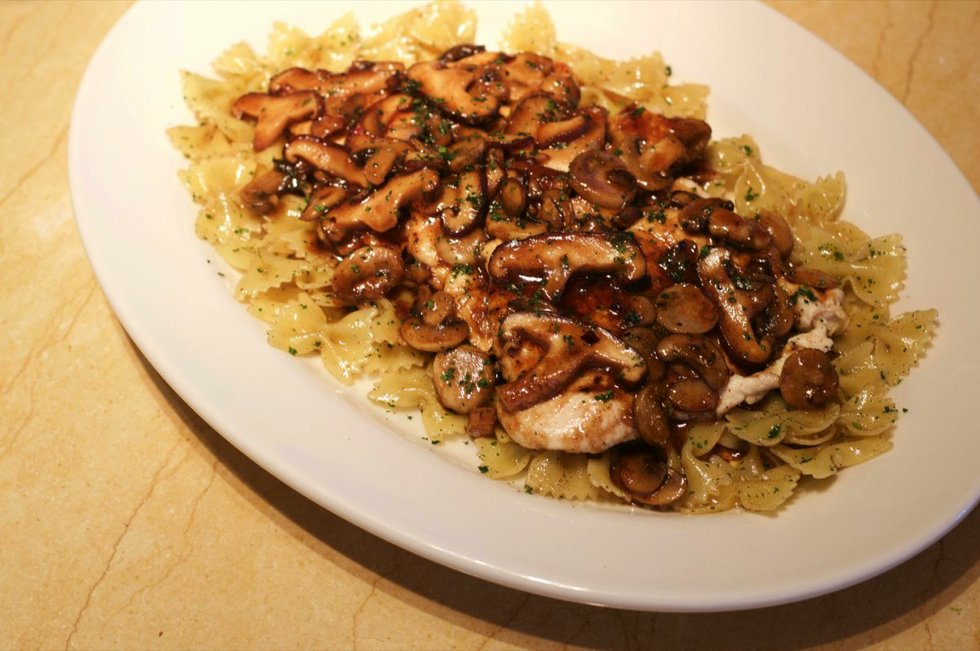 Of course, Michelle and I mused as we sat at our table, waiting for digestion to take its course, food quality isn’t necessarily the reason why people get hyped about chains like these. Michelle has a soft spot for the Cheesecake Factory because she went there in Hawaii with her family as a teenager and has fond memories of sitting in a faraway exotic locale, being presented with a gigantic platter of fried something-or-other — regardless of what the contents of the plate actually were.

I may not be bugging people to make the trek north to Cheesecake with me after this. But this summer, I badgered three of my food-industry buds into coming with me to Benihana, after learning that none of them had ever experienced the joy of watching a dude flip a shrimp tail into his own hat before serving them $18 fried rice drenched in garlic butter. I get pumped about Benihana because my family would make special trips there for birthdays (and also because the dipping sauces are dope). In the end, I had to agree with my friends that the food wasn’t really worth the $50 or so we each paid — but I will love Benihana until I draw my last breath, because for me, Benihana is a thing. 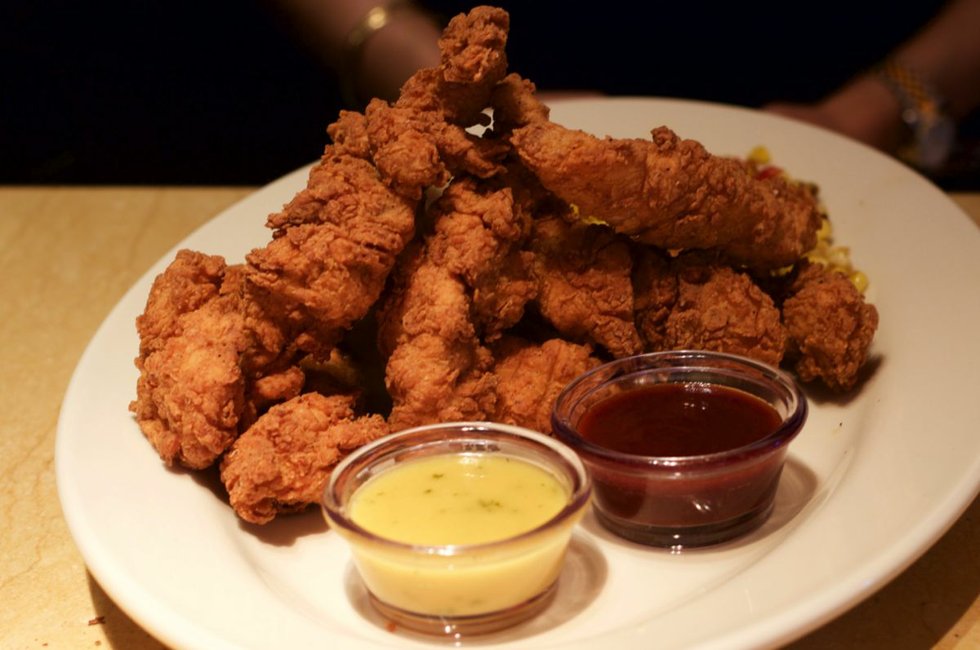 The thing-ness of the Cheesecake Factory — that tightly-held nostalgia, preserved from cross-border road trips of yesteryear — will no doubt reel in a steady inaugural crowd of diners at Yorkdale, and the suburban location will likely prove to be a canny choice. (I truly don’t think downtown Toronto is ready for this.)

Whether or not they can build a loyal base of brand-new Canadian customers still remains to be seen. They do have, of course, one big thing working in their favour. 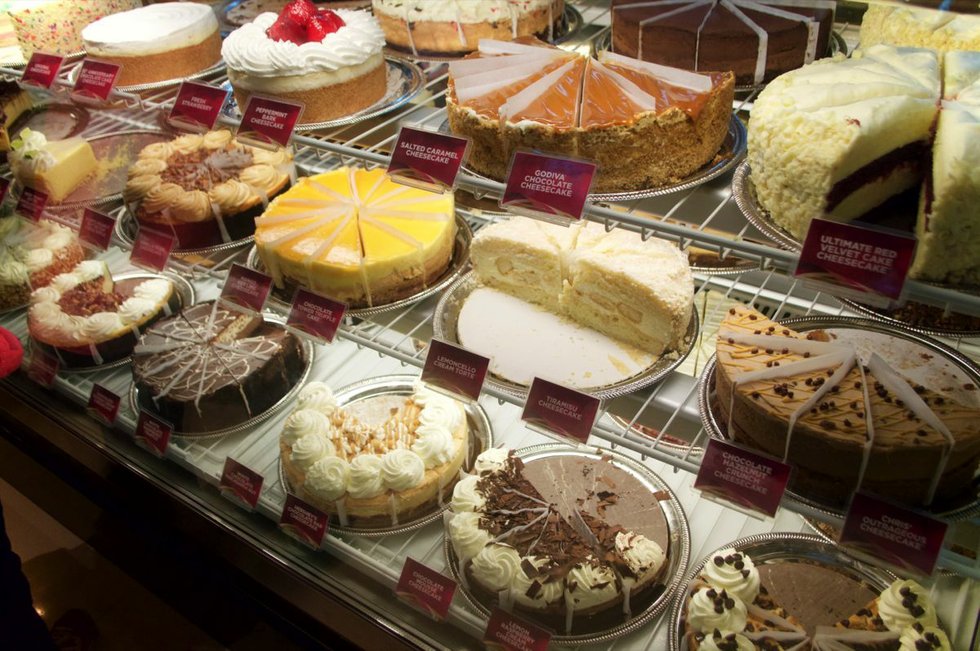 The cheesecake menu came round (once more unto the breach). Michelle and I chose the lemon meringue. It arrived in a sizeable slab, topped with a melty meringue and swirled through with a whisper of lemon curd. It was rich, but smooth and airy, not overly sweet, somehow light enough that we could still somehow find room for one or three or seven extra bites.

I know. I’m just as shocked as you are.

The Cheesecake Factory Yorkdale opens to the public Tuesday, November 21.