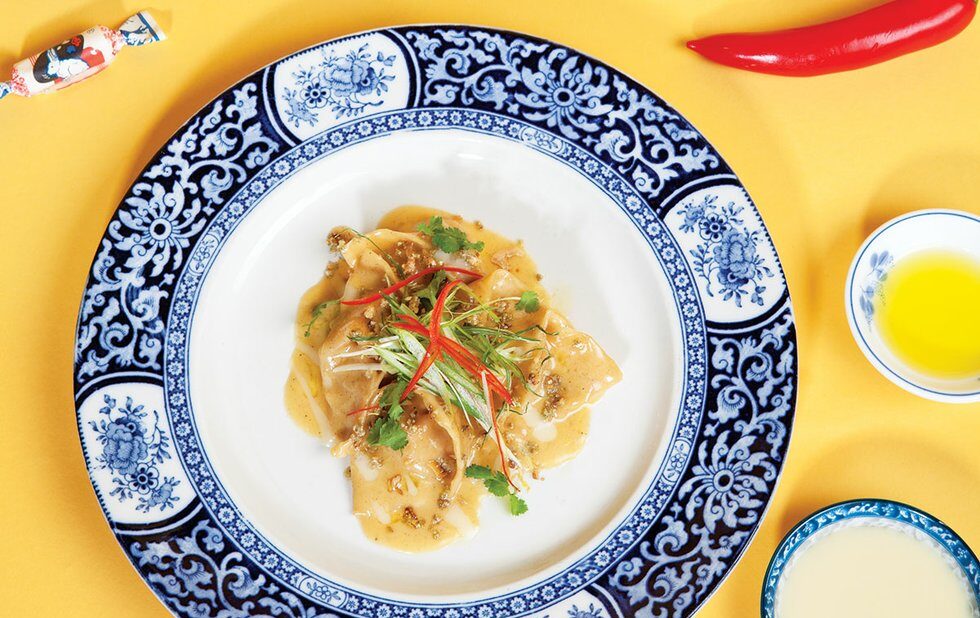 When author Amy Rosen began compiling Toronto Eats, the follow-up to her 2014 book Toronto Cooks, she had only one restaurant dish on her wish list: the pumpkin dumplings at DaiLo. Nick Liu, the chef behind the College Street spot, kindly revealed his secrets for the book. Amazingly, most of the ingredients for Liu’s showstopping dish can already be found in a reasonably well-stocked kitchen, or on the cheap at Asian markets.

Liu’s original presentation includes truffle shavings (which we omit here) and truffle-infused oil. Even if you skip the finishing drizzle of truffle oil, with this much bright, sweet, spicy and rich flavour on the plate, we promise your guests won’t complain.

Preheat oven to 425°F. Cut pumpkin or squash in half and scoop out seeds. Drizzle oil on both fleshy halves and sprinkle with 3 tbsp brown sugar, salt, garlic, ginger and thyme. Place on a baking sheet skin-side down and bake for 1 hour, or until flesh is soft and caramelized.

Discard ginger and thyme, scoop out flesh, and place in a food processor. Add rice vinegar and purée until smooth. Taste and season with additional salt and brown sugar if necessary.

On a clean surface, set out 5 wonton skins. Place 1 tbsp of purée in the centre of each skin. Brush two edges of the wonton skins with egg and fold over to create a triangle. Press along the edges with your fingers to seal each dumpling. Brush a small amount of egg wash on one of the corners and connect two corners, sealing them to form a tortellini-style dumpling. Repeat process with remaining wonton skins. Keep dumplings in the fridge or freezer until assembly.

In a small saucepan on high heat, melt butter. Reduce heat to medium-low, wait until butter splits and cook until milk solids turn golden brown. Whisk the bottom of the pan frequently to scrape off any toasted milk solids. (Be careful not to burn your butter!)

Remove saucepan from the heat and set aside to cool slightly. Add cream and soy sauce while mixing well to make sure the sauce emulsifies. Put aside until assembly.

Place candy and cream in a small saucepan and cook on medium heat for 5 minutes, until candy has melted and thickened into a thin glaze.

Bring a pot of water to a boil, add dumplings and cook for 4 minutes, or until they start to float. Meanwhile, in a saucepan, heat brown butter sauce, making sure it stays emulsified. (Tip: Heat a tablespoon of cream in your pan before adding brown butter sauce to prevent sauce from splitting.)

Drain dumplings and add them to the saucepan with 2 tbsp of the cooking water. Toss and cook until sauce thickens slightly. Add a squeeze of lemon juice to adjust the acid balance.

Place 5 dumplings on each plate along with some of the sauce. Drizzle a small amount of White Rabbit candy glaze over the dumplings. Sprinkle with almond crumble, drizzle with truffle oil (if desired), and garnish with scallion, red chili and cilantro. Sprinkle a little lemon zest over the dumplings.

Check out the rest of our 2017 Holiday Food & Drink Special: