Dinner With A View’s burst bubble 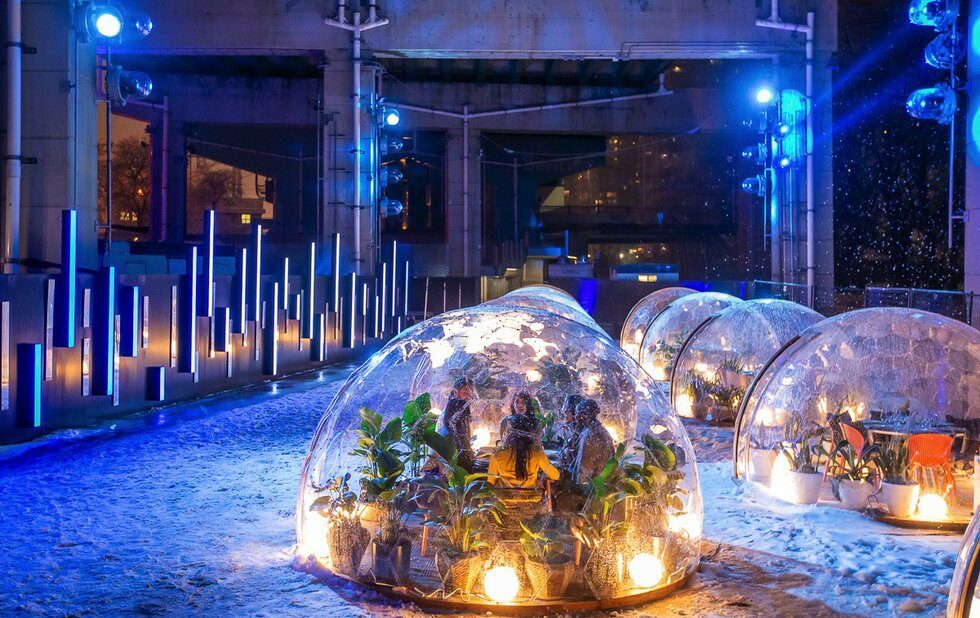 Dinner With A View makes the jokes way too easy, but here goes: This spring, you can enjoy a luxury meal from the comfort and safety of your own little bubble.

The dining pop-up, which lets you spend an evening (well, an hour and 45 minutes) inside a clear sphere kitted out with modern furniture and potted plants, began its month-long run on the Bentway, transforming the public space underneath the Gardiner into “a wondrous environment perfect for sharing via social,” according to the website.

The event, which runs until May 2 before it moves to Montreal, features three timed seatings per night of a surprise three-course dinner by a Top Chef Canada winner. Powered by a sponsorship from American Express, the event has been touted as the next wave in fine dining by a number of local publications (in their advertorial sections, mostly).

Dining inside a cozy miniature terrarium – a trend spreading to upmarket dining destinations across North America – is a neat enough idea, one that’s guaranteed to get attention in a crowded food media landscape that falls easily for gimmickry.

And the images from the event, with little geodesic jujubes glowing softly while silhouetted people walk past, are undeniably striking. In fact, the view from outside the domes is probably far more scenic than the one from within. I mean, I love exposed concrete and beams as much as the next trashbag millennial, but Montreal‘s upcoming version of the event gets a waterfront view and a Ferris wheel.

It’s guaranteed Instagram gold, to be sure. But I’m still genuinely surprised that so many people – well over 10,000 of them, if the “95 per cent sold out” note on the event’s website is accurate – are willing to shell out to be a part of it.

Just renting the dome costs $150 (which would, in theory, be split between four to six diners), then each person has to pony up $99 for the menu. That’s between $125 and $136, not counting gratuity, taxes and a hefty processing fee, for three courses.

That sum would just about buy you a seat at the chef’s table at Alo, which is generally regarded, at this point, to be the single best restaurant in Canada. Edulis‘ tasting menus, at five and seven courses, are $65 and $90. Even at Canoe, a Bay St. expense account magnet that offers dinner with an actual view from its 44th-floor perch above the lake, the tasting menu is $115.

But that’s somewhat beside the point. At Dinner With A View, you’re paying a premium to be able to say you were there, and to get the photos to prove it.

That isn’t unique to Dinner With A View, by any means. Recent pop-up events like Happy Place and the newly-opened HideSeek are designed to part guests from their money in exchange for access to outlandish selfie backdrops. Restaurants now design dishes and interiors with Instagram in mind. If you didn’t post a mirror selfie from Yayoi Kusama’s Infinity Mirrors last year, did you even go?

But can a two-hour dining experience – not just the cachet that comes from the experience, but the actual experience itself – truly live up to that kind of ticket price?

I’m a grouchy cheapskate, so I’m inclined to say no. But, as it turns out, some of the people who have scraped their way into The Dome Where It Happens actually seem to agree with me.

I heard whispers from folks who attended a preview event, which doubled as a dry run for the pop-up, that the miniature bubbles were drafty and ill-equipped to handle the early spring chill, that the food was mediocre and that, fed up for the long wait for their meals to arrive, a number of guests simply got up and left. Dry runs are dry runs for a reason – but since the paying customers started rolling in, some have complained on social media about tiny servings and stingy service. (That price tag doesn’t even include water.)

Until a couple of weeks ago, a stretch of the Gardiner located a stone’s throw away from the Bentway was home to a tent city that hosted a sizeable homeless population. City staff demolished the tent camp on March 13, citing public safety concerns, following an eviction order issued back in January. Though city staff said they would make an effort to find the camp’s residents other accommodations within the shelter system, the city’s shelters are perpetually struggling with overcrowding – especially true in the wake of this brutally cold winter.

Activist group Ontario Coalition Against Poverty (OCAP) has since launched a counter-event, the snappily titled Dinner With A View Of The Rich, scheduled for Friday (April 5). As part of the event, organizers plan to serve a free, volunteer-cooked dinner to all attendees. “Together we’ll eat, be lively and take in the view of the brazenness of the wealthy and the brutality of the city,” they wrote on the event’s Facebook page.

The pop-up is not located on the same site as the homeless camp – the locations are roughly two kilometres apart – though OCAP notes in a blog post that there were multiple homeless camps under the Gardiner this winter, stretching from Jarvis to Spadina, that were also evicted over the winter.

In response to the protest, Dinner With A View released a statement Tuesday evening: “We are sympathetic to those impacted by the City’s actions and were in no way involved with the decision making process. No encampments were removed to make way for Dinner With A View,” they wrote.

The event’s organizers added that funds paid for use of the space to the Bentway, which is operated by a not-for-profit, go back into funding the space’s free and low-cost programming.

“We aren’t arguing that the pop-up campaigned for the eviction of homeless people,” OCAP’s Yogi Acharya counters via email. “We’re pointing out the brutality of the City evicting homeless people with nowhere else to go, and the brazenness of putting on a luxurious dining spectacle so close where people were hungry and cold all winter. It’s another example of the skewed priorities of the City.”

Acharya added that following the April 5 protest, OCAP will be at Metro Hall on April 12 “to demand the City not close homeless respite sites, expropriate vacant land and build rent-geared-to-income housing,” he said.

“If organizers of the pop-up restaurant publicly demanded the same of the Mayor, they’d be a bit more respectable.”

As OCAP’s response illustrates, the pop-up has become a flashpoint for a broader sense of public anger that, at its root, is stoked by much more than just Dinner With A View, who just came here to get people to pay to Instagram some fancy domes and are probably Feeling Very Attacked right now.

The pop-up is far from the only event – or restaurant, or store, or bar, or cafe, or gallery, or condo development, or boutique hotel – to arrive in an area, target a more moneyed clientele than the area’s previous residents and ignore the wave of gentrification that allowed them to get there. (I mean, I just spent an entire paragraph listing other restaurants with fancy tasting menus in the downtown core that Dinner With A View’s diners could be splashing out at instead.)

But, coincidental though it may be, the one-two punch of an event that flaunts its luxuriousness and exclusivity, juxtaposed with a jarring demonstration of just how precarious safety and resources are for the city’s most vulnerable, has undeniably poked a deep wound within a city that’s struggling to define who is entitled to take up space (and where).

For now, the last few Dinner With A View tickets are still on sale – but at this point, I’m willing to bet a lot fewer people are dying to post their #DWAV selfies.