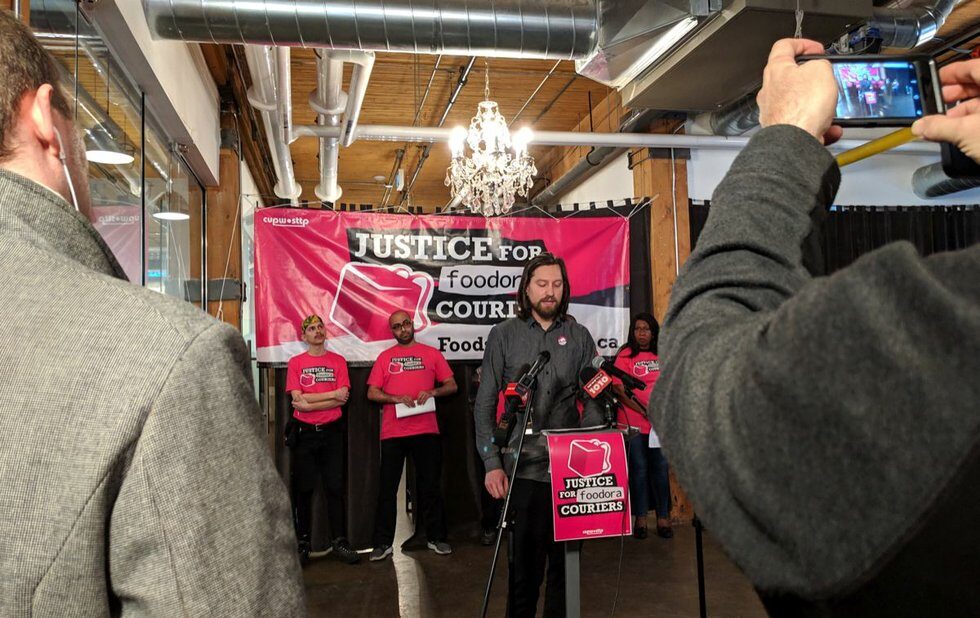 Foodora couriers are teaming up with the Canadian Union of Postal Workers (CUPW) to launch a union drive among the company’s food delivery cyclists and drivers.

“Justice for Foodora Couriers wants fair compensation for dangerous work, the ability to recover when sick or injured, and a respectful workplace free from harassment and intimidation for our fellow food couriers,” the union writes on Foodsters United, a newly-launched campaign site.

CUPW is launching a series of events as part of the campaign, beginning with a march to Nathan Philips Square on May 15, in an effort to garner further support among the company’s workers in Toronto and across Ontario.

The German-based food delivery company, like other local food delivery services, classifies its workers as independent contractors, exempting them from paying workers vacation and sick leave and putting the onus of paying for necessary items like cell phone data, warm-weather gear and bike/car maintenance on couriers.

“Companies have been doing this for years — classifying workers as independent contractors to shirk their responsibilities,” said Aaron Spires, CUPW’s national union representative, at a press conference.

“It is our opinion that the law is fairly clear that these are not independent contractors, and we’re going to take that fight through the labour board if we need to.”

Though Foodora’s corporate workers are eligible for benefits, couriers are not. That’s a significant problem, they say, given the dangerous nature of their work.

“The pressure from the delivery companies to make sure they have quality, fast, reliable service is put onto the couriers, so they may cut corners or go too fast, on top of dangerous weather conditions,” said Ivan Ostos, a longtime Foodora courier. “We also have a culture in this city that demonizes vulnerable road users, and if you get doored or hit by a car, people might assume it’s just your fault.”

Ostos was involved in a crash last September while completing a delivery. “I didn’t know at the time, but my arm was broken,” he said. “I thought, I’m fine, but is the order okay? That’s a mentality a lot of couriers fall into — they blame themselves, or shrug off those injuries.”

The company’s first response, he said, was to ask if he could finish the job. “When they said I wouldn’t, they put the onus on me to coordinate with another courier to finish the delivery. They didn’t even tell that person I had been injured.”

After having surgery, Ostos pursued claim with the WSIB. “It’s convoluted. It takes a lot of time to get any money, and for the majority of people, it’s nowhere near enough to live off,” Ostos said, adding he received $210 a week after months of trying to secure compensation.

Foodora’s workers are paid $4.50 per order plus $1 per kilometre between the restaurant and delivery address — a rate that, according to the union, hasn’t gone up in three years. That doesn’t account for time spent getting to the restaurant, waiting for the food to be ready, traveling to peak delivery zones, or waiting for orders to come in, the couriers say. The end result is zero guaranteed income, and what they do receive varies wildly based on the day.

Ahmad Jarbou came to Canada as a refugee from Syria and started doing courier jobs when he had trouble finding work in electrical engineering. Unable to afford rent downtown, he spends three hours a day commuting with his bike from Pickering.

“Some days you’re fine and you make good money, but other days it’s very slow, and you wait for hours without orders,” he says. “That’s what made me join three food delivery companies at the same time — and that’s what many couriers are doing.”

The company has previously been the subject of labour movements around the world, pulling out of Australia entirely following a dispute over what a local union said was millions of dollars in back pay owed to its drivers.

Courier Alexander Kurth says he feels such a move is unlikely here, as Toronto is one of Foodora’s most profitable markets as well as the headquarters of their Canadian operations. Additionally, the Toronto couriers aren’t looking for retroactive pay: “We’re just seeking a better deal going forward,” he said.

UPDATE: Foodora has issued the following statement: “At Foodora, we care about the well-being of our riders, which is why we offer an inclusive WSIB (or provincial equivalent) package and have an open-door policy at our office in Toronto, where our team and fleet supervisor are always there to assist the contractors where we can. Internally, rider satisfaction is a top priority and we’re proud that the average earnings across the country last month were a competitive rate of $21/hour.

“We’ve been working on a project with our global team where we’ll regularly collect feedback from new and existing riders across Canada, with the goal of maintaining a high level of satisfaction. The initiative is scheduled to roll out later this month.”

A previous version of this story said Alexander Kurth no longer works for Foodora in fact, Kurth still works for them part time.