If the name of Black Hoof owner Jen Agg's new wine bar and restaurant conjures visions of a run-down mansion,. 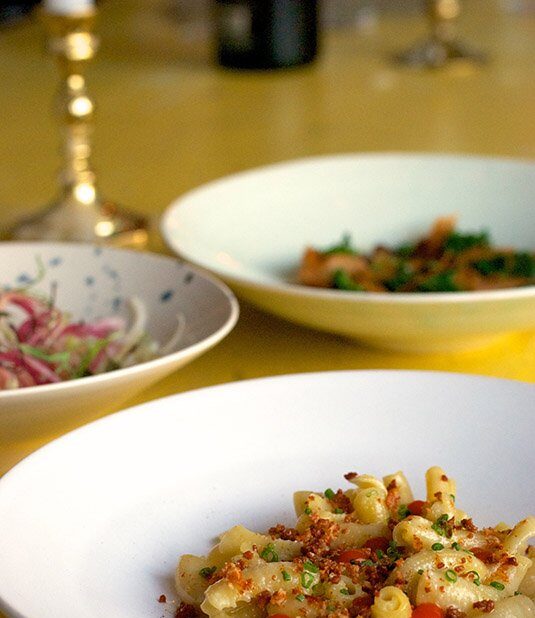 If the name of Black Hoof owner Jen Agg’s new wine bar and restaurant conjures visions of a run-down mansion, the Kensington version of Grey Gardens is anything but: After a year’s worth of renos, the former scooter shop at 199 Augusta has been overhauled into a serene, charming restaurant and wine bar.

Co-owner Mitchell Bates, formerly of Momofuku Ko, oversees the menu of mains and small plates. Dishes range from $12 (a dish of rutabaga, endive and cheddar) to $32 for a main of skate with black truffle. (Sure, that’s a splurge by Kensington standards but then again, they said that about La Palette too.)

Here’s a closer look at the space and menu:

The front room, which gets plenty of late-afternoon Kensington sunlight.

Stools line the open kitchen, where guests can watch Bates and co. at work (and marvel at their matching collection of Chiffon Pink Le Creuset cookware).

From the “small” menu: Meaty king oyster mushrooms topped with singed kale and lemon ($14). An earlier version of the dish was topped off with bonito flakes now, they use cured albacore tuna loin.

Sweet shrimp with radish and seaweed ($14).

Wines and ciders are the focus at the bar. The former selection, curated by GM and sommelier Jake Skakun, runs largely to European private-order bottles the latter includes some impressively funky Basque ciders, as well as French and North American options. (There are only two beers on tap: Bellwoods Brewery‘s Roman Candle, and, somewhat controversially, Coors Light.)

In the cozy basement party room, guests can sneak a peek at the wine cellar on the way to the washrooms (which, by the way, are adorable).

The restaurant is open Wednesday through Sunday and unlike the Black Hoof, Rhum Corner and Cocktail Bar, Grey Gardens takes reservations.