In her mouth-watering Instagram account, the improviser, writer and actor brings a feel-good philosophy to cooking and baking 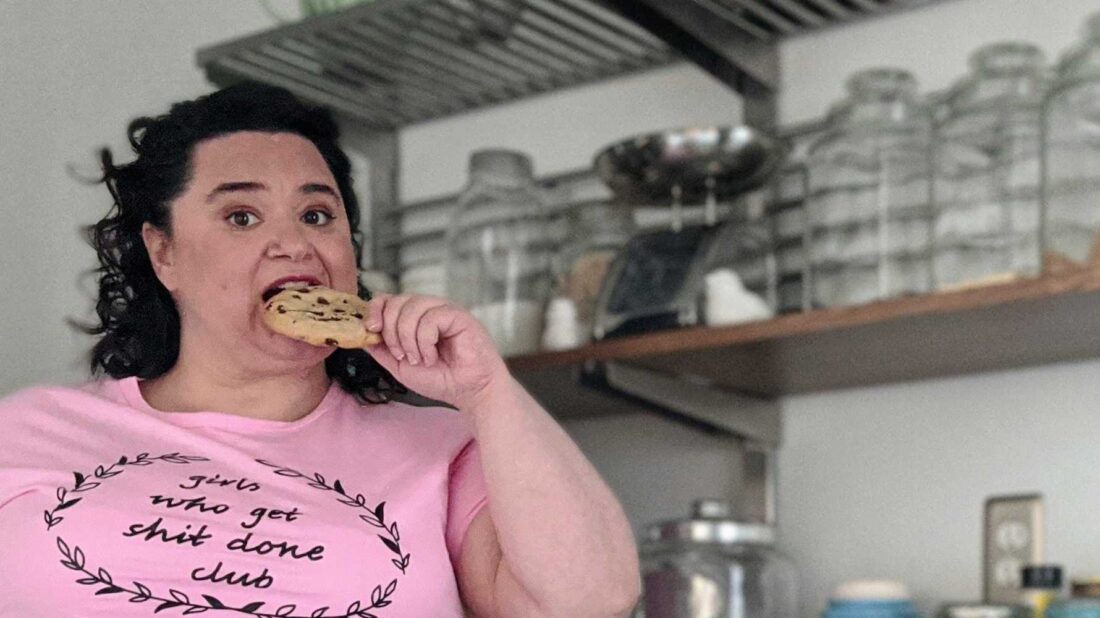 Actor and writer Jan Caruana offers up gorgeous food pics and wisdom every day on Instagram.

Improv and sketch comedy artist Jan Caruana is one of the funniest people in the country. With theatres closed during the pandemic, however, she’s been showing a different side of herself online. Every day on her Instagram account, @twolittlesandwiches, she offers up scrumptious pictures of food. Nothing new there. But what Caruana does is layer in little nuggets of philosophy, wisdom and inspiration in the accompanying text, making us think about food – and life – in a new way.

In one post, she’ll champion (champignon?) the modest mushroom (“Just because you have humble beginnings and you grew up in the dark, doesn’t mean you can’t shine now!”). In another, she’ll remind us that, regardless of how overwhelmed we might be by the world, in 30 minutes we can whip up vanilla pudding. Or she’ll explain how coconut cupcakes can give us a little vacation, tricking our minds into thinking we’re somewhere warm with the aroma of SPF.

Cooking is “good for the soul”

“Cooking and baking have been very good for my soul,” says Caruana, who calls her nearly two-year-old Instagram food account a “little corner of positivity.”

The Second City alum and current writer and performer on CBC Radio’s Because News says making food is meditative.

“I get in the kitchen, there’s a list to follow, you can only do one thing at a time and there are rules involved,” she says. “You can put on some music. It allows you to remove yourself from everything that’s going on in the world and focus on a single task.”

Caruana understands that some people get freaked out by the prospect of cooking and baking. They think whatever they’re making won’t turn out.

“But you really have to mess something up in order for it to be inedible,” she says. In fact, she admits that many of her own creations aren’t perfect. One of her cheesecake attempts turned out mealy, with a brown and cracked top and a sunken middle. Her solution was to cover the thing with whipped cream and strawberries.

“Because guess what?” she wrote in that particular post. “It wasn’t the best cake I ever made, but shared with someone I love, it was a pretty nice way to spend the night.”

That sort of philosophy infuses Caruana’s comedy; the best improvisers can save a faltering scene with the right attitude and some eleventh-hour ingenuity. Her approach to food is similar. Rather than ignore her fears, she faces them head on. Rather than be disappointed that almond flour isn’t all-purpose flour, she’ll embrace it for what it is. She feels similarly about a certain plant-based menu staple.

“You’re never going to bite into a portobello mushroom burger and think, ‘Oh my god, this is a hamburger!'” she says, laughing. “You might think, ‘This is a really delicious mushroom, it’s tasty and the texture is nice.’ But it won’t replace a hamburger and you can’t expect it to.”

Food as metaphor for life

As a writer, Caruana sees food as a great metaphor for everything that’s going on in your life.

“If you look at a recipe and it’s so long, with a huge list of ingredients, including some things you’ve never heard of, it’s easy to think you can’t do it,” she says. “But if you start breaking it down piece by piece, you realize you’re not cooking the whole thing all at once. Focus on each step.”

Caruana’s posts don’t exist in a vacuum. She’ll often acknowledge that people are feeling anxious, depressed or helpless. During the recent summer of activism over anti-Black racism, she found a way to address the need for permanent societal change… by focusing on lemon desserts.

“Food culture can often seem very frivolous,” she says. “My approach has always been, ‘Well, what do I want to say every day?’ Because I’m on there every day. The goal has always been to remain positive, and sometimes that’s difficult. If I can find a way to express complex feelings through something I’m familiar and comfortable with, maybe others can relate to it.”

With Thanksgiving around the corner, we’re all wondering if and how we can get together during the second wave of the pandemic. Caruana is used to hosting a big Thanksgiving dinner at her east-end apartment with her family. Does she have any advice?

“So if I were to give any advice, it would be: make sure you stay safe so everybody can stay healthy. I also think we need to reimagine what Thanksgiving is. We can’t be tied down to Thanksgiving being a turkey with stuffing, your mom’s apple pie, etc. We need to adapt. These holidays are more about being together and sharing a meal than they are about all the outer trappings. As long as we can stay safe, adaptable and patient with each other, I think that will make for a much happier holiday.”

Caruana also wants to point out that just because she posts mouth-watering pictures of food every day, it’s a very curated feed.

“You’re not seeing me microwaving hot dogs – although maybe one day you will,” she says. “Don’t hold yourself up to a standard. There’s Instagram and then there’s reality. I think all of us live somewhere in between.”