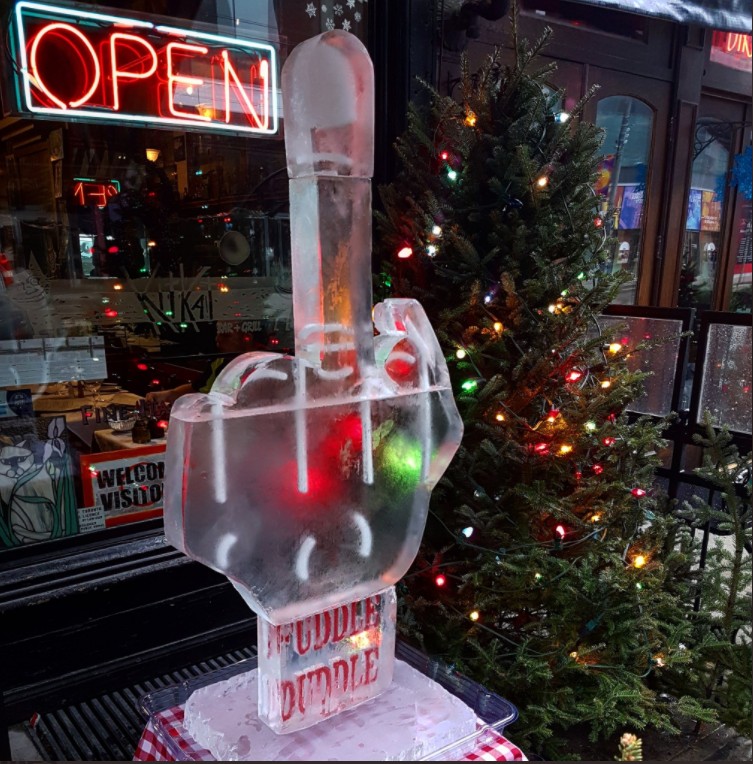 Kit Kat and The Office Pub – two restaurants that gave a middle finger to the King Street Transit Pilot – have closed.

Kit Kat Italian Bar & Grill infamously erected an ice sculpture in the shape of a middle finger to protest the initiative, which limited car traffic and parking on King West to smooth and speed up streetcar routes.

Owner Al Carbone was one of Toronto’s most vocal opponents of the pilot, claiming it was killing business on King West. He launched a number of publicity stunts to show his distaste. Carbone even ran for city council in 2018. (He lost, and the King pilot, which boosted TTC ridership and shortened commute times, became permanent.)

Now, after 31 years, Kit Kat has closed. Though the restaurant’s website still offers the possibility of reopening, Carbone confirmed to the Toronto Sun that the restaurant is permanently closed.

In a story that begins with the lead “They called him the King of King” (probably by the same people that were calling it C-Day), Carbone tells Joe Warmington the restaurant couldn’t survive the drop in business from the theatre and downtown office crowds.

Slightly north on John, the Office Pub has also locked its doors for good. Popular with the after-work and sports-watching crowds, the bar closed after nine years. In an Instagram post, the owner blames “an unfair lease expectation from our greedy landlord.”

“As a tenant for 9 years, we never ever failed to pay the due diligences on time,” the Office Pub writes in the post. “But during these difficult times, he has ignored our pleads to reduce rent, renegotiate a new lease, failed to apply rent subsidy from the government.”

The last point is referring to the Canada Emergency Commercial Rent Assistance program, which put the onus on landlords to apply. Many chose not to, keeping a pandemic lifeline out of reach for some commercial tenants.

“This week he has come and given us a legal notice asking to pay $156K from April to August,” the Instagram post continues.

NOW has reached out to Carbone and will update with any comment.

The Office Pub also put up a middle-finger ice sculpture during the King Street pilot, though its connection to Kit Kat was not public at the time.

In the end, the pilot didn’t kill either restaurant, but COVID-19 did.