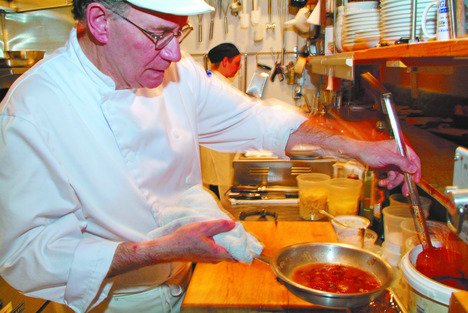 While big-bucks dining rooms have deservedly gone the way of the fax machine, small chef-driven neighbourhood bistros – laid-back boites like Delux on Ossington, Batifole on Gerrard and Weezie’s on King East – continue to thrive all over town.

But until Leopold opened late last month, the bistro phenom had yet to hit St. Clair. Sure, the densely populated strip from Bathurst west to Lansdowne is home to countless Italian trats and Latin cantinas, and you can get a creditable croissant at Pain Perdu and Patachou. But coq au vin and an affordable bottle of plonk? Forget it.

Leopold comes with quite the pedigree. Owner Carlos de Loddere and chef Claude Boulliet first worked together at Le Bistingo on Queen West back in the 80s. There, they served nouvelle cuisine to the slumming Rosedale set, Loddere fronting the house, Bouillet in charge of the kitchen brigade. Bouillet also did time at Provence, Pastis and Quartier.

But those expecting a similar scene of air-kissing and expense-account schmooze are bound to be disappointed by Leopold – the casual 44-seat storefront bills itself as a “resto du people.”

“Everybody can afford to eat here,” says Loddere.

Leopold also doesn’t look much like a typical French resto. Tables are linen-free, the banquette semi-upholstered, and menus posted on chalkboards get hung on stark white brick walls. On the CD player, Sade wonders what happened to that Smooth Operator before shuffling into Astrud Gilberto’s Girl From Ipanema. A few well-placed space heaters offer relief from the Arctic blast that chills the room every time the front door opens.

A round of Belgian beers (Leffe Brune, $5.75) and the first basket of Ace baguette in place, we start with “poelle of escargots sauce luma’ ($10).” What translates as “snails in snail sauce” turns out to be six exquisitely seared slugs in a rich, garlicky sauce thick with shallots, parsley and bread crumbs. More, please!

Though listed as an appetizer, moules mariniere ($11) could easily be a main, its two dozen or so mussels in an addictive garlic sauce soon soaked up by bread. And we’ll need more for chef Bouillet’s terrifically rustic chicken liver terrine ($8.50 with organic mesclun in a walnut oil vinaigrette), if only to help polish off the large Mason jar of lightly pickled cornichons that comes with it. We are supposed to eat all of them, right?

“Not really, but you can if you’d like,” says our unflappable server, his eyes rolling to the exposed ductwork overhead.

He soon returns with our mains. A Diana Ross-worthy supreme of roasted chicken breast sports perfectly crisped skin and a fabulously lemony mushroom-tarragon jus, but the advertised “Ontario pork chop” (both $16.50) is revealed as a cheap, tough shoulder blade once its overabundance of balsamic-caramelized onion topping has been scraped aside.

Shame the chunky fries that accompany chef’s otherwise exemplary steak frites ($17.50) are as undercooked as a two-minute egg, though his thin pink-centred bavette is perfectly grilled a point.

Four mains, three starters, two baskets of bread and a jar of pickles later, we’re too stuffed for dessert. Next time – and we see a lot of “next times” in Leopold’s future – we’ll split the mussels and save room for the textbook lemon tart ($9.50).