What to eat in Portland, Maine

How to sample your way through the U.S.'s top restaurant city of 2018 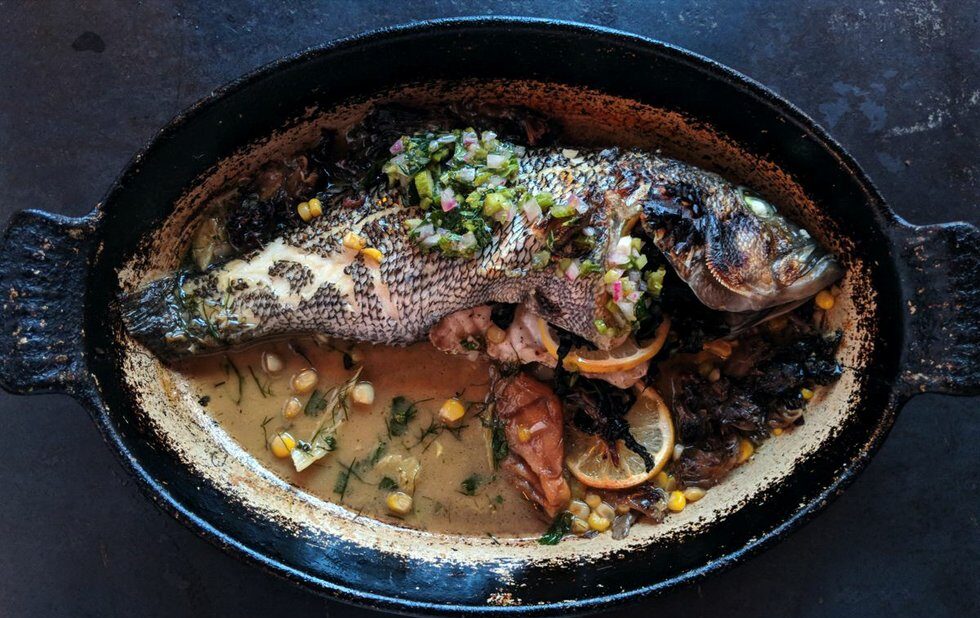 Earlier this year, Bon Appetit magazine named Portland, Maine, its restaurant city of 2018, and eyebrows across the continent were ever-so-slightly raised.

Up until then, Maine’s most populous city (population: 67,000) generally flew under the radar as a food town, despite an already-booming tourism business bolstered by ships visiting the city’s port. But the city’s latest burst of recognition on a national and global scale is entirely deserved, with a diverse and thriving base of local eateries that make the other Portland a lively food destination that’s full of surprises.

You, skeptical Torontonian, may be thinking, “Okay, but Portland’s got 2 per cent of our population — what can they possibly have that we don’t?” But if you make the trek (about a three-hour flight time or a two-hour drive from Boston), there’s plenty of eye-opening eats to discover. Here’s what you should make sure to zero in on while you’re in town. 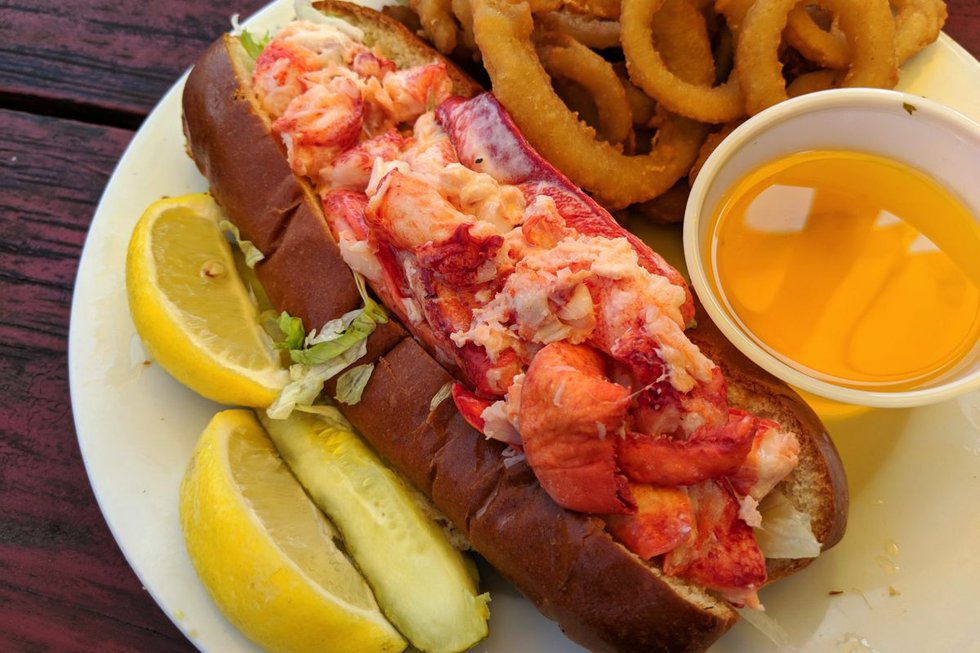 Lobster rolls at the Porthole.

We’re pretty well-served by top-flight seafood importers — but nothing beats crab, lobster and oysters just dredged out of the local bay that morning. Even the most touristy of Portland’s waterside joints will serve you the super-fresh stuff, because why wouldn’t they?

Once you land in Portland, you’ll likely be tempted (understandably) to make a beeline for the closest crustacean on a bun — but not all lobster rolls are created equal. Prices are dictated by the day’s market value, and seem to be fairly consistent from place to place (during my visit in August, a lobster roll would set you back about $20 US) — but serving sizes can differ dramatically.

A safe bet is the Porthole, which could coast on its tourist-friendly proximity to the harbour, but instead serves up some decent bang for your buck in forms of impressively beefy lobster rolls. (NB: You can get them served with your choice of melted butter or mayo, to satisfy the two local camps of lobster roll condiment application.) Some locals, meanwhile, swear by the High Roller, which also goes heavy on the lobster meat — only their rolls feature a housemade jalapeno aioli. 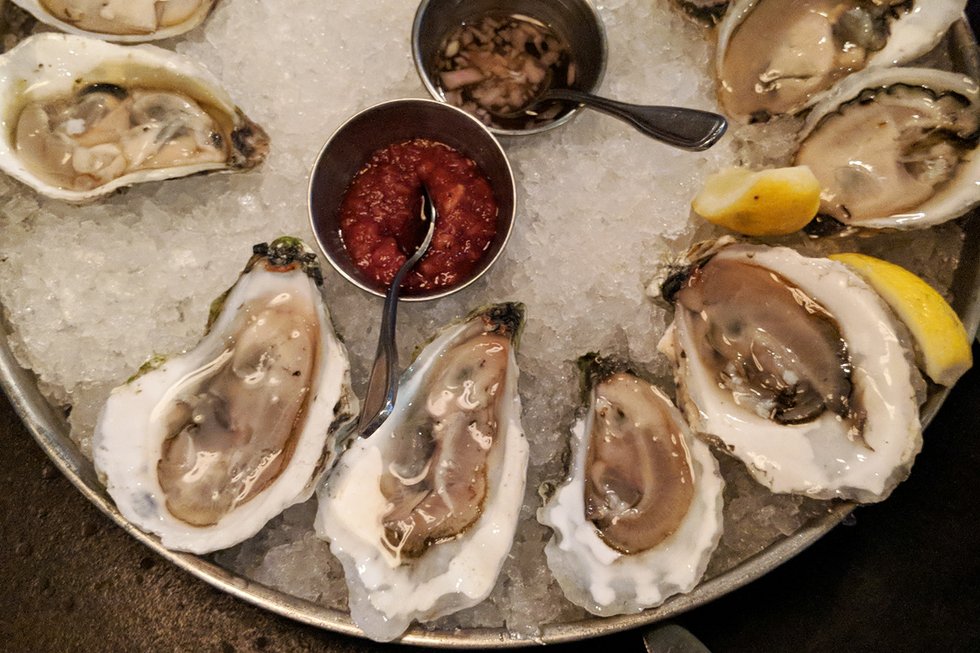 But not all of Portland’s seafood offerings are best enjoyed in Tevas and cargo shorts. Fore Street, widely regarded as one of the city’s best fine-dining establishments, offers Maine lobster with chanterelles and whole black sea bass (among other locally-sourced, omnivorous delights) done over apple and hardwood fires that perfume the air within the dim, cozy space.

And Scales, with its industrial-chic setting boasting massive windows letting in the hustle and bustle of the harbour, is exactly how you’d imagine an upmarket restaurant in a seaside town (well, except for the chute dropping ice for the raw bar from the ceiling. The seafood-heavy slate of dishes includes silky Maine scallop carpaccio with caviar and finger lime, Casco Bay lobster chowder, and a rotating raw bar selection of oysters and littleneck clams. (For more oyster action, wait out the inevitable line at Eventide, where over a dozen types of Maine oysters — plus a sprinkling of “away” specimens — await.) 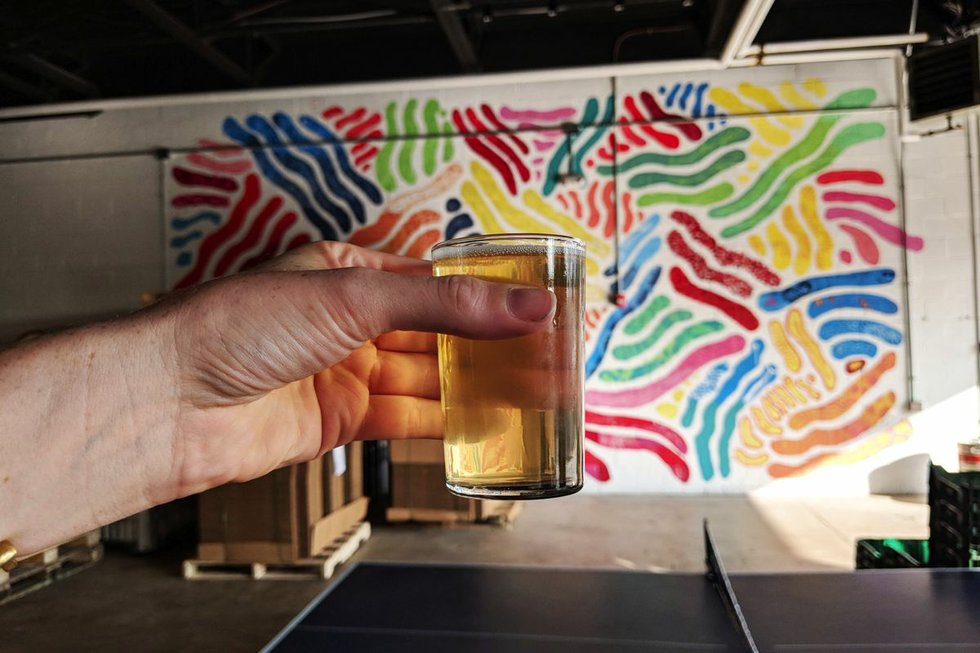 The biggest export of Portland’s thriving beer scene may be Allagash Brewing Company, which has made a name on a slate of bottle-conditioned beers (the best known of which is their Witbier). They offer both free and in-depth tours, but be sure to check out some under-the-radar outfits. My pick is Bunker Brewing, a mural-splashed industrial spot that feels like a little slice of Bushwick, which specializes in risk-taking brews like a citrusy lager made with littleneck clams (it’s surprisingly not at all fishy) or the 9.5 per cent Trashmaster, a raisiny imperial stout. Knock out a few brewery visits in quick succession with The Maine Brew Bus. 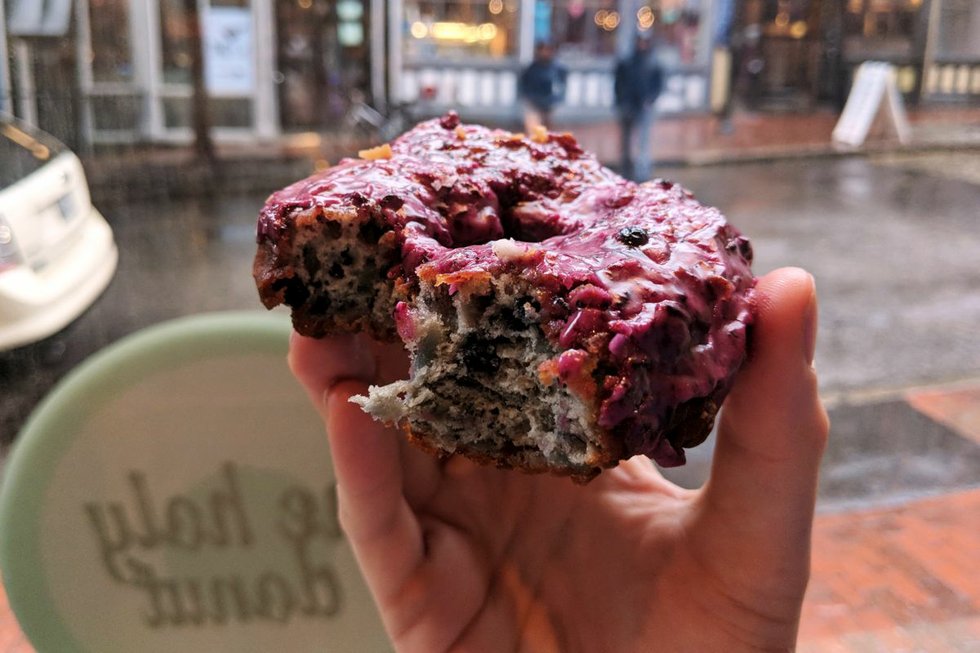 Fun Maine fact: The potato is the state’s primary agricultural product. What are Mainers gonna do with all the ‘taters that don’t end up in chip bags, fry sleeves or lobster boils? Turns out, they make ’em into sweets.

Of particular note is the potato donut, which tourists gamely queue up to sample at The Holy Donut’s downtown location. The bakery offers a couple dozen rotating flavours of the surprisingly spongy, moist treats: dark chocolate sea salt is the year-round bestseller, but if you visit during blueberry season, it’s worth it to combine two of Maine’s biggest crops into one with their blueberry version.

For a less-squishable snack to bring home to pals, consider the Needham, a regional snack akin to a chocolate macaroon, which features an undetectable dose of sweetened spuds. 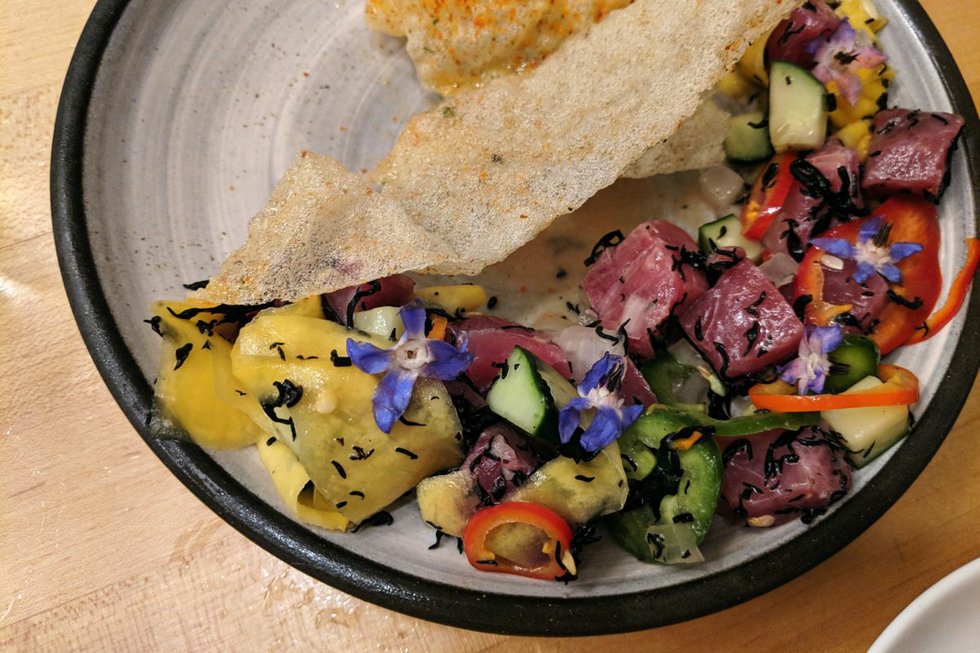 Way before they got that fateful Bon App shout-out, Cong Tu Bot was a cult fave with Portland locals for punchy, bold Vietnamese eats (their Instagram is worth following even if you don’t live there). Same goes for Ten Ten Pié, a bakery and lunch spot that gleefully jumbles together Japanese and European influences, putting out babka and banh mi alongside pork bun bento boxes and some righteous (and very midday-snack-friendly) savoury hand pies.

And though there’s nothing even remotely in the same solar system as “authentic” about the menu at Eventide spinoff The Honey Paw, which puts smoked lamb khao soi next to crab mee goreng next to mapo tofu, everything you’ll try is absolutely mouthwatering. 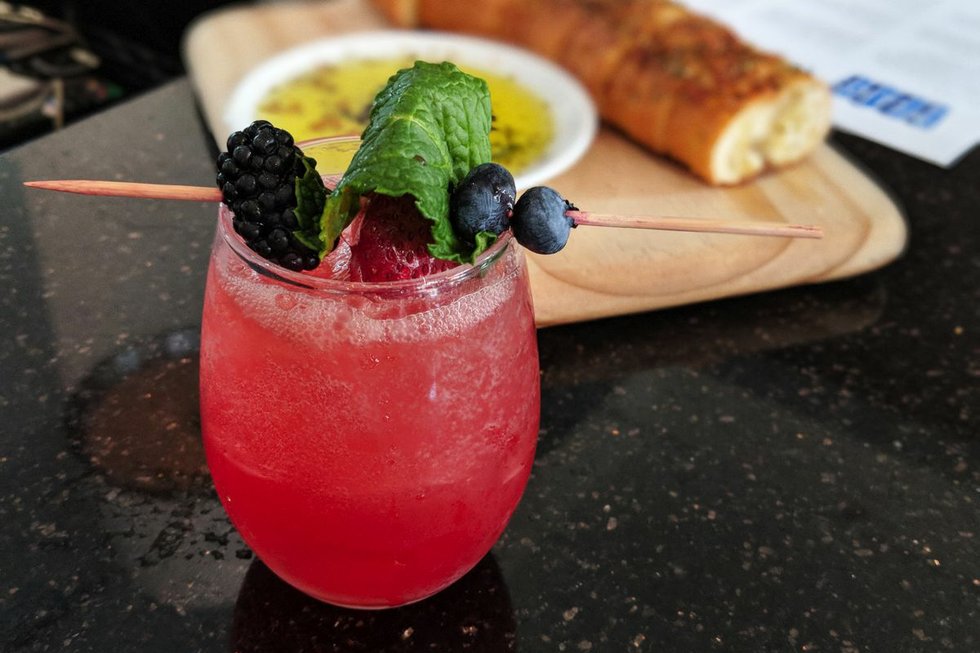 Cocktails at Glass at the Hyatt Place.

While you’re there, here’s where to:

Stay: Sure, there are more boutique-y options in the compact city centre, but the Hyatt Place Portland is a conveniently-located option that boasts some seriously stunning harbour views and impressive green initiatives. (A quarter of their power consumption comes from solar panels on the roof, and the motion of the building’s elevators actually acts as a generator for the rest of the hotel.) Staff are helpful, and the cocktail program at lobby bar Glass, helmed by prize-winning bartender Mike Wescott, is a solid spot for a nightcap try the Bee’s Sneeze, a take on a classic with Oaxacan honey, lavender bitters, Barr’s Hill gin and cinnamon-infused ice.

Shop for vintage: If you’re around on the weekends, be sure to visit Portland Flea-For-All, at 10,000-square-foot market with more than 50 vendors offering clothing, housewares, antiques and more. Or hit up Little Ghost, a tiny shop nestled into the side of a historic office tower, for some very reasonably-priced finds for men and women (check out their Etsy for a teaser).

Hunt for records: Strange Maine is the kind of weirdo outsider record store you expect to find in every U.S. college town — in short, it’s the perfect place for to go digging for rare LPs and B-movie horror tapes. For a slightly more curated experience, Moody Lords is a sunlit shop that splits its space between used records and some choice vintage clothing pieces.

Pick up souvenirs: The name might evoke a children’s clothing store (or maybe a supply spot for birding enthusiasts), but Pinecone+Chickadee is actually a whimsical gift shop selling everything from cartoony silkscreened tees to greeting cards and vintage suitcases (all the better to stash your new purchases in). For something a little more unusual, check out The Merchant Co., a consignment-style gift shop (think Portland’s answer to Arts Market). Where else are you gonna find a Dolly Parton prayer candle right next to a velvet painting of No Face from Spirited Away?

Disclaimer: The writer travelled as a guest of Hyatt Place Portland. All opinions are her own.