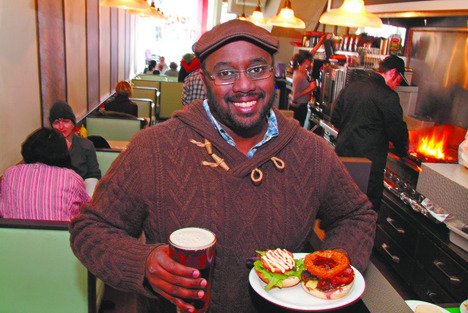 Bo Diddley was right. You really can’t judge a book by looking at the cover.

Case in point: BQM Diner, the offshoot of the Burger Shoppe that’s just opened in the legendary Stem at Queen and Spadina. Before stepping into the joint, I figure I’m going to hate everything about it. For starters, there’s the once-iconic neon sign out front, now painted over with a shudder-inducing logo for Pabst Blue Ribbon, the official tipple of the trucker-hatted hipster set.

Plus, I’d never been a fan of the Burger Shoppe, having found the Riverside take-away’s operation amateurish, its product poorly executed, overpriced and under-garnished. And how dare anyone desecrate a Toronto landmark like the Stem, the no-frills spoon that had served the downtown crowd since the early 50s? Is nothing sacred?

But one bite into BQM’s honorary Stem Burger ($8.95) and I’m ready to eat my words. Whereas previously, BS’s burger was scrawny, of no particular provenance and overcooked to the point of resembling a hockey puck, the considerably improved BQM patty is now a generous 6 ounces of Rowe Farms organic ground beef. 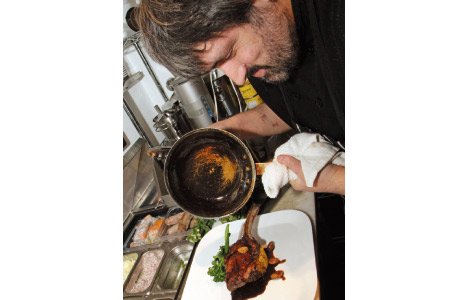 Halfway through the burger, I begin to notice the narrow room itself. Although it’s been completely gutted, the new Diner’s design takes its cues from the old, a row of retro vinyl-upholstered booths down one long wall, a new industrial bar with stools facing an open kitchen down the other. A time-capsule soundtrack shifts from the 87 Pixies to the 68 Velvets. A Handsome Ned or Demics CD would not be amiss.

Burger Shoppe’s onion rings used to be proudly frozen and straight from a box labelled McCain’s, but BQM’s are the real deal, large slices of Spanish onion dipped in beer-battered panko crumbs and deep-fried to perfection ($4.95).

Skin-on fries ($3.95) also arrive nicely crisped. Throw on some mozzarella and a whack of shredded pulled pork in a too-sweet barbecue sauce in need of a shot of vinegar and you get one of the tastiest poutines in town ($7.95).

Don’t eat meat? Then start with a fabulously rich roasted carrot soup ($3.95) spiked with maple syrup before polishing off one of Miss Joy’s Tofu Burgers, a massive block of dense bean curd deep-fried in eggy batter and dressed with organic greens, balsamic-glazed beets and crumbly goat cheese ($8.95). But steer clear of the Meatless Burger ($7.95), a “grain and legume patty” that might be likened to a mushy mash of Indo-spiced spuds and chickpea channa. Messy, too.

But whatever you do, don’t come to BQM expecting the Stem of $2.25 cornflakes and $1.10 cinnamon toast. Long gone are the days of $4.45 three-egg breakfasts, now replaced with two-eggs-any-style (except poached) sided with three rashers of regulation bacon and a stack of Texas-style whole wheat toast ($8.95), a cup of strongly brewed Te Aro coffee another two bucks.

“I’m well aware of the Stem’s place in history, and I’m trying to stay as true to the original as I can,” says Diner owner Saeed Mohamed. “We’ve even brought back rice pudding.”

All very well, but where’s the red and green Jello?