Rosalinda (133 Richmond West, at York, 416-907-0650, rosalindarestaurant.com) is a vegan Mexican restaurant from the people behind El Rey and. 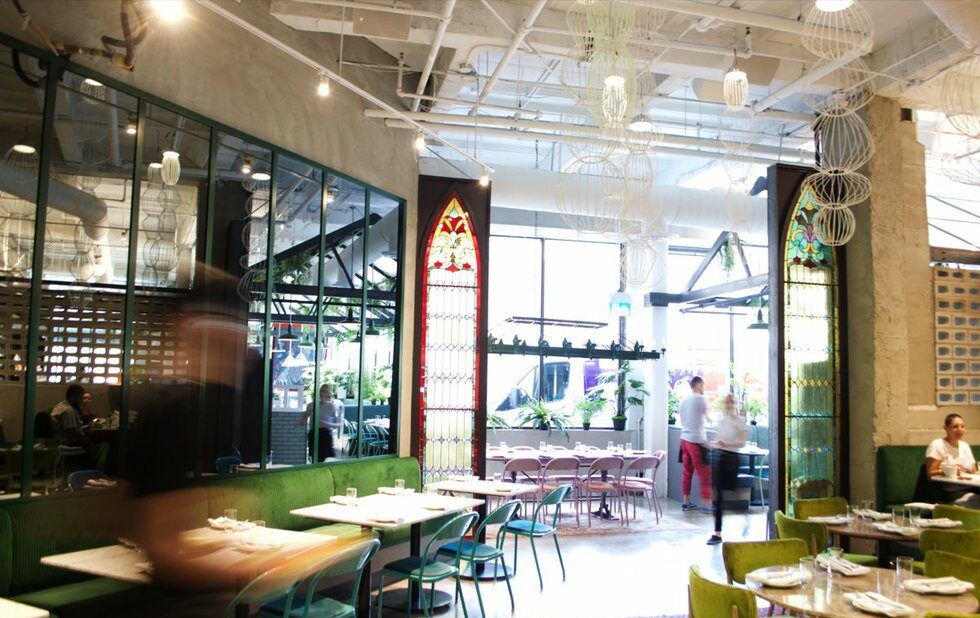 Rosalinda (133 Richmond West, at York, 416-907-0650, rosalindarestaurant.com) is a vegan Mexican restaurant from the people behind El Rey and Pizzeria Libretto.

The 136-seat restaurant, a striking space decked out with tons of greenery and a greenhouse-style roof, was a full 10 years in the making: Max Rimaldi and Jaime Cook, who founded Libretto, started talking about a plant-oriented dining concept in 2004.

Our wives are both vegan, Cook explains. We were always disappointed that theyd be stuck with the pasta option, or salad or something. Now, I think theres a lot of great (vegan) places in the city, but there wasnt (when we started planning Rosalinda). Service would be lacking, or the menu would be out of half the items.

They brought Grant van Gameren (of Bar Raval and Bar Isabel) on board, and the three went to California to gather ideas. In turn, van Gameren recruited Kate Chomyshyn and Julio Guajardo, whom he worked with to create the Mexican menus at El Rey and the forthcoming Quetzal, and Rosalindas menu went from California to Baja California pretty quickly.

Theres a lot in that area thats similar to Californian food, but obviously, with a lot of Mexican flavour, Guajardo says.

Theyre all kind of riffed on, though, to make it vegan, Chomyshyn adds. Like, traditionally, the moles would be cooked with a lot of pork lard.

Chomyshyn and Guajardo called up their vegan friends and asked them about their dining pet peeves. They were all like, Theres nutritional yeast on everything. Theres nuts in everything. They think every dish needs to have a protein. Everyones trying to find that meat flavour, instead of just letting you taste the vegetables, Guajardo says.

In the kitchen, the focus is on what chef de cuisine Matthew Ravenscroft calls the power of vegetables.

Theres so much flavour and depth, he says. With proper technique, you can create a lot of really interesting combinations that are very unexpected, but you dont really have to manipulate the vegetables too much. We want people to see that vegetables are something to really be enjoyed and showcased, not cast to the side of the plate.

The result is a menu of small, simple vegetarian plates, as well as tostadas and tacos topped with grilled nopal (prickly pear cactus), roasted cauliflower and cochinita pibil-style jackfruit. Regional Mexican elements like sikil pak (a Mayan pumpkin seed dip) and salsa macha (a spicy, peanutty sauce from Veracruz) are peppered throughout.

On the drinks side, Owen Walker (of Bar Isabel, El Rey and Quetzal) created a cocktail menu designed for a downtown audience: speedy to produce, with plenty of low-to-no ABV options, in case you want to have one and keep your wits about you back at the office. Cook says they were also keeping the sober crowd in mind. Ive got a friend who doesnt drink. He was on a first date at a nice hotel, and they gave him a cup of apple juice with a straw floating in it. Hes like, Do you have any idea how that looks on a first date?

So far, the downtown crowd vegans and meat lovers alike has embraced Rosalinda with open arms. The big carnivores are hesitant to try it, but theyre surprised by how full they feel, and how great they feel, Cook says. They dont even miss the meat.

Rosalindas take on ceviche ($14) is built around sizeable slivers of young coconut with celery, apple and pickled shallot. Traditionally, Ravenscroft says, youre supposed to pick up your bowl and drink the leftover marinade (also called leche de tigre, or tigers milk) after youre done.

The partners suggested a veggie burger be part of the menu though Guajardo and Chomyshyn were originally skeptical, they experimented with recipes, buns and binding agents until they came up with the Rosaburger ($18). The black-bean burger comes topped with smoked eggplant, avocado salsa and chipotle mayo on a classic squishy burger bun. You can add vegan mozzarella Pizzeria Librettos own recipe for $2.

The roasted Japanese eggplant ($16) is served on a bed of salsa macha and sikil pak and topped with cashew crema and a smattering of pomegranate seeds.

Jicama and citrus salad ($14) features cubes of the root veggie on a bed of avocado-pistachio crema.

The kitchen kicks out 400 spiced churros (served with cinnamon sugar and chocolate banana caramel, $8) per day. A lot of the classic recipes are straight-up flour and fat. We use coconut oil, and it really works, Chomyshyn says.