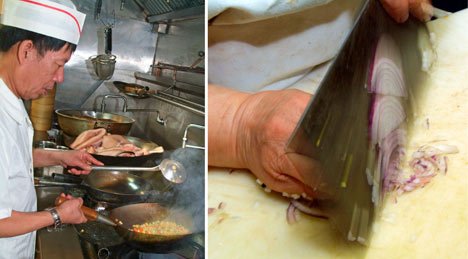 Like just about everything these days, food is all about extremes. Enviro-conscious vegans push the boundaries of vegetarianism in the name of saving the planet and their livers at the same time, and flesh-crazed carnivores go hog wild for charcuterie, the more obscure the body part the better.

Why, just look at the foodies in full feeding frenzy over suckling pig Eggs Benny and foie gras French toast every morning at the Hoof Café. Yet even they might draw the line at Speedy Fried Pork Intestine ($7.99) and Mixed Lamb Entrails in Soup ($6.99), just two of the more than 150 northern Chinese specialties on offer at the intriguingly named Ten Mile Aroma.

I consider myself an adventurous eater. I’ve survived Mr. Pong’s giant egg roll, the service at Helen’s Hash House and the Sunday brunch buffet at Captain John’s. But much of Aroma’s meat-centric carte challenges even me. Then again, so does my mother’s tuna noodle casserole.

Amply packed with shredded leek and a soupçon of scrambled egg, pan-fried Leek Pockets (#11, $4.50 for two) could be distant cousins of the Cornish pasty and Jamaican patty.

Bite-sized steamed Tianjin-style buns (#16, $3.50 for six) give way to juicy anise-kissed sausage centres. And we’d describe “fried dough wrapped in green bean cake (#6, $3.50) as cracker-thin pizza crust spread with hoisin and Sriracha and wrapped in a tissue-thin veggie crepe if it were up to us. Delicious stuff, too.

Pork belly might be all the rage at trendy trats like Local Kitchen and Foxley, but not when served cold and heaped with garlic (#66) à la Ten Mile.

Be assured that no endangered species were harmed in the preparation of Special Tiger Vegetables (#69, all $4.50), a wilted coriander and peanut salad in fiery soy dressing that goes particularly well with skinny fried rice noodles tossed with shredded chicken and soy bean sprouts (#52, $5.99).

Though meats abound, vegetables – other than spuds and carrots – are few and far between. Potato Threads (#92, $4.99) turn out to be a barely cooked julienne doused with red chilies, Spicy Tofu (#97, $5.99) a straightforward bean curd stir-fry (albeit one loaded with chili pods), and fried long green beans with ground pork (#93, $6.99) a salty Shanghai take on the Cantonese classic.

Until we’re in the mood for over-cooked roadkill, we’ll pass on House Special Crispy Chicken – a scrawny deep-fried, randomly hacked and flattened bones-and-all bird (#124, $9.99) – until we’re next in the mood for seagull carcass.

But the next time I need to feed a party of eight for under two bucks a head, I’ll be back for a massive platter of Stewed Chicken with Vegetables (#126, $15.99), an aromatic braise of chopped-up thigh, potatoes and carrot slow-cooked in cumin and caraway and thick with raw green chilies over a veritable knoll of long, long lasagna noodles big enough to fuel a rebellion.

Throw in several cans of Sundraft lager – $1.75 each and the sixth one’s free! – and I might even pick up the tab.