From Michelin-approved to matcha-infused, these are some of the hottest bowls in town 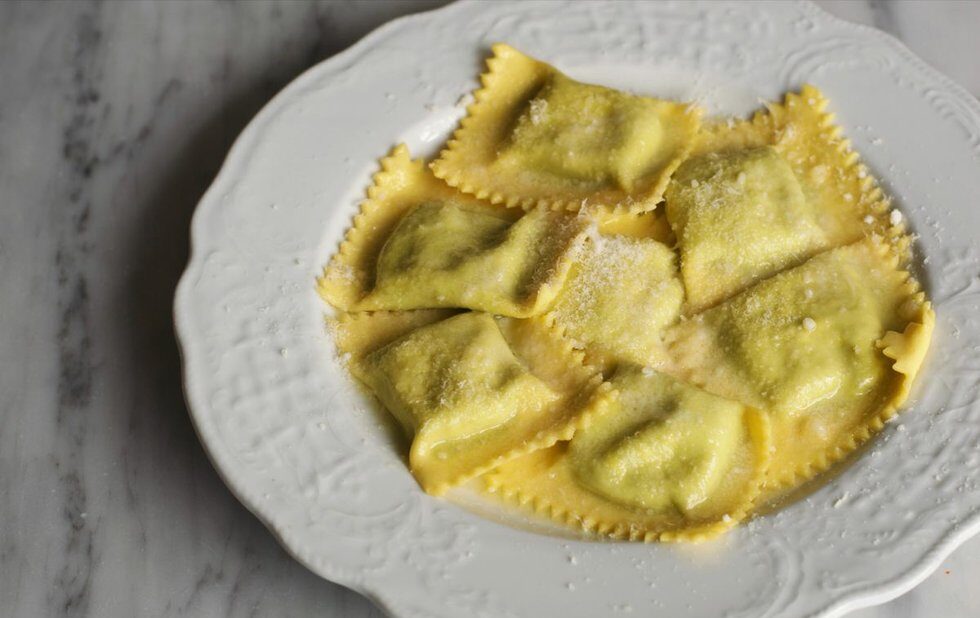 How to stand out in a ram-packed ramen marketplace? A nod (or five) from the Michelin guide doesn’t hurt. Misoya, which landed on Queen West this spring, has 100 locations in Japan, plus offshoots in Bangkok, Montreal and New York – the latter has been honoured by the food guide for five years running. The cornerstone of the menu is (you guessed it) miso, which forms the backbone of Misoya’s two main ramen styles: Gold kome, a punchier, richer miso from Hokkaido, and silver shiro, a sweeter, milder style from Kyoto ($12 and up). There’s also the sleeper hit: A rich, peppery tan tan ramen, which gets a sunny hue from sesame and chili ($15.50). Whatever your order, a few things are constant: Thick, wiggly noodles, plus grilled-to-order chashu, seasoned eggs and pan-fried ground pork, all seasoned with miso. Want more heat? Spicy red miso is optional! Far from one-note, it’s a formula that turns each dish into a killer umami bomb.

Misoya’s not the only bowl of ramen in town to catch Michelin’s eye: North York’s Konjiki is the first-ever international offshoot of an eight-seat Tokyo ramen shop that’s managed to earn the title of Japan’s best ramen, as well as official Bib Gourmand certification (Michelin’s cheap-eats rankings, for the uninitiated). At the Yonge shop, which dwarfs the original at 2,300 square feet, diners can revel in chef Atsushi Yamamoto’s signature clam broth ramen ($14 available in shio or shoyu versions and dressed with porcini mushroom and truffle). Save your visit for a Wednesday, and you can spring for the weekly special: a lobster ramen topped with claw meat and a lobster cream reduction ($28). Dessert at next-door chain Saryo is mandatory. 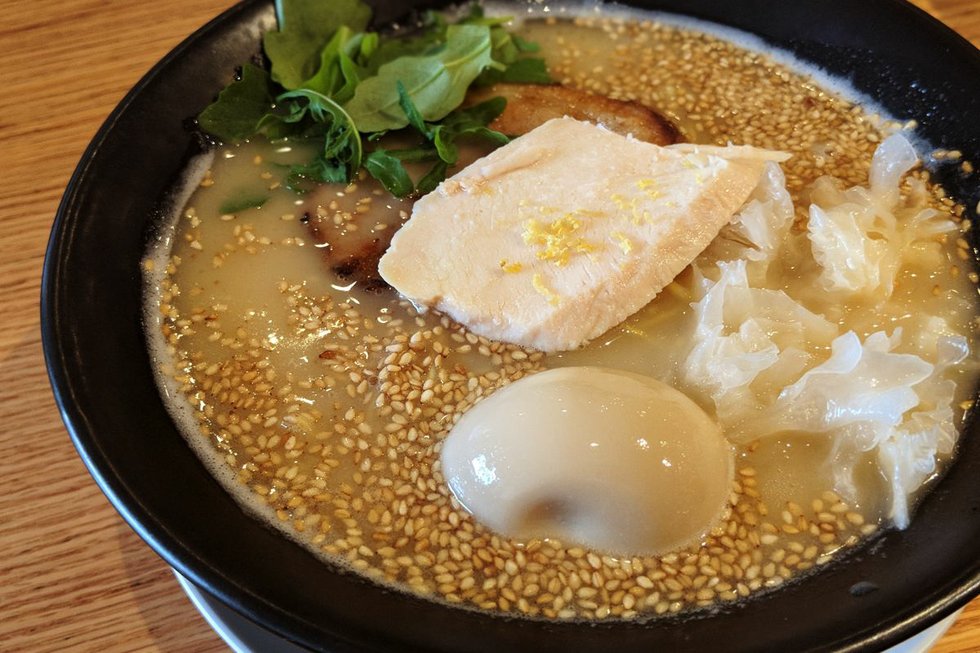 Shoyu ramen (plus egg) at Ryus.

Ryus has been hawking noodles for five years, moving to Broadview a year ago after a fire shuttered the original location in Baldwin Village. (The plan was originally to reopen Baldwin ASAP, but it’s since been put on hold.) But Ryuichiro Takahashi’s ramen joint is flourishing in what was, until now, a cursed location. In fact, the chef was invited to set up a satellite location in the Shin-Yokohama Ramen Museum in Japan, an honour that’s led to a barrage of new interest in the shop. If you’d like to brave the lines, be sure to try the bowl that won the hearts of the Yokohama judges: a shio ramen ($13.80) made with Ontario chickens. 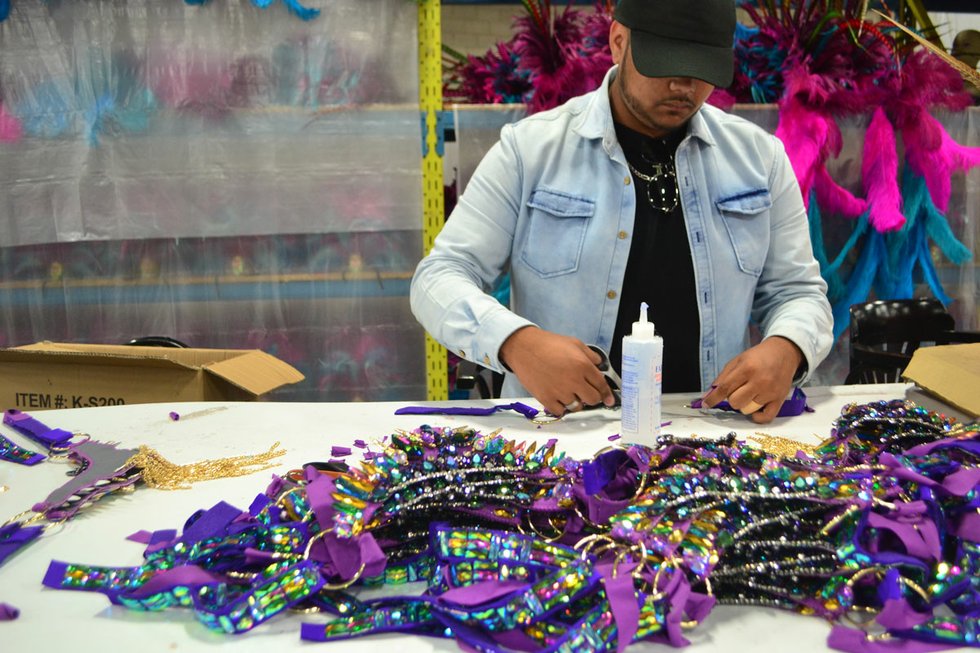 The “curse” of 596 College claimed AF1 Caribbean Canteen earlier this year, but new arrival Tondou Ramen just might be the lucky business that breaks the cycle. The Okinawan chain offers half a dozen styles, including a take on tonkotsu ($9 for a small, $13.50 for a regular) that gives my gold standard, Santouka, a run for its money – velvety and rich, flecked with oil bubbles and little floes of pork fat, with skinny noodles and a surprisingly sweet ginger-laced chashu pork. Tableside toppings include black and white pepper, a sesame seed grinder and a complimentary jar of spicy sesame bean sprouts that you’ll probably want to just eat straight-up. (I sure did.) Large and small bowls are offered, a welcome option for those who want to delve into the app menu of gyoza ($4.50), nanban fried chicken ($6) and super-smoky aburi pork belly on rice ($6). 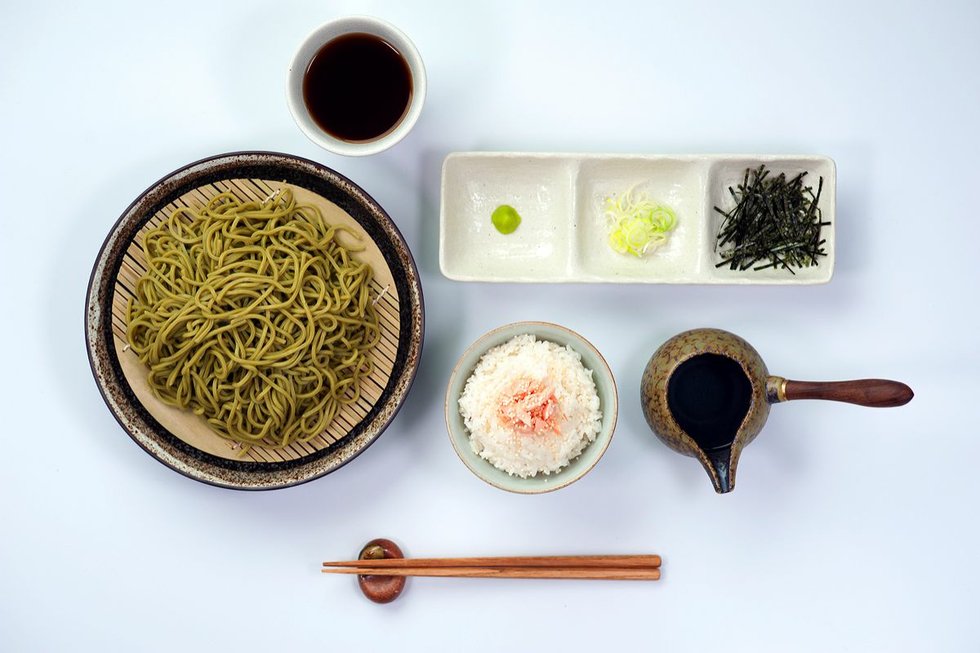 The zaru soba at Tsujiri.

The Uji-based franchise might be synonymous with all manner of matcha desserts (cheesecake, soft serve, pancakes, shaved ice, you name it), but across the Pacific, it’s also known for savoury dishes. Earlier this year, when the company expanded its North York location to include a second-floor dining room, it also rolled out dishes featuring spring-green soba noodles, imported from Japan, laced with the brand’s signature matcha powder. Technically, wheat-based noodles are separate from buckwheat-based soba, but the preparation of the “tsuke soba” dishes borrows directly from dip-and-eat tsukemen-style ramen, pairing the gently nutty, toasty noodles with bowls of creamy pork broth or a buttery sweet corn version (both $12.50). 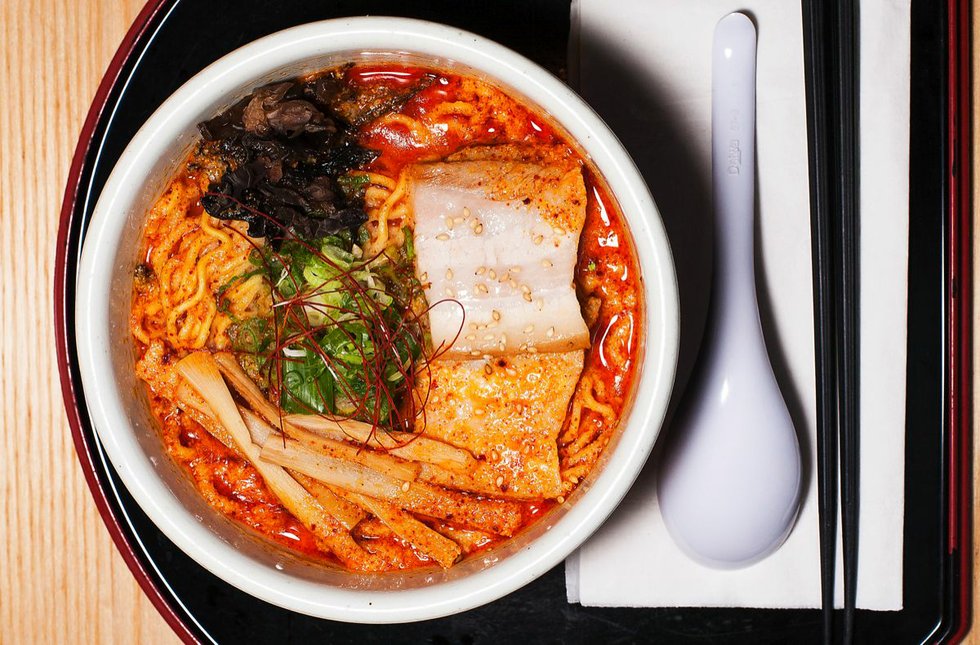 The kara miso ramen at Santouka.

Some swear by Kinton or Kenzo, but this Hokkaido-based ramen chain (aka Hokkaido Ramen Santouka) forever occupies the number-one place in my heart. Apparently I’m not the only one, since the doorway at the original Dundas location is perpetually crammed with devotees jonesing for a hot bowl of tonkotsu. Mercifully, for its second location on Bloor, they went a little bigger, with bar seating that stretches parallel to the long kitchen (because as any Santouka fan knows, half the fun is watching them scoop, dunk and shake your noodles to order). North-end ramen heads, take note: a location at 2057 Yonge is set to launch this fall.

Snoozy Cabbagetown has long been one of the city’s best under-the-radar destinations for top-flight izakayas and sushi (hello, Zakkushi, Kibo and Kingyo) – but the strip was fairly dry of pork broth until now. In a cozy downstairs space previously occupied by cult favourite Caribbean spot Under the Table, new arrival Tokyo Ramen is dishing out a fairly stripped-back menu that includes six types of soup, from tonkotsu and miso to shoyu and shio, plus all your favourite fried sides (takoyaki, karaage, agedashi tofu and gyoza). Bonus: UberEats delivery, in case you’re not in the ’hood.