Cheap, splurge, AYCE or omakase — these sushi spots have what you're craving 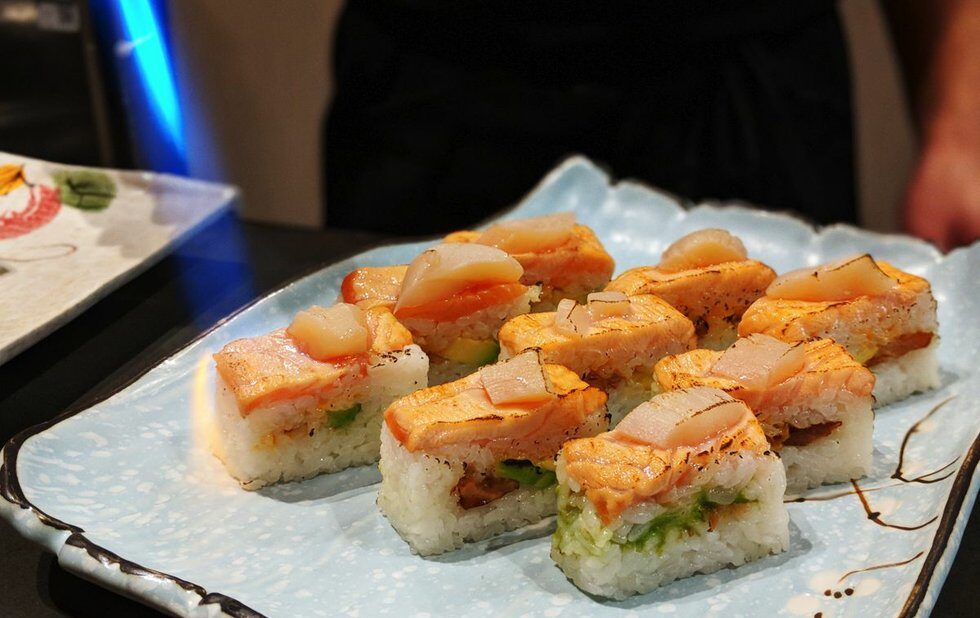 Kaka All You Can Eat

Penny-pinchers love all-you-can-eat sushi – so the intense popularity of this Markham AYCE joint, despite its higher-than-average price tag ($30.99-$33.99), should tell you something. Kaka was among the first affordable spots to popularize torched aburi sushi, and their seared, sauced nigiri are indeed top-notch – but the cocktails, hot items and desserts like lychee pudding and green tea crème brûlée are winners, too. The chain opens its first downtown location in early March – expect lineups.

Picture the archetypal sushi restaurant: Paper screens, dim lighting, and soothing strings, right? This isn’t that. Instead, Fushimi is a loud, colourful pre-party pit stop in the Village with loud, colourful food: Boom maki with lobster tempura, Out Of Control rolls crusted with pulverized spicy salmon, pepper-crusted tatakis, deep-fried everything. It’s as tasty and cheap as it is fun.

Junction locals embraced Koji when it arrived on Dupont two years ago for its harmonious mix of quality and affordability (availability over Doordash and UberEats didn’t hurt, either). Should you opt to order in, you’ll be treated to impressive presentations of house creations like rice-free “yellow carpet” rolls served on soy paper and a veg-friendly “veggie dragon” with bean curd.

Bloorcourt loves this quietly reliable neighbourhood fixture for its complimentary snacks (little bowls of congee and tofu along with your soup and salad) as well as sashimi platters, piping-hot tempura, Korean dishes and signature rolls like spicy banana (no, it’s not anywhere near traditional, and yes, it’s awesome). A warning: Service can be spotty. 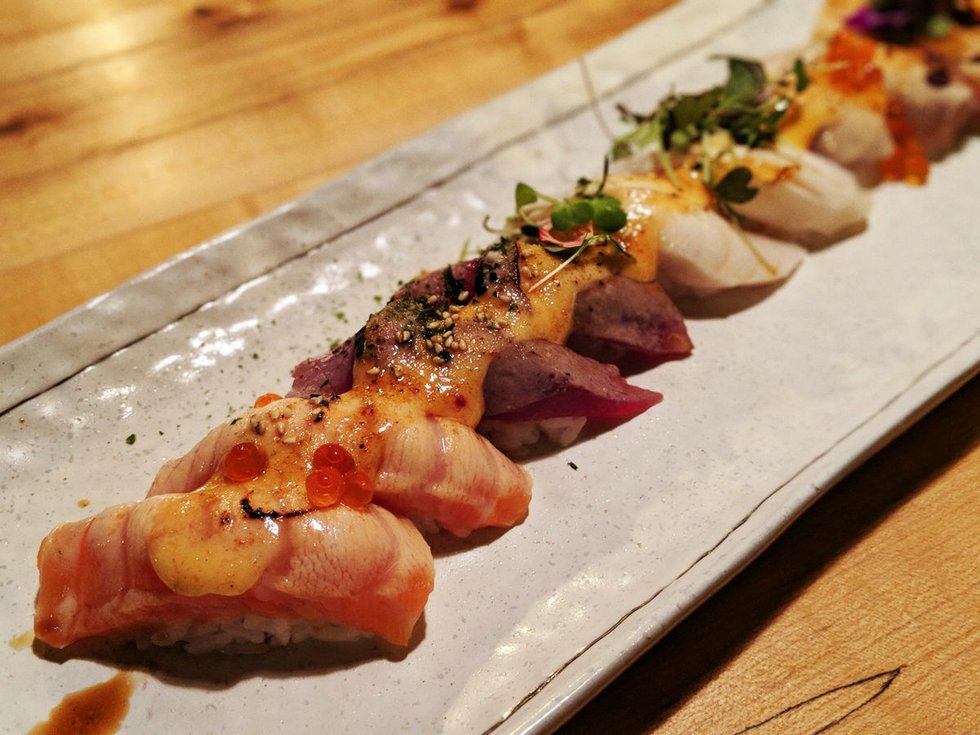 The aburi sushi combo at Yasu is a steal.

My personal definition of Tuesday-night luxury is the aburi platter at this chill izakaya on Queen West. Twenty-four clams gets you 12 pieces of melt-in-your-mouth nigiri, scattered with edible flowers and a slash of spicy mayo – proof you don’t have to drop a C-note on sashimi to feel like a big shot. But if that’s still too rich for your blood, there’s bargain $6 and $7 basic rolls – and the tartares and seriously righteous stone-bowl bibimbap are crowd-pleasers.

In 2018, the formerly takeout-only Sushi Nomi made a big move from its tiny digs on Roncy to an honest-to-goodness dining room at Dufferin and St. Clair, changing its name to Shunoko and embracing an omakase concept. With offerings like seasonally available BC uni, red and black sea bream and sea salt-marinated mackerel – and options all over the pricing spectrum – they’re the talk of the uptown.

The age-old question: Sushi on Bloor vs. New Generation? (Not since Papa Ceo vs. Cora has the Annex seen such fierce debate.) New Gen has its devotees – but SOB seems to have had the most consistent rep, delivering solid portion sizes and fresh flavour year after year. You’ll almost always find a line outside at peak dining times – which, in an area that’s not hurting for cheap sushi competition, is probably the most obvious seal of approval you can find. 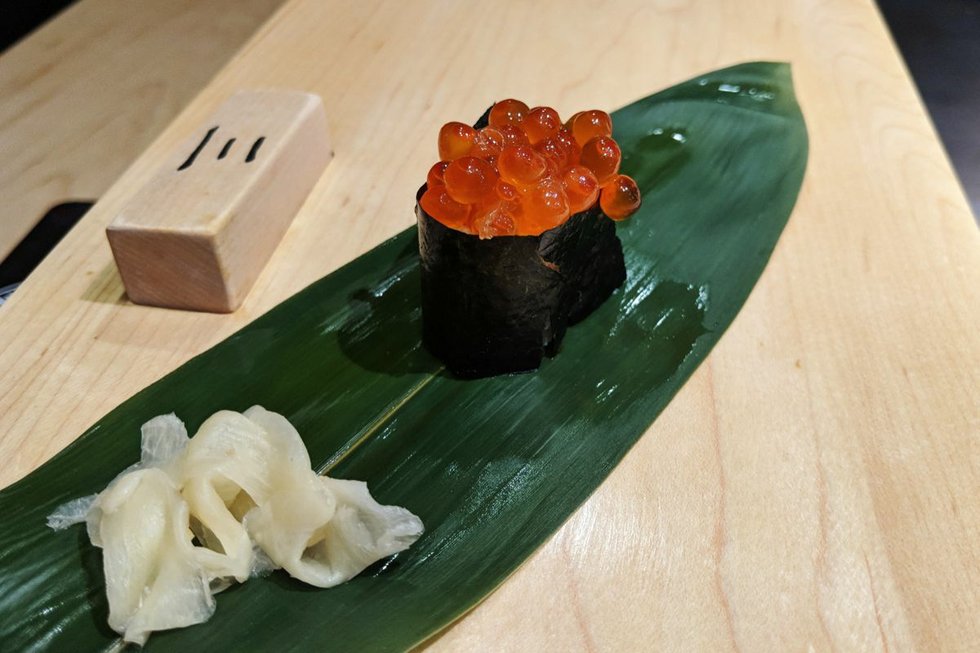 Ikura (salmon roe) nigiri is a frequent feature on the omakase roster at Tachi.

Stand-up sushi bars are common in Japan, but Shoushin chef Jackie Lin’s omakase bar with eight standing spaces (positively sprawling by Tokyo standards) inside Assembly Chef’s Hall is the first of its kind in town. Devote $45 and half an hour of your time (meals are meted out in strict appointments) to a series of nigiri bites: sweet Hokkaido scallop, creamy sea urchin, tuna served in ascending order of fattiness. Their secret weapon is top-grade, exquisitely seasoned sushi rice, which also serves as a base for the takeout chirashi bowls at next-door sister stall Shari. 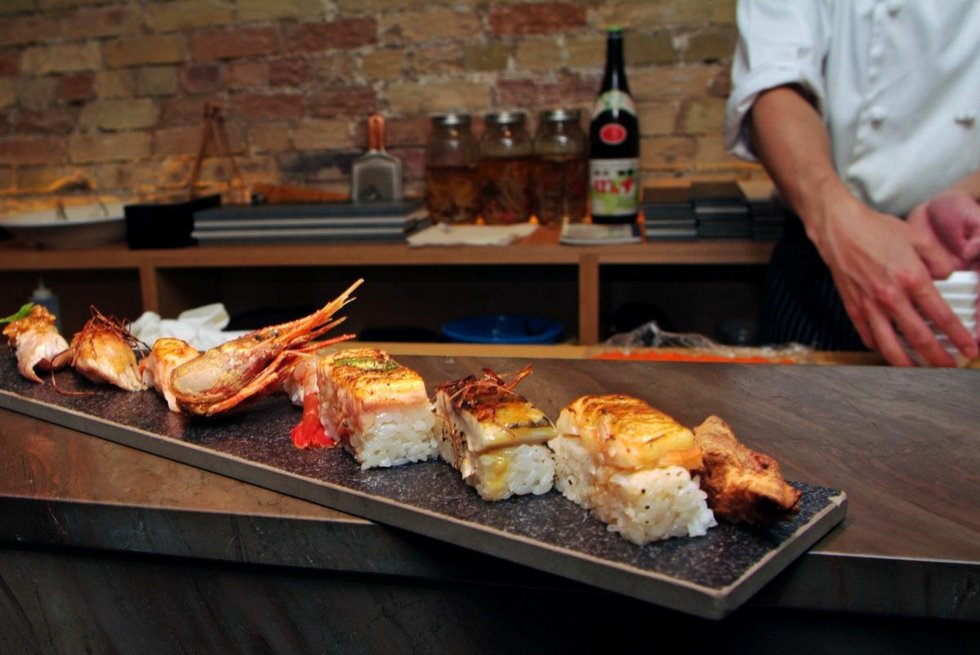 The aburi platter at JaBistro.

Aburi sushi is one of the city’s trendiest styles, with many cheaper spots breaking out the blowtorches. But this upmarket eatery in the financial district was the first in town to get the practice locked down, and their mastery of flavour – on top of novel dishes like lobster miso soup, top-notch service and a sizeable sake list – keeps the special-occasion crowd coming back.

This snug, wood-panelled room near city hall isn’t necessarily all about the splurge – you could throw back a couple of rolls and some gyoza and get out of there for under $30. But if you can, give chef Bruce Bu the opportunity to wow you with the $120 omakase: delicate gold leaf-topped nigiri, dishes like sake-butter clams and gently torched slabs of sesame-drizzled butterfish and white tuna will be your reward. 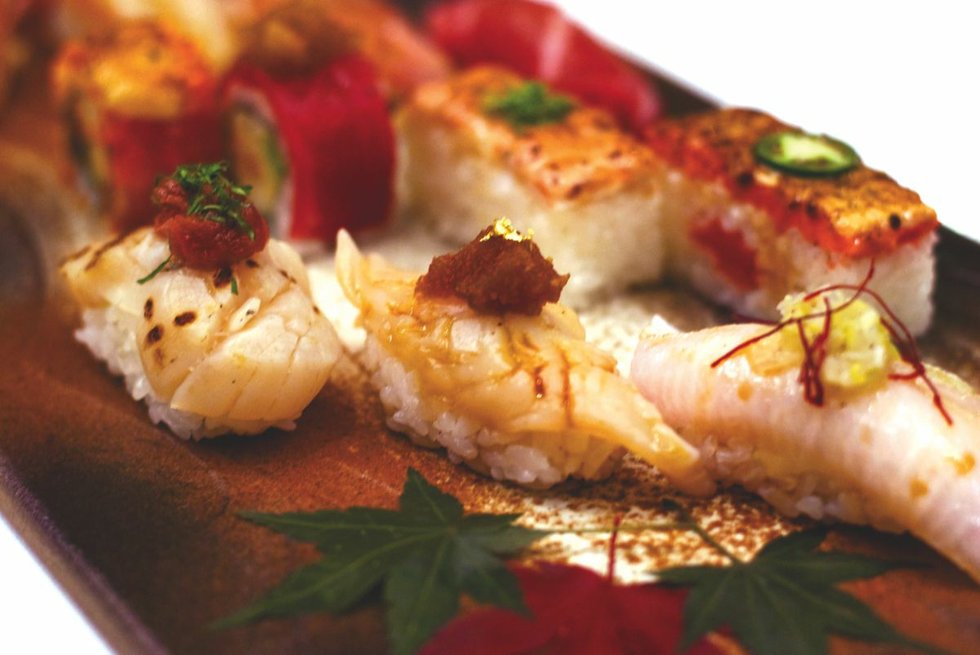 This Vancouver transplant made a serious splash after landing on the waterfront in 2015, drawing date-night diners and the deep-walleted business crowd alike. Pressed, flame-seared aburi sushi is the signature here, but the kitchen turns out a variety of styles and plates, including a kaiseki menu, with flair that gently flaunts tradition while justifying its pedigree and price tag. Don’t miss the sake selection assembled by in-house sake somm Miki Ellis. (For something a little more low-key, check out their a la carte conveyor belt spinoff, Tora, at Yorkdale Mall.)

Chef Nobuyuki Nakamori brings Tokyo technique – and a sense of fun – to Scarborough. At his unassuming strip mall storefront, the chef turns out signature sushi pieces – seared mackerel nigiri and watermelon relish-garnished veggie rolls are highlights. But creative dishes like ceviche tacos, teriyaki jerk chicken and duck hot dogs served in steamed bao might be enough to tempt you away. Nakamori’s omakase is among the most accessible out there, with price points from $30 to $90. Bonus: Godspeed brews replace the standard Sapporos on the drinks list. 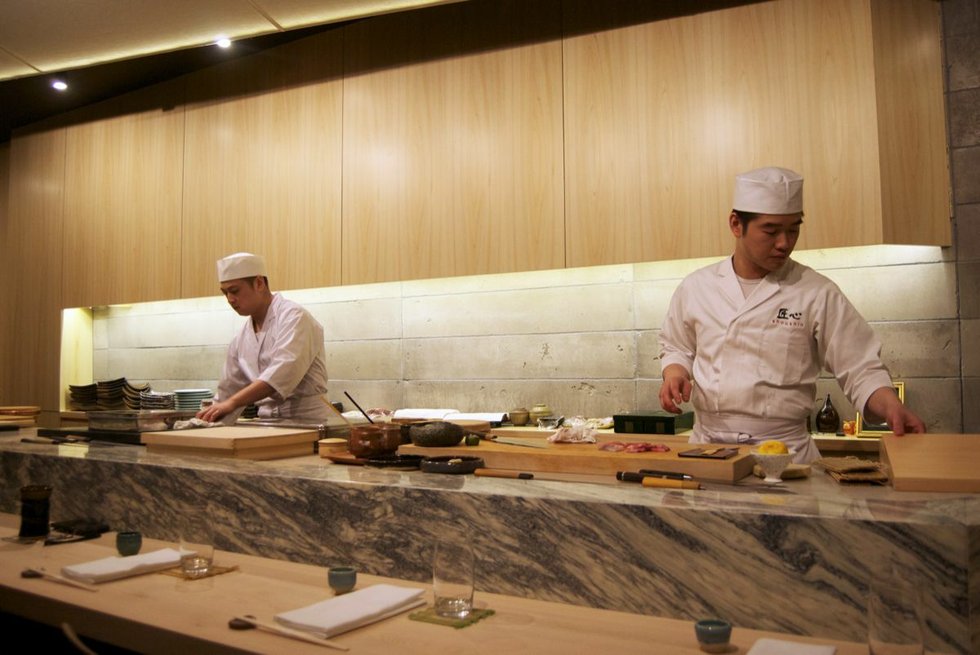 There’s a solemnity and reverence in the air at Jackie Lin’s uptown omakase restaurant. You can see it in the chef’s balletic, practiced movements as he forms individual bites of nigiri – and in the pace of the meal, which requires the diner to eat each piece one by one immediately after it appears above the unvarnished, sanded-wood counter. Lin chooses each fish with a discerning eye and seasons each piece according to Tokyo tradition let him take you to church.

Mitsuhiro Kaji has been called Toronto’s Jiro Ono (the master chef who inspired the doc Jiro Dreams Of Sushi), yet his restaurant has remained one of the best-kept food secrets in town – probably because it’s located across from an auto garage and a drive-thru Tim Horton’s on a snoozy strip of the Queensway. Walk in and you may as well be in Japan in fact, the fish Kaji’s breaking down for the evening’s omakase menu were there just hours ago. 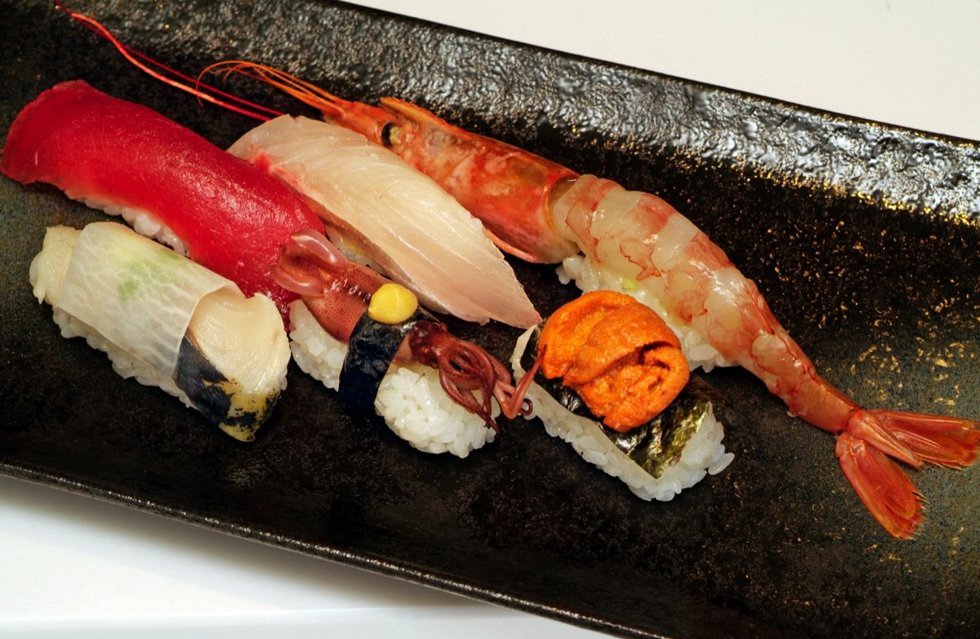 A sampling of nigiri at Yasu.

Yasuhisa Ouchi won’t let just anyone walk in off the street to eat at his Harbord Village sushi counter. (You gotta reserve first, duh.) Ouchi, an alumnus of Nobu’s Melbourne outpost, hand-picks the finest specimens from around the world for his daily omakase menus. Each piece, from delicate monkfish liver to kombu-marinated fluke, is plated solo on glossy pottery, like a precious gem atop a pillow. 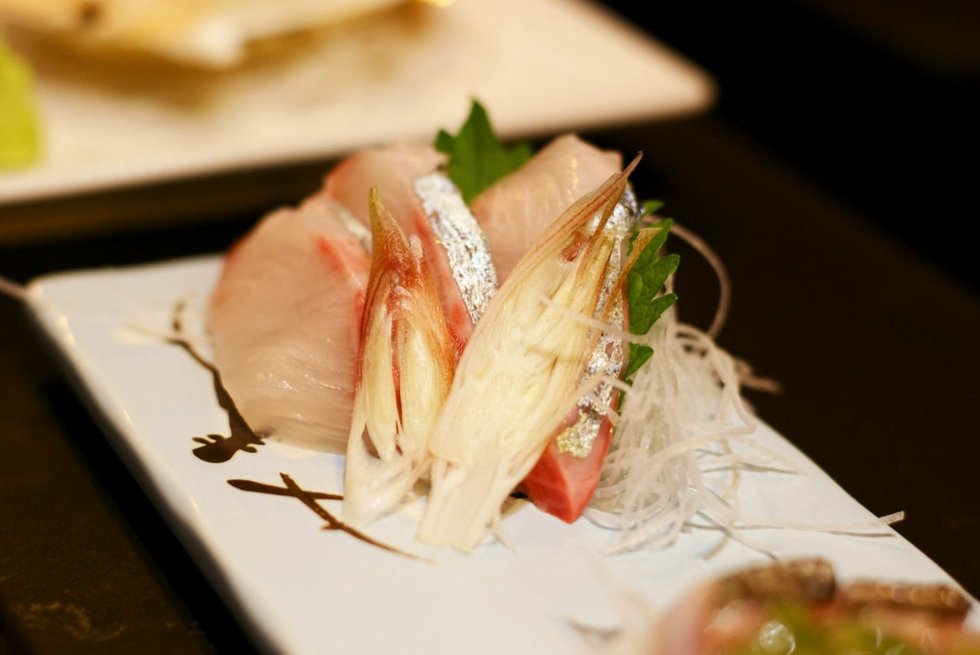 Yutaka’s leading lights are 30-year industry vets who’ve done time at Edo and the Drake, so it makes sense that even their most budget-friendly offerings would be a cut above. At their modern Dundas dining room, you can go cheap (18-piece roll combos for $17) or go big (market-price live lobster sashimi, carpaccio made from seared BC tuna). A robata grill with selections like hamachi neck rounds things out.