Toronto has a booming food scene, with every kind of cuisine under the sun at our fingertips, but there's one. 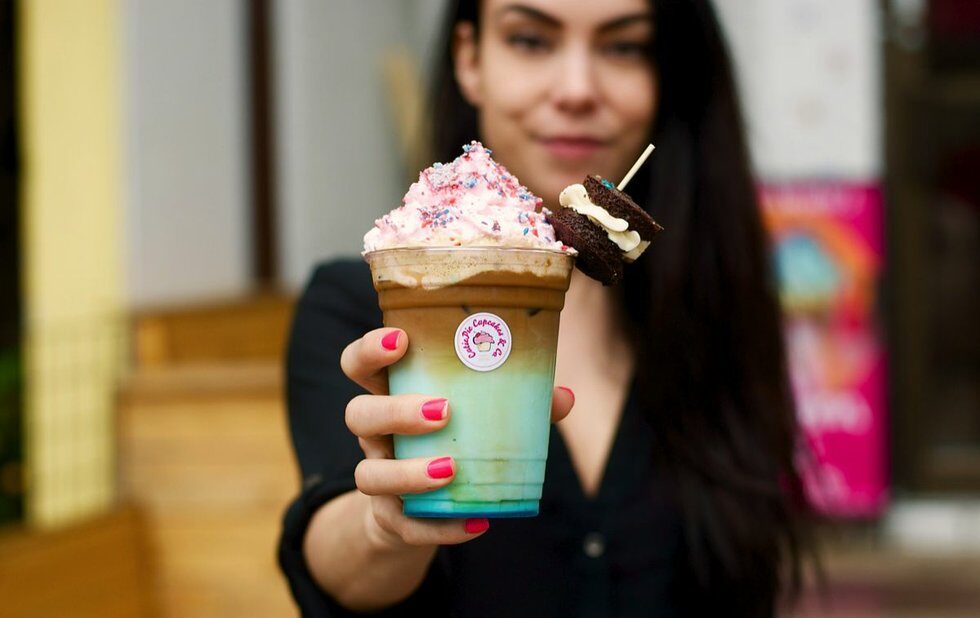 the LattePie (aka "unicorn latte").

Toronto has a booming food scene, with every kind of cuisine under the sun at our fingertips, but there’s one thing our restaurants have never quite been able to pull off: launching a bona fide international food trend. That moment may have finally come, thanks to the unlikely pairing of a tiny Chinatown cupcakery and the world’s biggest coffee conglomerate.

This week, Starbucks unveiled the Unicorn Frappucino, a towering blue-and-purple concoction that immediately broke the Internet. But eagle-eyed local dessert fiends quickly recognized the similarities in name, concept and kid-friendly colour palette to a drink rolled out last summer by CutiePie Cupcakes & Co. (235 Spadina, 416-593-9323, cutiepiecupcakes.ca), a year-old bakery and cafe.

Her “unicorn latte,” a hot or iced latte spiked with blue cotton candy and piled high with rosy-hued cotton candy and pale-blue sprinkles, comes topped with the customer’s choice of whoopie pie. The drink achieved local viral status last summer originally named the LattePie, it was soon dubbed the “unicorn latte” by fans, a title the shop gleefully embraced. “People would be like ‘Uh, can I get that unicorn latte?’ We were like ‘Did you hear that?'”

Their version differs in a few ways from Starbucks’s, which is built on a pink-tinted mango creme base and features a sour blue syrup inside that supposedly makes the drink more tart and purple-tinted as you swirl it. But it’s similar enough that the shop’s fans have been going to bat online for their hometown sugar-fix of choice.

“Our fans on Instagram have been tagging us like ‘This is the original! This is the best drink Ive ever had! Get the original one locally at Cutie Pie!’ I love it,” she adds.

So, how does she feel about the similarity?

“I think its flattering,” she says. “I do see a resemblance. I wasnt there when they made it up, so I dont know exactly where they got the inspiration. But I like that Im on the same tip as some big corporation.”

“And now, unicorn magic is everywhere, which is amazing,” she laughs. “Theyve helped the propaganda.”

Do you believe in magic? Capture the color-changing, flavor-changing totally-not-made-up-limited-time-only Unicorn Frappuccino before it disappears. (Available across Canada until the magic runs out)

Magical creatures and Lisa Frank colour schemes are the standard at CutiePie the cupcake boxes are screaming pink, and there’s a decal of the unicorn emoji on nearly every surface. When coming up with the coffee program for her cafe, Abdilla a baker, not a barista by trade found herself struggling to create something that fit. A friend suggested she work her cupcake and whoopie pie flavours into the drinks, starting with cotton candy.

“At first, we were getting criticized so much people leaving Instagram comments like you guys ruined coffee,” she laughs. But word got around swiftly, as did tantalizing images of the pink-and-blue drink now, she says, she gets people from out of town making special trips to slurp one down.

The term “unicorn latte” later popped up in the blogosphere when New York cafe The End Brooklyn began serving their own $9 drink earlier this year. Comparing their drink to Starbucks and CutiePie, it’s a unicorn of a decidedly different colour a health-counscious $9 elixir made of coconut milk, cayenne and lemon, tinted a pretty sea-blue with E3 algae and topped with edible flowers.

The sugary Starbucks version, out now until April 23 is earning decidedly mixed reviews but Abdilla says the original, while a little richer than your average latte, isn’t nearly as sugary as it looks. CutiePie staffer Meenakshi Bhojwani say some even add extra simple syrup to their drink or scarf down the whoopie pie perched on top, then order a giant cupcake on the side.

“Its not that overpowering,” Bhojwani says. “Its light, its nice, its flavourful.”

“We also make them for kids without coffee, or decaf, and we can spike them with ice cream as well,” Abdilla adds (pink-and-blue champagne-flavoured ice cream, to be specific).

“We also feel its very important to tell people that our latte is made with 200 per cent real unicorn magic, not from concentrate.”