Where to watch the Raptors in the NBA Finals in Toronto 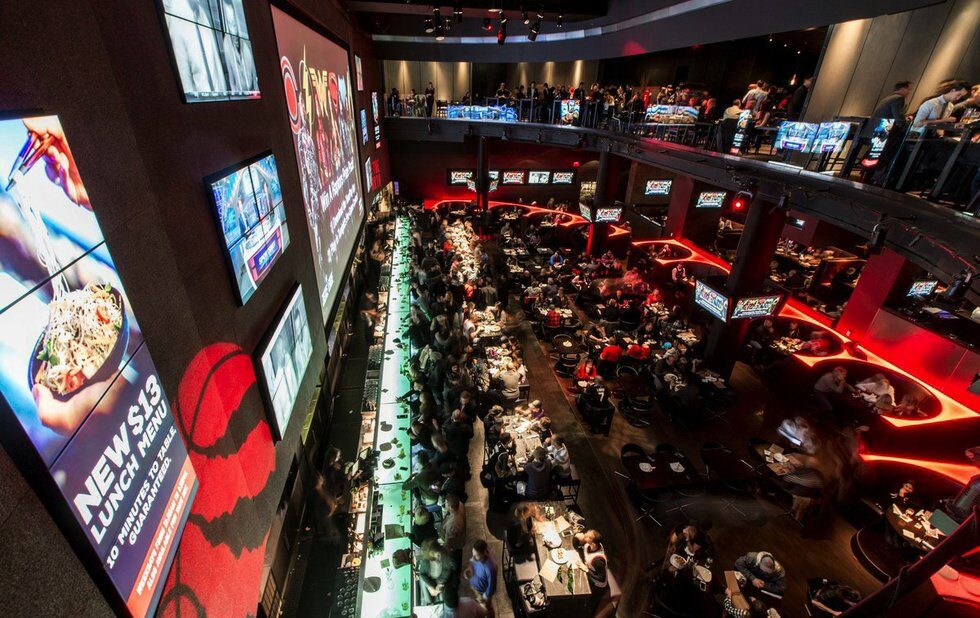 The Toronto Raptors enter the NBA Finals tonight for the first time ever, and if you don’t have a ticket or you’re not willing to camp out for a spot at Jurassic Park (or you’re not one of those lucky souls with cable) you might be left wondering where to watch the Raptors face off against the Golden State Warriors. These Toronto restaurants and bars are showing Game 1 tonight and will likely be continuing throughout the series.

Raptors fans are known to pack into this sprawling food hall, with multiple theatre-style TVs all showing the game with sound (minus the commercials, when a DJ spins mostly Drake). It’s almost like being at the game, except with better food options. 11 Richmond West, at York, 647-557-5993, assemblychefshall.com.

The Chinatown bar will be streaming every game in the series in HD on an 88-inch projector screen. 460 Dundas West, at Spadina, 647-347-8880, facebook.com/BigTroubleBar

Toronto’s fave Dutch restaurant will be showing the games on two screens and will have Indonesian chicken wings on special. 1333 Danforth, at Linnsmore, 647-349-5722, borrel.ca

Recently opened in the former Ceili Cottage space, this pub will be screening the game on projector screen (plus three more). In addition, they’ll be offering burger and curry specials and giving away Raptors swag. 1301 Queen East, at Alton, theburren.ca

Regular comedy programming will still be going on in the stage rooms, but the main bar of this Bloorcourt community hub will be all Raptors. Plus, the between-plays banter will probably be better than anywhere else on this list. 945 Bloor West, at Delaware. 416-551-6540. comedybar.ca

The Queen West sports bar has been showing the Raps game on five screens (and reliably draws a rowdy crowd). 1188 Queen West, at Northcote, 416-535-3111, facebook.com/councillorqueenwest

There will be a free screening at the Warehouse Venue within the park starting with game 2 on June 2. It’s one of many Jurassic Parks now set up throughout the GTA – because one huge tailgate party is no longer enough. 35 Carl Hall. twitter.com/downsviewpark

You can expect a pretty good setup from a bar with the word “video” in its name, and this bar doesn’t disappoint. Watch the games with full HD and sound on a big screen with $5 tall cans of Wellington and DJ-soundtracked after-parties. 831 Dundas West, at Euclid, instagram.com/dundasvideo

Riverside locals have been packing this “rock and roll sports bar” during the finals. Call in advance to reserve a table, or hang out in the standing-room-only “tailgate zone” complete with beer tub. 725 Queen East, at Broadview, 647-343-1698, jasperdandy.ca

The sound will be on and the Big Rock brews will be flowin’ at this Liberty Village brew pub. 42 Liberty, at Atlantic, 416-304-9403, libertycommons.ca

Watch the game on a 12 x 20 feet big outdoor screen, set up right in front of Lake Ontario on the licensed patio of Vista Eatery. 955 Lake Shore West, ontarioplace.com

Cineplex is hosting free Raptors viewings throughout Canada, but none, for some reason, in downtown Toronto. But this Cineplex-owned venue will have a Playoff Rally party, with full audio and prizes, at both the Toronto and Mississauga Square One locations. RSVP here. 255 Bremner, therecroom.com

If you’re after a decidedly non-sports-bar vibe, take in the finals at this brand new Mediterranean cocktail bar in Corktown. 354 King East, at Power, 416-546-3155, reynaonking.com

This King West spot has become a bit of a celeb magnet since opening – Serge Ibaka and Kawhi Leonard have been spotted hanging out, so it’s no surprise that they’ll have the big game on. 668 King West, at Bathurst, 416-900-4668, regularsbar.ca

One of TO’s best new restaurants is showing the game on the big screen, with drink specials and food available all night long. FYI: Sister spots Pinky’s Ca Phe and Hanmoto will be screening the game, too. 1241 Bloor West, at St. Clarens, @seoulshakersclub

This newly-opened sports bar will have the Raps game up on a series of screens. Bonus: Giant Caesars with a bunch of stuff on them. No reservations. 107 King East, at Church, scorepubgroup.com

Both locations of the artisanal sausage joint and beer hall – King West and Union Station – will the showing the finals. 609 King West & 65 Front West, wvrst.com