Where to watch the Toronto Raptors in 2020 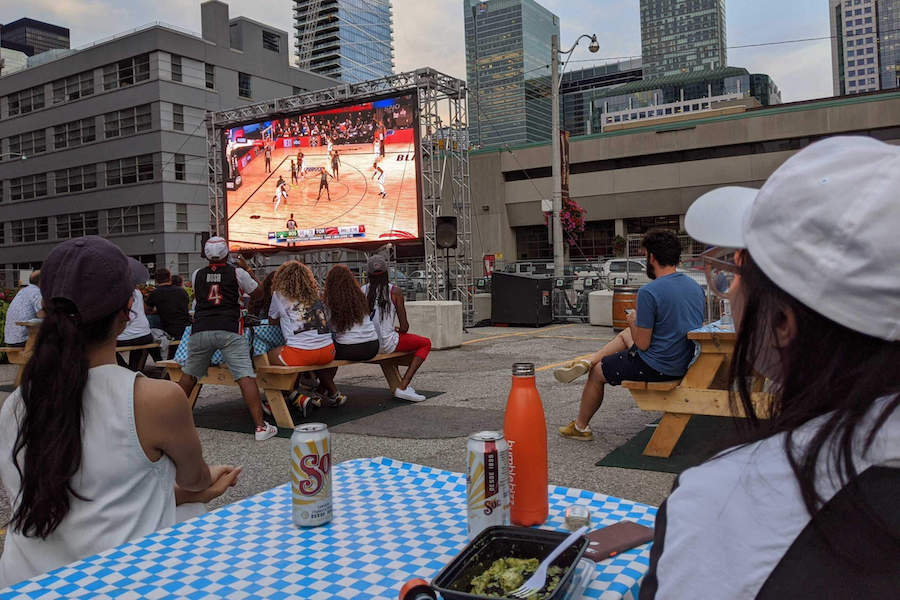 After an extra long period of time to bask in their NBA champion status, the Toronto Raptors are finally defending the title.

But this year’s basketball playoffs look quite a bit different from last year’s – and not just because Kawhi Leonard is playing for the Clippers.

Thanks to the pandemic, the games are happening in a fan-less bubble within Orlando, Florida’s ESPN Wide World of Sports Complex. Meanwhile, Scotiabank Arena is hosting the NHL playoffs (minus the Toronto Maple Leafs, who were eliminated early) much later in the summer than normal.

Despite the changes, the Raptors remain incredibly fun and likeable, and they have a good shot at another finals run.

Raptors fever took over Toronto last year, but Jurassic Park – the square outside the arena that hosted shoulder-to-shoulder watch parties – isn’t a thing this year. Big crowds are still a COVID-19 no-no. Nor is it safe to pack a bar full of screaming fans releasing celebratory virus droplets every time Kyle Lowry takes a game-saving charge.

But Toronto is in stage 3 of Ontario’s reopening plan and bars are open again. Some gatherings can also happen safely with physical distancing precautions.

Here’s a roundup of places you can watch the NBA playoffs. This post will be updated as the playoffs progress, so let me know if we’re missing anything at richardt[at]nowtoronto.com.

The closest thing to Jurassic Park is this drive-in venue at Ontario Place – very fitting for Toronto’s drive-in summer. Opened by Raptors owner MLSE and concert promoter Live Nation, the venue lets you watch games on a 40-foot screen from the comfort (and distance) of a car. There’s room for 220 vehicles, which means somewhere in the vicinity of 800-900 people, so it’s the place to be among fellow fans. But you’ll have to get creative to share camaraderie over the sound of your car radio broadcast. 955 Lakeshore West. Minimal donation of $25 to MLSE Foundation. Reserve here.

What used to be Cabana Pool Bar is now a hulking 50,000-square-foot socially distant outdoor restaurant on the roof of Rebel. They’re showing the Raptors’ first-round matchup against the Brooklyn Nets on their big screen if you can score a reservation. 11 Polson. Reserve on OpenTable.

The recently reopened Dundas West bar has pivoted from video game bar to sports bar. Until they deem it safe, Get Well has turned off the popular arcade games and is using them as separators for “socially distant TV watching hubs” (essentially booths with private TVs). Sound is on, too. 1181 Dundas West.

Toronto’s new normal includes outdoor TVs blasting Raptors games to sidewalk patios. That’s what you get at this hipster sports bar on Dundas West, though there’s also some socially distant seating to be found inside with more TVs. 1280 Dundas West.

Dock Ellis’s sister bar Aviary is also showing all the games on their patio and indoors. They’re the proprietor of Longslice Brewery, so grab one of those beers and watch Steady Freddie hit some clutch threes. 484a Front East.

Another bar where you can watch from the patio, this Queen West sports bar is taking full advantage of the CafeTO program. Watch Pascal Siakam spin move to your heart’s content while downing $5 Ace Hill tall cans. 817 Queen West.

This Bloor and Lansdowne bar is serious enough about Toronto sports to have a news section about the teams on its website. You can watch games in front of or behind the bar – they’ve got patios on both. The games are on inside, too. All around basketball. 963 Bloor West.

Wayne Gretzky’s rooftop patio has its own beach theme unrelated to the Great One, but it’s still a great place to watch sports. Comfortable enough to stay for Stanley Johnson garbage time minutes. 99 Blue Jays Way.

UPDATE (9/11): Just in time for Raptors-Celtics game 7, we’re doubling this list with eight more spots to watch the game.

The Fifth and the Ballroom have teamed up for this outdoor bar in the parking lot standing between them, around Richmond and John. Basically a big empty space filled with picnic tables spaced six feet apart, it’s a perfectly pandemic-friendly way to watch the Raptors on a big screen with the sound on, mini-Jurassic Park style. Food and drinks are on a cashless token system, and they’re a little pricey, but consider it the price of admission. You’re best off reserving in advance. 229 Richmond West. Reserve here.

The Cadillac Lounge may not be around anymore, but its beautiful patio is. That’s where this little outdoor sanctuary sits as a spot for beer, BBQ and basketball. Grab a seat on a picnic table within eyesight of the screen and gather, distantly, in what has been christened Jurassic Parkdale. 1296 Queen West.

It was packed and alive with championship energy at Collectif Nude’s Raptors watch parties last year at Assembly Chef’s Hall. It’s the kind of scene that you yearn for, thinking back on it. Things are much lower capacity and distant this year, but there are still DJs and atmosphere at the new location. Book your spot early on Instagram. 69 Bathurst.

This pub was one of the first patios to open as soon as they were allowed, which caused lines through Yorkville. They’ve got plenty of outdoor space for you to watch while the weather stays warm enough. 142 Cumberland. Reserve here.

This Little Italy cafe is often named as one of the best in the city, and its reputation mostly comes from its popular College patio and its lively soccer-watching parties (it’s certainly not the food…). That Dip patio has gotten even bigger during COVID, and its just as lively a spot to watch Raptors game sevens as it is for the World Cup. Just be prepared to wait in line. They don’t take reservations. 594 College.

This King and Bathurst brewpub has a huge and spacious patio, and they’ve got big-screen TVs where you can watch every sneakily clutch OG Anunoby rebound. Plus, lots of beer. 115 Bathurst.

If the weather gets too cold to watch outside (and hopefully that means the Raps are on their way to the finals), Pennie’s offers an indoor environment with a priority on safety. There’s limited seating. Literally just space for 20 people, so they’re asking for groups of two and four. They also boast of a “stadium set-up” that’s both spaced out and has sightlines to the TVs from anywhere. 127 Strachan.

Toronto’s oldest bar was all set to reopen on St. Patrick’s Day, and then everything shut down. Now, six months later it is officially open again, and its showing Raptors on the big screens. 667 King West.