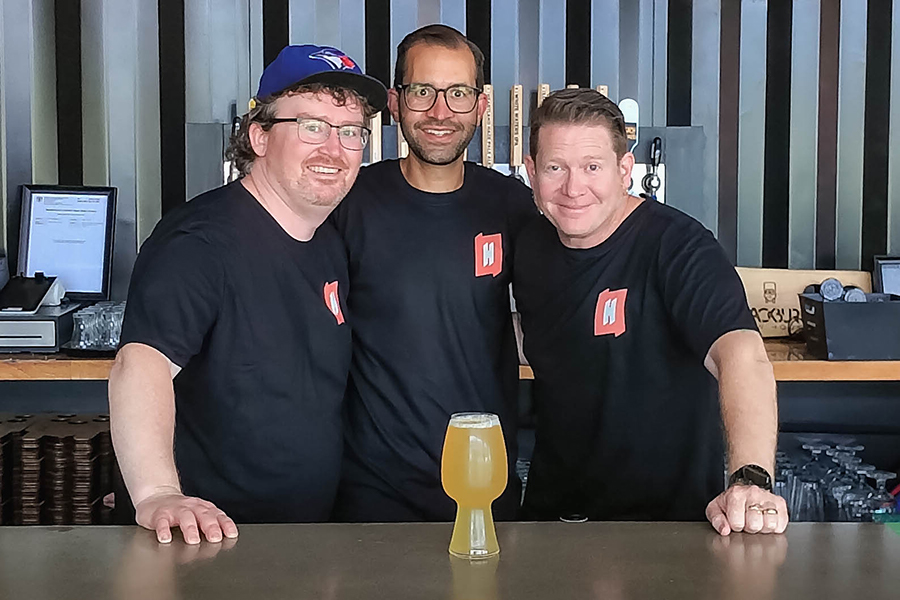 The idea came to mind when former Mill Street Brewery co-founder Steve Abrams quit drinking alcohol in 2019 and wanted to find a substitute.

“Being in the beer industry for a long time, it can take its toll on you,” says the Toronto brewer. “I had just hit that point where I said, I have to hit the brakes.”

“I started looking for non-alcoholic options. And there weren’t a lot in Canada.”

Abrams says he’s seen sales reps and brewers developing gout or liver disease in their 20s, and he was afraid of a similar fate. But non-alcoholic beer didn’t seem like much of an option until recently.

“When we look to Europe and Southeast Asia, the non-alcoholic beer scene is fully established. It’s a significant portion of the beer business,” says Mike Cuch, Harmon’s co-founder and business consultant.

It wasn’t until a trip to San Diego that Abrams realized it was possible to have non-alcoholic craft beer that matched what he was looking for.

“I had a field day just buying one of each, trying them all,” he says. “It certainly satisfied my craving for beer because it had all the hoppy flavours and all the different styles that I knew in regular beer. They were pulling it off.”

Realizing that it was possible to fill the gap of non-alcoholic beers in Canada, he decided to collaborate with brewer and Niagara College professor Rob Doyle, who’s been in the beer game for 20 years. The challenge, they say, is making a beer that isn’t “good for non-alcoholic beer,” but a good beer, period.

“We wanted it to be able to stand up against any of the great craft beers in Ontario and be counted in that lineup,” Doyle says. “It has to drink like a beer. It has to come across as an original idea in the craft world.”

After nearly a year and half of meticulous experimenting, brew sampling and making sure the alcohol percentage was below 0.5 per cent, Harmon’s launched three beers: Half-Day Hazy IPA, Jack Pine Pale Ale and Lunchbox Lagered Ale.

I got to try the Jack Pine Pale Ale and the Lunchbox Lagered Ale. The Pale Ale left a citrusy, bitter and hoppy finish true to its name, while the lager was a lot more mellow and crisp. Both gave that pleasantly familiar prickly carbonated feeling that you get when drinking beer.

While the founders keep their specific brewing methods close to their chests, what they can tell us is that the methods they follow are traditional and sustainable. They avoid using low-temperature vacuum distillation, a process that involves a lot of water to boil and separate the alcohol from the beer.

“We ferment our beer fully, we just don’t generate the alcohol,” Doyle says. “So as a result our beer tastes like beer. It drinks and tastes like the real deal.”

“We wanted to go through the process of getting organic certified mainly to take care of the soil around us. We’re not here to trumpet it off the rooftops, but it’s just something we care about.”

Abrams also says that since there’s a growing demand for this kind of beer, it’s important to make their products as accessible as possible. Currently their beers are available online across Canada and in local stores in the GTA, like the Big Carrot in Greektown and Lakeview Cheese Galore in Port Credit, Mississauga.

“[We’re] purely doing this for the love of beer and giving people an option,” he says.