Inside Stock T.C., the new grocer and restaurant from Terroni and Cumbrae’s 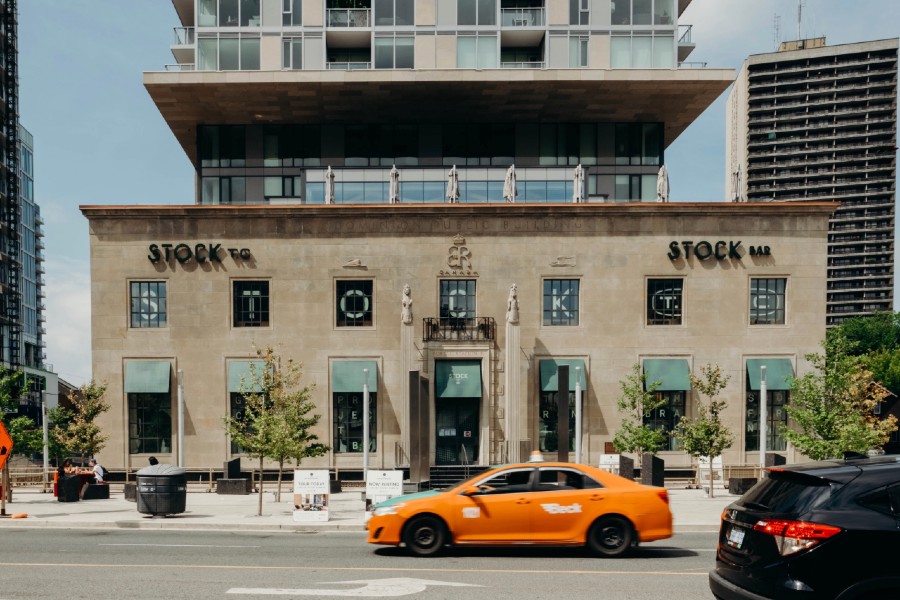 Stock T.C. is housed within a historic post office

Nothing is small about Stock T.C. (2388 Yonge, north of Eglinton), the new joint venture from the owners of Terroni and Cumbrae’s that opens on Saturday (August 22).

It’s a grocer, pantry, pasta-puller, wine and cheese shop, butcher, bakery, coffee bar, lunch counter, pizzeria, gelateria and full-service restaurant – all at the same time. Over three floors, it’s a 500-capacity everything store, and it’s been years in the making.

Cosimo Mammoliti and Stephen Alexander, owners of Italian restaurant chain Terroni and butcher Cumbrae’s, respectively, have been friends for years. Both have been running their respective empires since the early 90s. The Queen West location of Cumbrae’s is neighbours with Terroni and its bakery/cafe Sud Forno. That’s where they hatched the idea for Stock T.C.

“Having our coffees and watching our customers go back and forth, we’d say ‘wouldn’t it be great if we could just give them everything?'” says Alexander at a media preview.

“The evolution of our businesses, both of them, is this,” continues Mammoliti. “This is the future that we both see.”

It’s a future that’s been sped up by the pandemic, a time when many bars and restaurants have taken a hybrid approach, becoming neighbourhood grocers while dining is in flux. Stock T.C. has a similarly for-the-people mindset: they envision it as a place you can come with 10 bucks in your pocket or an unlimited credit limit – but, like the similarly concepted Eataly, it’s on a much bigger scale.

The space is in the old Postal Station K building, a historic art deco post office built in 1936. The history of the area stretches back the the Upper Canada Rebellion of 1837, and the public Montgomery Square now sits in front.

When you enter, you can go straight to the coffee counter, where you can grab an espresso and a croissant or bomboloni – the pastries are all made in house (along with most of everything else).

Next to that is a pizza counter, with slices of capricciosa, sausage & rapini or mortadella & pistachio.

The counters are festooned with house-made pasta, which you can buy fresh, frozen or dried. You can also get jars of store-bottled sauce or little single-serving containers that you can drop in a pan and go.

There’s a cheese cave with local and international cheeses, some of which are exclusive to the store.

There’s a butcher on-site, as you would expect from Cumbrae’s. The meats, cheeses and everything else goes into every aspect of the store, including the restaurant upstairs.

There’s a small seafood section, where everything is “skin sealed” so it doesn’t smell.

The lunch counter is a little more American influenced. There are breakfast sandwiches, a rotating selection of pastas, a salad bar, sandwiches including steak, rotisserie chicken and fried chicken.

The thing that Alexander and Mammoliti are most excited about is the smash burger, which gives you two patties of satisfying comfort food.

The restaurant, which takes up the second and third floor, isn’t quite open yet. They’re aiming for four-to-six weeks, though it depends on how comfortable people will feel dining indoors. The patios, which account for 220 out of the 500 seats, will not be open until next patio season (whatever that will look like).

Eventually that restaurant will serve up dishes like steak frites, lobster rolls, pastas, pizza and another burger – this one more of a “burger royale.” There are multiple bars, with plenty of bourbons, rums, whiskeys and tequilas.

Design elements like postage stamp floors and wine-housing mailboxes refer back to the history of the building.

Here, like everywhere else, is very open and airy. You can see people working all over the building, masked and holding knives. “We’re all about transparency here,” says Mammoliti. “Nothing is hidden.”