NOW MagazineFood & DrinkRestaurants we cant wait to eat at in 2019

Restaurants we cant wait to eat at in 2019

Bar Buca EglintonWe could all use a little more Bar Buca in our lives. Fortunately, Rob Gentiles snacky offshoot of. 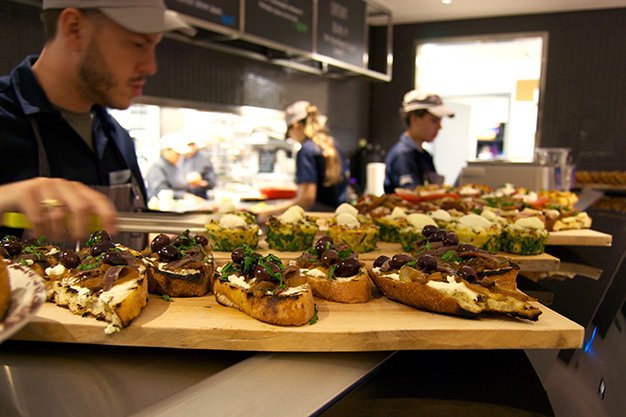 We could all use a little more Bar Buca in our lives. Fortunately, Rob Gentiles snacky offshoot of Buca has opened an uptown location, and its open from really early until really late, offering breakfast and baked goods in the morning, plus pizzas and small plates until the wee hours. (Word to the wise: get the fermented smelt with chili.)

Located in the southern reaches of the Beaches, the 400-seat Neruda might be home to the worlds largest Argentinian-style wood fired grill. But Romain Avril (Lavelle) and Sylvain Assie (Cafe Boulud) also looked to other parts of the globe for inspiration, drawing from the Middle East and Mediterranean for a multi-pronged menu of grilled meats (including dry-aged steaks, duck and lamb), mezes and a weekend brunch buffet.

Jon Vettraino, formerly of The Commodore, opened this stylish Italian spot at the tail end of 2018. Occupying the space previously held by Branca, Viaggio puts a modern, Canadian spin on classic Italian dishes. On the menu, that translates to things like tagliatelle with butter-poached Nova Scotia snow crab (fitting, given the Commodores seafood-first menu) and venison carpaccio with crispy sunchokes.

Bloors answer to downtown food halls like Assembly is finally set to open in the early days of the new year. Along with established entities like Mean Bao, PG Clucks and Eat BKK, youll be able to try out spots like El Nahual and Smoked Up Meats.

Well-regarded modern Canadian spot Canis will soon have a little sibling up the street: Apres Wine Bar is set to open soon at Beaconsfield. Signs went up on the window in December, so hopefully opening day is imminent.

Parkdale BBQ fans mourned when Colin Tooke and Ian McGrenaghan decided to shut down the five-year-old meat shack. But it looks like something entirely new will be arriving in that space before too long and since its from the folks who also brought us Grand Electric, were willing to bet its going to be awesome. (The big question: are they keeping the neon signs?)

Peer To Peer Hospitality is on a winning streak: In the past three years, theyve opened Chabrol, Atlas and Tanto, all to rave reviews. The latest in the family is Lapin, a new spot set to open on King West sometime this year.

In addition to that shiny new Nordstrom Rack store, the Bloor East development will soon be home to a new location of McEwan, Mark McEwans eponymous gourmet grocer. The new location will feature a cafe (fueled by Lavazza), pizza al taglio by sister restaurant Fabbrica, a sushi bar, a hot table of seasonal eats, a salad bar, a dry-aging room and more.

David Lees Nota Bene was the talk of the town when it opened in 2008, and its closing at the end of December marked the end of an era. But heres what Queen West diners can look forward to: a new concept from Lees successful Planta vegan empire. While not much is known about the menu, the 7,000-square-foot restaurants design will draw inspiration from bustling Chinese alleyways.

Miku is going from as downtown as you can possibly get (with a location right on the lake) all the way up to Yorkdale with its new venture. Tora is set to open next to the Yorkdale Restoration Hardware location sometime this winter, and though menu details havent been revealed, expect pressed and blowtorched sushi (the companys signature dish).

Kay Pacha chef Elias Salazar is expanding his portfolio this year with Waska, a new venture that will encompass a restaurant (location TBD) as well as private chef and catering services. Waska will explore different facets of Peruvian cuisine, including Italo-Peruvian and nikkei (Peruvian-Japanese) dishes.

Chef Tsuyoshi Yoshinaga has had a hand in some of Torontos top-tier sushi destinations, including Yasu and (most recently) Shoushin. Now hes set to open his own eponymous restaurant in Yorkville. Details are scarce, but you can bet sushi snobs are waiting with bated breath.