Ontario has eliminated the subminimum wage for restaurant workers, but people in Toronto's food service industry say $15 is not enough to eliminate tipping 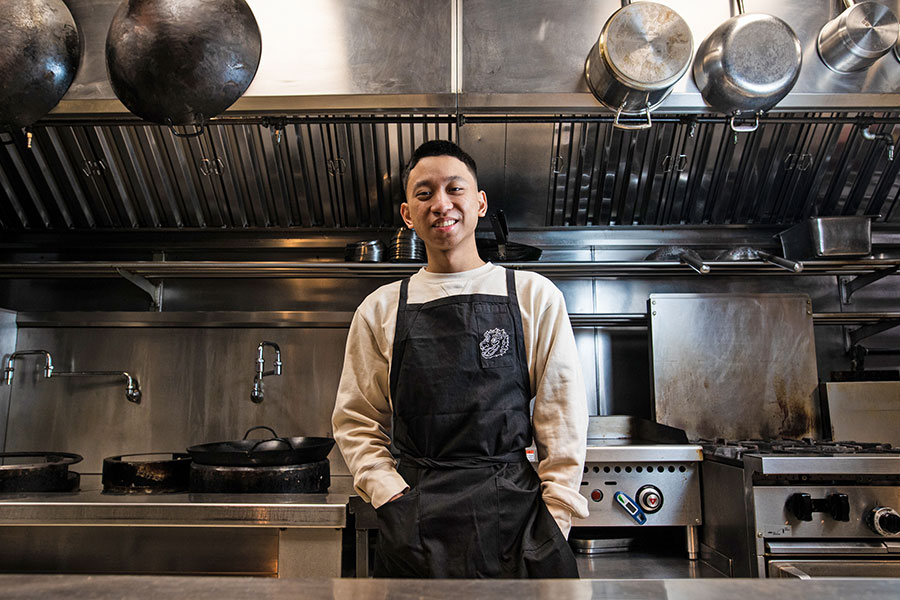 Jonray Diamante, a cook at Mimi Chinese, says tips are useful "backup money" even with a good, consistent wage and benefits.

Until the start of 2022, many restaurant workers in Ontario were working for less than minimum wage. Not anymore.

This month, Ontario eliminated the subminimum wage of $12.55 per hour, also known as the “liquor servers” wage. Now, servers, waiters and bartenders will earn the same minimum wage as all other workers – $15 per hour.

But just how effective is the new legislation for servers in Toronto? And what will it mean for tipping?

For A E Persaud, co-founder of the Toronto Restaurant Workers Relief Fund, the new legislation is welcome and overdue, but should just be a starting point.

For some servers, tipping is still important

While servers previously earned less than minimum wage, there was an assumption that customers would pay the difference through tips.

In a November 2021 press release, the government of Ontario said the new legislation is their way of making sure servers are “treated more fairly.”

But is $15 enough? The Ontario Living Wage Network calculates the living wage in Toronto be $22.08, so for many the minimum wage is still not enough to solely rely on.

For Persaud, that means tipping will still need to be a part of the pay structure unless wages go up considerably higher than the minimum, which means tipping probably won’t be a thing of the past just yet.

Tipping, a concept with racist origins, is a controversial practice. While some servers appreciate the ability to make a lot of extra money on tips, the practice comes with racial and gender-based power dynamics and often creates competitive inequalities between front and back-of-house restaurant workers. With the previous subminimum wage, it also meant pay was rarely predictable and relied on the discretion of customers, not employers.

Emma Liberta, a full-time front of house server at Jack Astor’s at Yonge and Dundas, says tipping culture is something she favours, but it can be very inconsistent, especially after tipping out – sharing tips with the bar and the rest of the restaurant staff.

This is why Liberta is more receptive to receiving a minimum wage with tips instead of the subminimum wage.

“Initially I was nervous that once everyone knew that we were going to $15 an hour, we wouldn’t get as much tips,” she says. “But then once I started thinking about it realistically, it’s much better to be making $15 an hour and being able to have that set money, as opposed to the risk of not being able to even get anything from tips.”

Jonray Diamante, a cook at Mimi Chinese on Davenport, also finds tipping to be beneficial, even with a consistent minimum wage.

As a back-of-house employee who is paid $18.50 per hour with health benefits, he considers tipping his “backup money.”

“If your actual wages go to your rent, your food, your water or whatever bills you pay, your tips could be used for whatever else you want to do,” he says.

It wasn’t always like this for Diamante. Prior to his current job, tips were more than just “backup money.” He says he heavily relied on tips due to his low wages as a cook. But as a back-of-house worker, he would see very little of the tips his workplace would get.

Now at Mimi Chinese, however, he says the tips are distributed better towards back-of-house staff, since the restaurant considers them integral to the daily operations.

In theory, tips are supposed to be a discretionary reward for good service. In practice, it tends to be a standardized percentage of the meal’s cost, which then factors into workers’ pay. So will raising the floor get rid of it?

Alex Moore is the owner of Bampot on Harbord and Bathurst. Throughout his 10 years in Toronto’s food service industry, Moore has experienced poor working conditions and payment.

Now, Moore says he’s “trying to change the script” at Bampot. Instead of paying baristas and servers minimum wage, he pays them $22.50 an hour, 42 cents more than the calculated living wage in Toronto.

Olivia Ruttera, a barista and server at Bampot, feels a lot better mentally, not having to constantly work and rely on tips in order to make a living.

“Now I’m not always worried about living paycheque to paycheque,” says Ruttera, who previously worked for minimum wage at other server jobs in Hamilton and the surrounding area. . “Now [getting tips] isn’t my main focus.”

While tipping is still an option at Bampot, Moore says he plans on eliminating it in the near future. Instead, he plans on slightly raising the price of menu items to ensure his employees are being paid adequately.

“Not only does this structure work, but any business that can’t make it work doesn’t deserve to be in business,” he says. “If you are so concerned that your restaurant would fail without paying somebody enough to live off of and make them heavily rely on tips, you should get another job, or maybe you should do the work instead.”

The other question is whether customers will change their behaviour based on the elimination of the subminimum wage. Will it adjust the way they tip?

Whether some restaurants are eliminating tips and substituting for livable wages or not, Persaud says one benefit of the new minimum wage for servers is that servers finally have options.

“The reality is that we are going through a lot of stages of reshaping the landscape for food service workers. The new policy has restaurants reshaping their pay structure,” they say.

“We can now choose to work at a restaurant because tips are included, or not included, because it offers a livable wage. Having more options is great.”

Why some Toronto restaurants are ending tipping