For every $1,000 raised for the North York Harvest Food Bank, Josh Neubauer will commute for a full day dressed as a spicy root vegetable 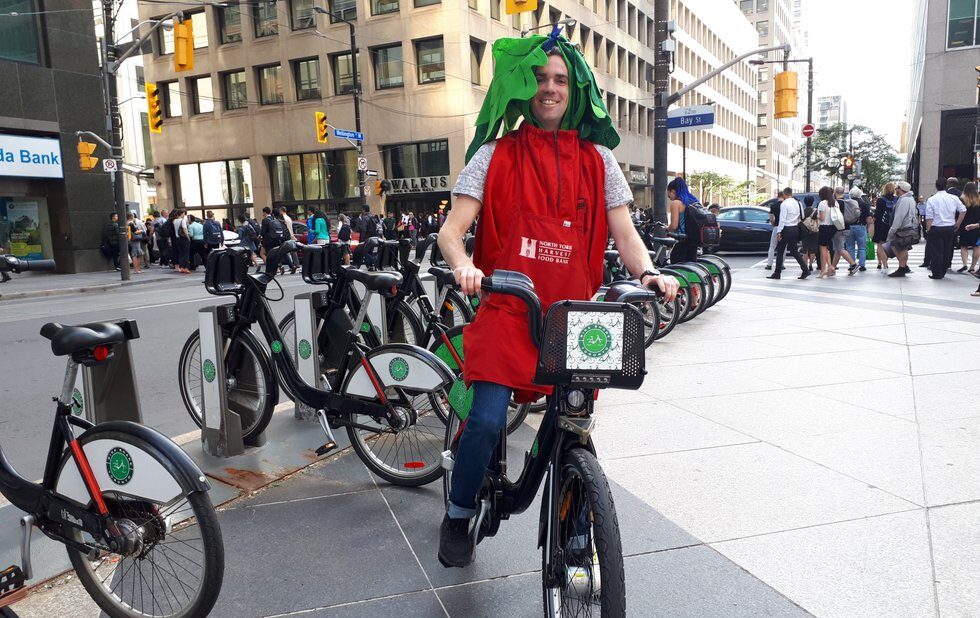 Josh Neubauer commutes in the custom radish suit made by his mother-in-law.

For the past week, Josh Neubauer has worn a custom radish suit, which his mother-in-law made for him, on his two-hour commute to and from work. He was a bit embarrassed to wear it in the beginning, but his cause is a good one.

Calling himself the Radish Commuter, the urban planner is raising money for North York Harvest Food Bank, where he serves as board chair, while calling attention to food insecurity in the city’s inner suburbs. For every $1,000 raised, Neubauer will do one daily commute dressed as the spicy root vegetable.

He’s launched a crowdfunding campaign and has already doubled his initial $2,000 goal in a single day, which means he’s committed to at least four days of radish routes. Encouraged by his success, he’s aiming to get enough donations to reach two weeks of commutes and is game for even more.

Living in Toronto is a different experience for those living downtown versus those in the inner suburbs. In the face of increasing equity gaps, Neubauer is helping North York Harvest raise awareness and ensure that food access is for everyone.

How did you come up with the idea to commute as a radish?

I recently moved to Hamilton. I thought, I’m spending all this time commuting to Toronto, how can I use it to encourage my friends and family and the people around me to donate to North York Harvest, and how can I make it fun and silly? I thought of this idea, and felt it might encourage people to give if they knew I was putting myself out there.

I wanted a vegetable because it’s healthy, and I wanted something big and goofy that would get noticed. I thought the radish was a little more ridiculous than your standard carrot. I like the idea of a radish being the same root word as radical. Doing radical stuff and having roots in the community is what North York Harvest is all about.

Were any other vegetables close contenders?

I considered asparagus briefly but I thought it was maybe too tall. I kind of thought of a tomato for a while, so I would take a lot of space and people couldn’t ignore me. But then I thought that’d be inconsiderate for the people on the train with me.

What have the reactions from people on transit been?

It’s been pretty muted. I expected at least some dirty looks if not some friendly hellos and some questions. But you know GTA commuters, we just get in our zone. Some people don’t even make eye contact. I’ve got some smiles, and I’ve had a few people say hi. I’ve had some people shout from cars. Maybe I need to put myself out there a bit more.

A lot of children don’t like radishes. Have you frightened any kids in that suit?

No. I saw some pretty confused kids outside Union Station this morning. But you’re right. Maybe I should have picked a more child-friendly vegetable. 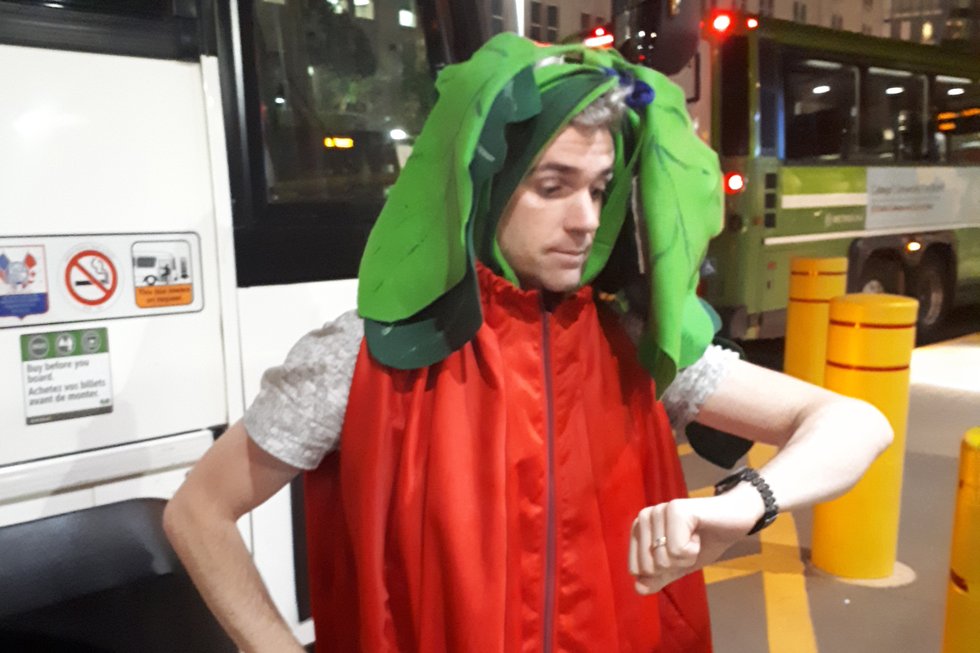 You posted a radish fact on your Instagram. Have you been getting into character by researching radishes?

I’m getting there. I feel the radish persona is starting to take over a bit. It took a little to warm up to it, but I feel myself getting spicier by the hour.

My favorite one so far is that radishes are so stinky they actually deter pests. I also found out that European explorers in the 1500s routinely wrote about finding hundred pound radishes. Those aren’t around anymore. I don’t know why, but maybe I’m bringing that back. Maybe I’m the reincarnation of those original, giant radishes.

Do you keep the suit on at work?

It’s mainly for the commute. The radish suit is wonderful but it doesn’t breathe. I get to the office and by the time I climb the stairs, I’m pretty sweaty. I try to keep it on for a while to make sure everyone knows I’m doing it. Then I have to take it off and hang it up for the day, because otherwise I might expire.

What do you want Torontonians to know that they may not know about how food insecurity impacts the city?

The issue of food insecurity, particularly in the inner suburbs, is getting worse rather than better, even in a time of real affluence in Toronto. North York, Etobicoke and Scarborough are increasingly the places where people first arrive to Toronto and to Canada, and the need for food banks has been increasing year over year since 2008. We saw food bank need increase by 13 per cent between 2016 and 2017.

We have a lot of community support for the food bank but it tends to be in the wintertime. Thanksgiving and Christmas are when we get the most support. The summertime is where we really need to keep the momentum up because the reserves get low. So we’re reaching out right now to as many people as we can to remind them that the need continues and that people are struggling to get food on the table in the summer too.