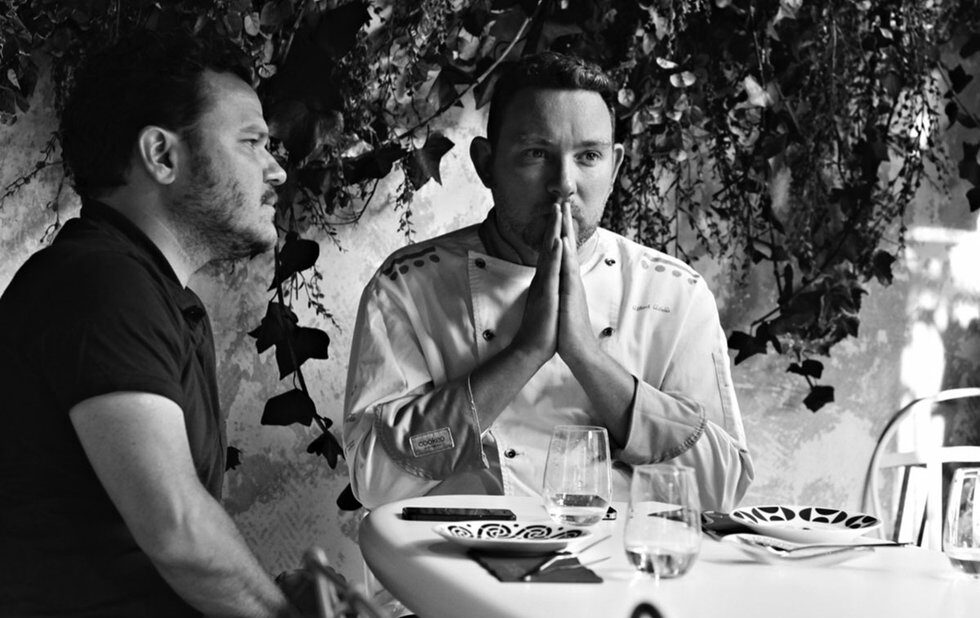 The restaurant slow season – for some chefs it means a well-deserved vacation. For Rob Bragagnolo it means pulling 12-hour shifts in one of the busiest – and best-regarded – kitchens in the world.

This summer, Bragagnolo, of Carver and Marben fame, is set to open an as-yet-unnamed Spanish food hall at King and Spadina. To hone his skills and pick up some inspiration before opening day, the chef decamped to Barcelona for the month of February for a stage at Tickets, Ferran and Albert Adrià’s world-renowned tapas bar. The fanciful, circus-inspired eatery, a follow-up to Ferran’s legendary El Bulli, opened in 2011 and remains one of the hottest you-know-whats in the world of food, coming in at #29 in the 2016 World’s 50 Best Restaurants list.

Bragagnolo had previously worked in kitchens in Spain for a decade, where he first met Ferran’s brother and co-restaurateur, Albert Adrià, and they stayed in touch.

“I reached out and asked him if it was okay to come there for a month. I found out later they usually do a minimum of six months, since it’s kind of a pain to have people going in and out all the time, so it was really nice of them.”

Though he was already a seasoned industry vet when he landed back in Barça, Bragagnolo’s mind was thoroughly blown by the pace and precision of the cramped, hectic Tickets kitchen, describing it as a “crazy, insane ballet every night.”

The restaurant releases reservations two months in advance, which get booked solid by diners from all over the world pretty much immediately.

“You open the doors, and all of a sudden 70 people sit down and you get orders, orders, orders coming in big waves,” he says. “It was awesome. I loved it. It was a rush.”

Since most of us will never get to eat there – much less get to put in time in the kitchen – we asked Bragagnolo to share a few of his takeaways from Tickets. 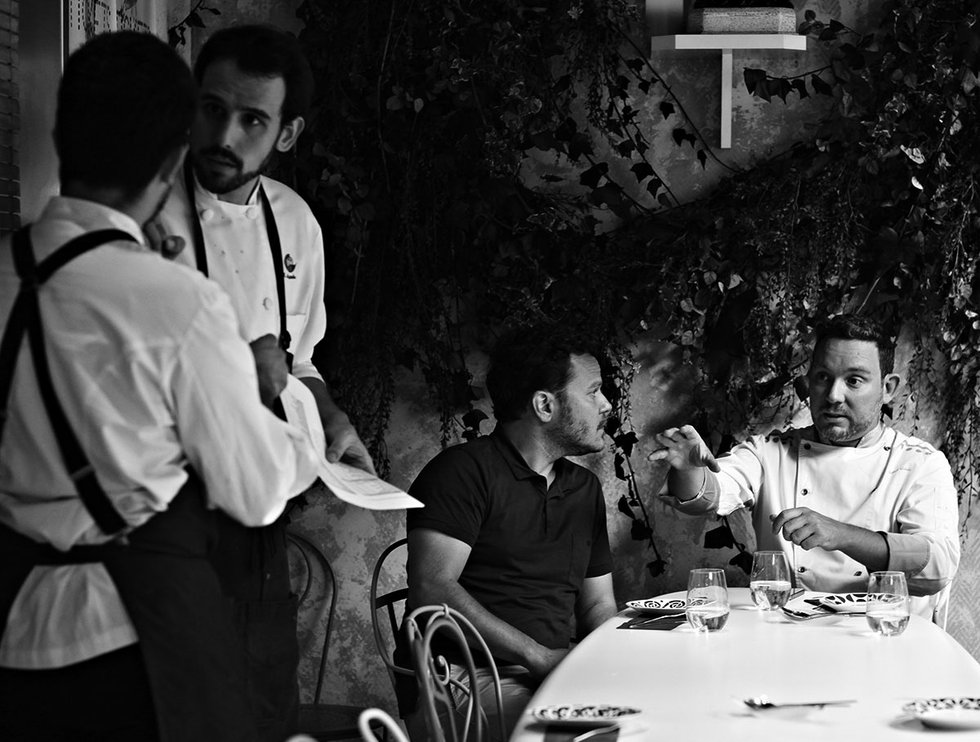 For one dish, cooks finely chop Catalan sausage and roll them into tiny, individual 15-gram balls. They shell and chop raw favas, then set them in a fava bean stock by the way, you also have to make fava bean stock.

“Then those fava beans and the little balls of Catalan sausage have to get pressed and formed into spheres, so you have a whole team of people forming them with tweezers. Then they have to get steamed. And then, when the dish gets ordered, you have to sear the sphere in a pan, serve it with a ham consommé that itself takes two days to make, plus little cubes of ham and leaves of mint – and that’s all set with tweezers. Everything’s very precise. If a leaf of mint is too big, if it’s not exactly in the centre, if the stock is not perfect or not the right temperature – you can’t serve it.”

Multiply that by a handful of dishes a head for 80 seats, six hours a night.

…But it’s not all molecular gastronomy.

Ferran Adrià made his name pioneering Wonka-ish creations like the “liquid olive,” a dome of pure olive juice held together by alginate and xanthan gum. They still serve it at Tickets as well as the Adriàs’ other restaurants, since demand was still raging after El Bulli’s closure.

But Bragagnolo bristles at the perception of the Adriàs’ cooking as “lab food.”

He notes that Tickets takes immense care with treating, cleaning and storing raw ingredients – something he wants to carry over to his new restaurant.

Every day starts with a general meeting with the entire kitchen staff, reviewing the previous day’s performance and what’s on the docket for that day.

“(The head chef) had a very detailed list of things that needed to be spoken about,” Bragagnolo says. “He might point out, ‘Hey, Jose, that sauce was too liquid we need to fix that.’ I would add this ingredient.”

If a cook needed closer instruction, he’d take time after the meeting to show them – no harsh words, unless a cook is obviously asleep at the wheel.

“There’s tons of communication like that, at all times. There are people who just started who were fresh out of school and had zero skills, but there was always a job for them. It’s a very learning-friendly environment, which was great.”

“The dish pit is tiny,” Bragagnolo says. “I don’t know how they can possibly wash all those dishes. If you eat dinner there, you’ll probably have 10 to 12 plates – so there’s all that cutlery, all those dishes, all those glasses. And then there are 30 people working in the kitchen, producing more dirty dishes. It’s bonkers.”

Everybody does grunt work.

“The kitchen might get a huge shipment of snow crabs, peas or artichokes, things that come in in big volume and require 20 people working for an hour solid to process,” he says. “Everyone works together, gets it over with and then you can move on to other jobs. That kind of helps morale, since you don’t have one person working for hours on these tasks.”

Everyone stops for a pre-service meal at around 4 o’clock generally, Bragagnolo says, it’s a “really nice home-cooked meal” like roasted chicken, potatoes and veggies (in short, the kind of thing cooks generally don’t have time to make at home).

“No one is allowed to go to family meal unless everybody’s finished, so if one person has tons of work to do, everybody helps to make sure that person finishes,” he says. “So if Mary has a bunch of fava beans to cut, it’s not like she’s left alone while everyone else is eating. There was a very strong sense of teamwork.

“They also leave sandwiches for everyone to take home at the end of the night, because they realize everybody’s tired and they probably have no time to eat something.”

Keep your head in the game.

In the kitchen, “there’s no music, talking, jibber-jabber about what you did last night, because the general attitude there is about focus,” Bragagnolo says. “And I didn’t even want to talk I didn’t want someone chatting my ear off beside me while I’m cleaning sea urchins with tiny tweezers. If you go just a millimetre off, you break it and ruin this beautiful, crazy-expensive product.”

There was no lingering after work for a drink either – not when everyone has to be back at work the next morning for another 12-hour day.

“I liked that aspect of it, too, because there was a lot of pride involved. Everyone has this common goal. Nobody’s complaining – ‘It’s too hot, it’s too small, the hours, my feet’ – it’s just what it is. We’re here to be one of the best restaurants in the world, and that’s it.

“It makes you feel very satisfied when you go home. You put your head down and you’re super-tired, but you’re like, ‘Oh, man, I work at Tickets. I work at one of the best restaurants in the world. I work with Albert Adrià.’ It’s rewarding.”