The 10 most exciting new bakeries in Toronto 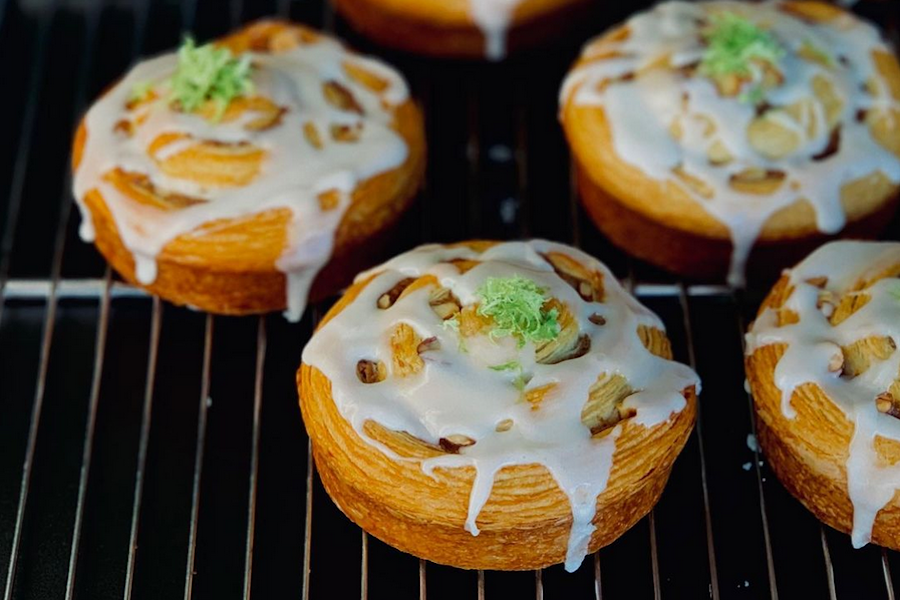 New kinds of Toronto bakeries have popped up throughout the pandemic. Out-of-work pastry chefs found themselves with free time and idle hands and got to baking a whole range of cakes, pies, breads and cookies and started selling them directly to consumers – with help from social media.

It helped that in the early stages of lockdown, many people were at home, bored and doom-scrolling anyway. Seeing an intricately designed cake or brightly-coloured pie crust could help fight off COVID blues. With a push towards doing-it-yourself and the need to make an income by any means necessary, many fledgling pandemic projects have turned into complete businesses.

There are also the non-professionals who rekindled a love of baking or who finally had the time to dream up their wildest creations. Either way, the majority of the new Toronto bakeries on this list don’t have brick-and-mortar locations. They get their goods to people primarily through deliveries, pop-ups and by partnering with establishments like coffee shops. There are, of course, a few bake shops on the list that you can visit in person but for many the overhead and rent is a lot to juggle when just starting out.

Here are the Toronto bakeries to know now, making some of the innovative desserts, pastries, cakes and breads.

Jill Barber opened her patisserie on College with a little (or a lot) of help from her friends last November. At first, she was baking everything herself but a peruse through her Instagram story highlights shows the place came together with a shoestring budget and lots of heavy lifting from her community. Currently open on weekends (with help from sous chef Emma Bristo-O’Connor), Barber’s sweet and savoury tarts, cookies, sausage rolls, lemon bichons and more regularly draw long lines. Barber studied in France and the influence is apparent: everything is oh-so-buttery, flakey and rich. The chocolate cookies more than pass the litmus test. There’s a rotating menu, with an emphasis on in seasonal produce – the current “spring tart” is made with Ontario peas, ricotta, spinach, wild foraged ramps, lemon zest and mint.

When Lucy Kirby returned to Toronto to start a new job in early 2020, she was blindsided (like the rest of us) by the pandemic. She launched Breadhead and it quickly took on a life of its own. She’s gone from baking in her small apartment and trading baked goods with other out-of-work pastry chefs to growing a following online and partnering with White Squirrel Coffee to sell cakes, sourdough bread, cookies and pastries. New drops happen on Monday and always sell out. Kirby does it all and she does it impeccably: the cakes are iced like oil paintings, the sourdough bread, bagels and donuts are impeccable and the peanut butter chocolate toffee cookies never fail to hit the spot.

Gluten, milk, gelatine-free, halal vegan cheesecakes sound like an impossibility. But the team behind CeaseCake has made them a reality. They do 16 different cheesecakes and have fun with flavours, from s’mores to coconut matcha to rice krispy, cornflakes and sweetened quinoa. CeaseCake is delivery and pick up-only for now and orders must be made in advance. Luckily, they deliver as far north as Richmond Hill, as far east as Oshawa and as far west as Hamilton. On top of a handmade and 100 per cent vegan star lineup, they do mini-cheesecakes, cinnamon rolls, cookies and custom orders. You won’t be missing dairy at all.

You have to line up to get your hands on the bacon butty from Emmer in Harbord Village.

The newest kid on the block, Emmer just had its soft opening last weekend but it’s been years in the making. In 2018, owner Philip Haddad began testing bread recipes, three years later and Emmer is finally here. It’s garnering a lot of warranted buzz because over the years, while getting the business off the ground, Haddad sold his baked goods and bread at Donna’s. Now that the shop is officially open it’ll be easier to get hands on the their bacon butties, breakfast sandwiches, croissants and loaves. The first weekend saw long lines down Harbord that are unlikely to subside anytime soon.

Kennedy Sherwood is a university student in her last year of undergrad who found herself with a lot of free time last year. Her varsity soccer season was on hiatus and she was let go from part-time jobs. All of a sudden, she had the time to bake again, something she’d adored when younger. Her family and friends soon fell in love with the cheesecake cookies she dreamt up and persuaded her to sell them online. The business took off faster than expected: soon she was selling 300 cookies per weekend and driving all over the GTA to fulfill deliveries. Since launching with her OG flavours, raspberry, blueberry, cinnamon bun and Turtles, Sherwood has added new items like chocolate chunk tahini cookies and blackberry cheesecake bars.

Shannon Nocos‘ cake and pastry business has lived many lives throughout its year-long existence. From a short-lived meal-delivery program last summer to offering small baked goods like empanadas, tarts and cookies, she finally landed on cakes. Drawing on her graphic design background, she uses colour theory and composition when icing her striking cakes. From piping bag pointillism to fondant pleats, her cakes are works of art. The first cake flavour, ube macapuno, was a nod to her Filipino heritage and she has a vested interest in partnering with other Filipino food businesses like Kuisinera, Bar’kada, Tala and more. Nocos does everything on her own from baking to the marketing and branding, packaging, social media and deliveries. For now, pre-orders are the only way to get your hands on her creations and bookings usually have to be made at least a month in advance.

The nama shokupan or cubed Japanese milk bread at La Petite Colline is unfathomably soft. The loaves are used to make all the toasted sandwiches – grilled pork loin, bbq ribeye and ham and cheese are just a taste – that this bakery at Steeles and Highway 400 prepares daily. Everything is made from scratch with all-natural ingredients at this Taiwanese fusion bakery. From baked scallion buns to thick loaves of breakfast toast (stuffed with ham and cheese and topped with slivered onions and melted cheese), it is indulgence in every bite. They serve baked goods I’ve never had elsewhere like mentaiko caviar baguettes and black sesame bread (made with an in-house paste). They’ve also got things on the sweet end covered with Longan honey bread, pineapple and red bean buns, cheesecakes and chocolate buns.

Chef Yoni Kamil’s “modern take on tradition” has paid off big time. The bakery’s Friday pop-ups have been satisfying Toronto’s challah and babka cravings since it launched in November. It’s all still very DIY – you’ll need to DM over Instagram to pre-order for pick-up near Bloor and Lansdowne on Fridays. The lineup ebbs and flows from time to time but there’s always a rye bread, two challah options and babka. Kamil has done classic chocolate (definitely a crowd favourite), chocolate with tahini and even sticky cinnamon babka throughout the many iterations. The classic chocolate is made with dark chocolate ganache, milk chocolate chunks and orange zest. Every moment, from laying your eyes on it to finishing the last crumb is rich and decadent. The business has been steady and they’ve recently partnered with shops in Toronto and Hamilton now stocking Lev Bakery products.

If you want unexpected flavour mashups and cakes that look too good to eat, Reverie is the best kept secret you should know about. Michelle Ashurov’s creations feel particularly personal, perhaps because whenever she posts images of her cakes, she tenderly shouts out the recipients. Her whimical cakes all look straight out of a fairy tale, but one that’s a bit topsy-turvy – more Alice in Wonderland than Cinderella. Ashurov divides the menu into two texture categories: cakes like silk and cakes like diamonds. The silk variety includes the pistachio pamplemoussier, a stunning number made with grapefruit genoise sponge cake, grapefruit and orange blossom curd and pistachio mousseline cream. The top is finished like a pink and green geode. Orders are done through email and it’s pick up only. These are definitely special occasion desserts.

A post shared by The New Pie company (@newpieco)

Tie-dye pie crust. Need I say more? These pies by Shiela Labao and Miguel Hernandezare are an absolute blast to look at and even more fun to devour. The New Pie Co. started with a pie giveaway in late March to get the word out about the new business and that ended up catapulting their follower count. They release new drops every Sunday and, like many other online bakeries on this list, it’s a Herculean feat to pre-order in time. Once they sold out in two minutes. They’ve transformed childhood favourites into pie – think peanut butter and jelly with a thick layer of peanut butter mousse topped with strawberry coulis and meringue. The birthday cake pie (pictured above) is making a resurgence for all the June babies and it’s made with a lemon zest funfetti butter crust, vanilla bean custard filling and topped with toasted raspberry meringue. They also started offering online pie making workshops in April.