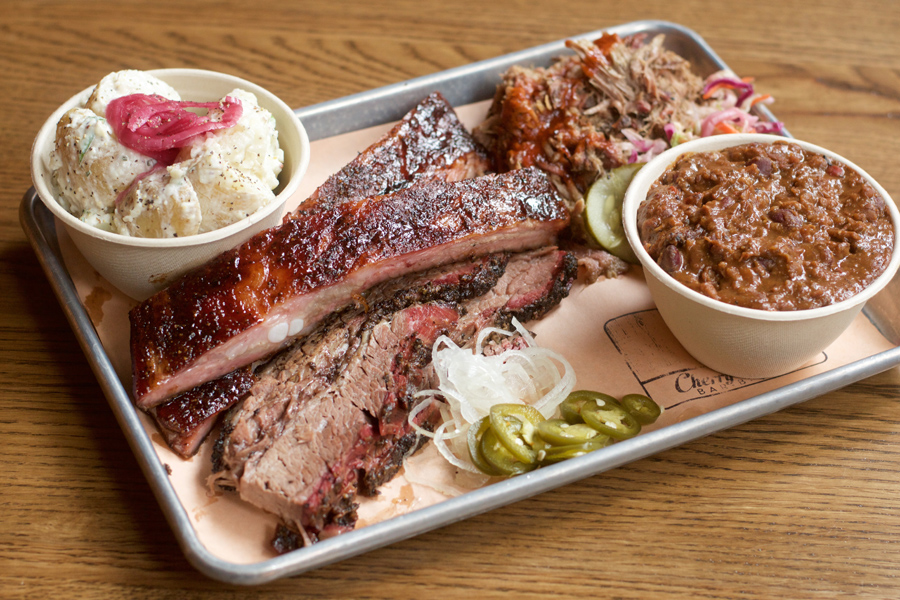 Out in the Upper Beaches, pitmaster Trevor David marinates meats – from chicken and pork butt to beef short rib, cornish hen and quail – in a brine with secret spices for a full 72 hours before smoking them on applewood, cherry, hickory or pimento. He’ll even do game meats or wagyu beef by special advance order. 2478 Kingston, 647-715-6216, artofbbq.ca

One of the longest-running BBQ restaurants in Toronto, this laid-back, family-friendly spot on Roncy prides itself on from-scratch cooking, with classics like brisket and pulled pork alongside novel dishes like pomegranate-molasses pulled lamb, plus some of the best wings in town. Stock up on housemade sauces and spice rubs for your own at-home BBQ adventures.
299 Roncesvalles, 416-532-7700, barque.ca

Since opening its first location on Main in 2018, Beach Hill already has a die-hard east-end following for Central Texas-style meats like brisket, burnt ends (which appear as a semi-regular special) and smoked chicken, which has a habit of selling out in the middle of dinner service. A recently opened second location at Chester and Danforth doubles the goodness. 172 Main, 429 Danforth, beachhillsmokehouse.com

Breakwall’s menu is built around locally sourced Ontario meats, including hickory-smoked brisket and pork ribs done over hickory and applewood. Also available: Wings tossed in a 10-spice rub and your choice of a dozen sauces, plus a whole whack of lowbrow-yet-crowd-pleasing “snackatizers” like “sleazy bread” topped with smoked brisket, crumbled bacon and cheese. You’re a loose cannon, Breakwall, but you get the job done. 1910 Queen East, 416-699-4000, breakwallbbq.com

No, your eyes aren’t playing tricks on you: Anthony Rose’s backyard BBQ paradise – previously shuttered along with big sib Rose & Sons – is back in our hour of need. Rose is once again doing ribs, chicken and sides out of the back of 164 Dupont; you can get it hot off the grill (to go or on the patio), cooked and ready to reheat, or raw and pre-seasoned for all you amateur pitmasters. 176 Dupont, 647-342-0356, roseandsonsbigcrow.com

This BBQ biz, which began as a food truck, has been a Beaches staple for almost a decade. All your meaty faves are accounted for, along with fried chicken, a beloved grilled cheese sandwich and no fewer than 11 sides – but it’s the burnt ends, smothered in housemade blueberry and blackberry sauce, that get the phones lighting up well before service. 1959 Queen East, hogtownsmoke.ca

The R2D2 smoker out front might be what gets people in the door, but this Danforth smokehouse sets itself apart with a focus on locally raised meats (even the oak and maple it’s smoked on is local) and actual, honest-to-goodness vegan options like the Firecracker Po’boy made with fried tofu tossed in Louisiana hot sauce. 673 Danforth, greenwoodsmokehouse.com

A gas station making some of Toronto’s best BBQ? That’s nothing new for Leslieville denizens, who have been stopping by the Pumps for delicious, inexpensive BBQ sandwiches and sides for years. Brisket and pulled pork sandwiches still ring in at about $10 here, along with loaded poutine and sides like fried pickles. After hours, the menu switches over to a late-night curry. 929 Queen East, 416-465-1313, leslievillepumps.com

Originally based out of Pickering, this quick-service BBQ shack has quietly been gathering a steady fan base since 2015. Comparatively low prices (at least, by downtown BBQ standards), and proximity to the University of Toronto make this a student favourite, but the fast service and simple, satisfying recipes please diners of all stripes. 650 Spadina, 416-792-6120, facebook.com/pigoutbbqspadina

The fuel for many a Trinity Bellwoods takeout picnic, Smoque n Bones mixes and matches BBQ styles from Memphis, Texas, the Carolinas and Kansas (with a little bit of Toronto flair). As a result, you get everything from rib tips (fried or non-fried, in a variety of sauces) to peppercorn beef, chorizo and fennel sausages. Bonus: A massive bourbon collection.
869 Queen West, 647-341-5730, smoquenbones.com

This decade-old St. Clair West spot is known for a whole whack of different dishes, from burgers to brunch to fried chicken, but the BBQ deserves a mention. The pulled pork, slow-smoked over apple wood, is a favourite, but the brisket with house BBQ sauce deserves a mention, too. Wash it all down with a fresh limeade. 699 St. Clair West, 416-658-9666, thestockyards.ca

11 responses to “The best BBQ restaurants in Toronto”