East End Under the Dickensian shadow of. 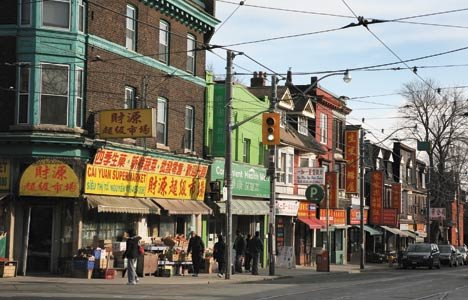 Under the Dickensian shadow of the Don Jail, Gerrard and Broadview’s sleepy Chinatown East may be considerably smaller than its west-side cousin, but its rewards are just as big. But first, you’ll have to find them.

Sleepy Fu Yao (643 Gerrard East) may lack the frenzied atmosphere of Hua Sheng and its bizarro public address system, but its selection of Chinese greens, sauces and noodles impresses. A few doors over, Bill’s Lobster (599 Gerrard East) is the spot for all manner of crustaceans and sushi-quality fish.

And where else other than Ken’s Fresh Poultry (339 Broadview) can you buy brown chickens alongside lush tropical plants? Not in Chinatown West. And while its no Tap Phong, Mei King Company (337 Broadview) next door has everything you’ll need to cook them. Excepting the dieffenbachia, of course.

Since Co Yen closed on Spadina, frugal foodies have been flocking to Rose Café (324 Broadview) for the best $2 Saigon subs in town – another point for the east. The truly cash-strapped go for pho at quirky Que Ling (248 Boulton), a Vietnamese hole-in-the-wall located in a small house just south of the main drag.

Though the ‘cue has been inconsistent of late at Hong Fatt, Ka Ka Lucky’s (349 Broadview) barbecued pork and duck are always remarkably moist of flesh and brittle of skin. And don’t forget that the dim sum carts run till 3 am every night at the recently redecorated Pearl Court (633 Gerrard East). Beat that, Bright Pearl!

Ten times the size of its counterpart at Gerrard and Broadview, Chinatown moves at a frantic pace.

Stocked with just about everything you’ll need for a quick DIY stir-fry, Hua Sheng (293 Spadina) is by far the most organized and easy to navigate of the four Asian supermarkets on the strip, even if the checkouts can be pure pandemonium. If crowds aren’t your thing, little-known Kensington Poultry (578 Dundas West) makes buying fresh roasting chickens or buck-a-bag soup bones a breeze. Up the street, the Fong On Food (46 Kensington) tofu factory sells bean curd by the bucket.

Supper supplies in hand, head over to Tap Phong Trading (360 Spadina) for aisles and aisles of restaurant-quality woks, cleavers and tableware.

All that shopping builds an appetite! From early morning, Bright Pearl (346-348 Spadina) is as crowded as the Spadina streetcar for dim sum cart service. Up the avenue, Mother’s Dumplings (421 Spadina) has been a zoo since it moved to much bigger digs last month and often sells out before last call. Massive bowls of egg noodles in broth topped with barbecued pork and steamed greens cause lineups at King’s Noodle (296 Spadina), while student-friendly Kom Jug Yuen (371 Spadina) has been drawing them in since the draft-dodging 60s for cheap fried rice and old-school egg rolls.

So what if there’s nowhere to park? Once the bars close, club kids cab it to Swatow (309 Spadina) for its signature spicy fried noodles, while pho aficionados get their fill at Pho Pasteur (525 Dundas West) 24 hours a day.