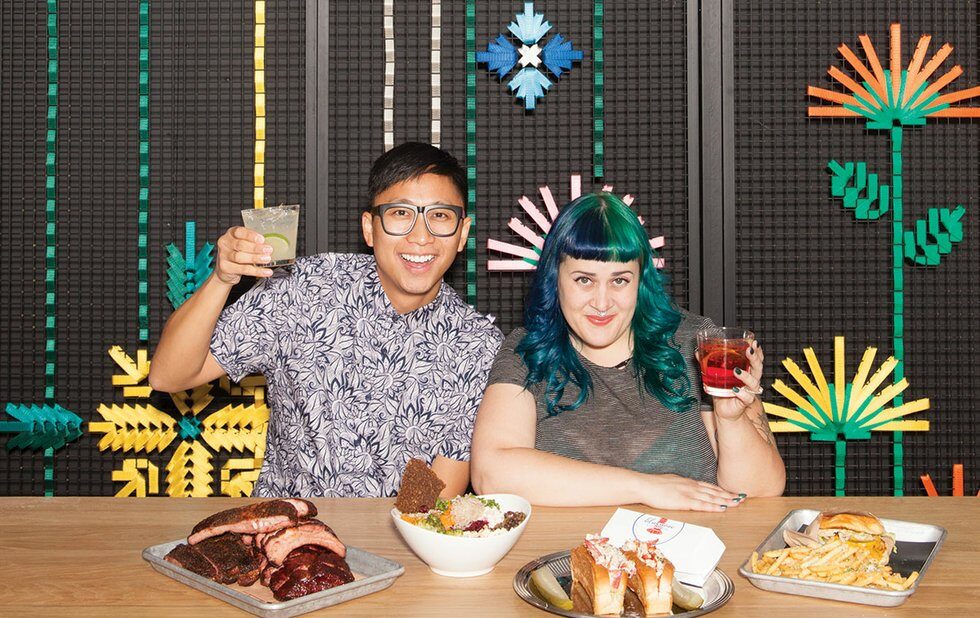 Toronto’s biggest new patio (spanning an impressive 4,000 square feet) is also one of its most gloriously accessible: Instead of being at the mercy of a harried host or queueing in the scorching sun for two hours, just roll in and pull up a chair. Just like inside the 18-restaurant chef’s hall, seating is self-serve – but unlike inside, the patio has a bar converted from an Airstream trailer, string lights and a geometric paint job that looks like the basketball court of a third-grader’s Kool-Aid fuelled daydreams. And what’s that? A second terrace at the back? This place really does have everything. 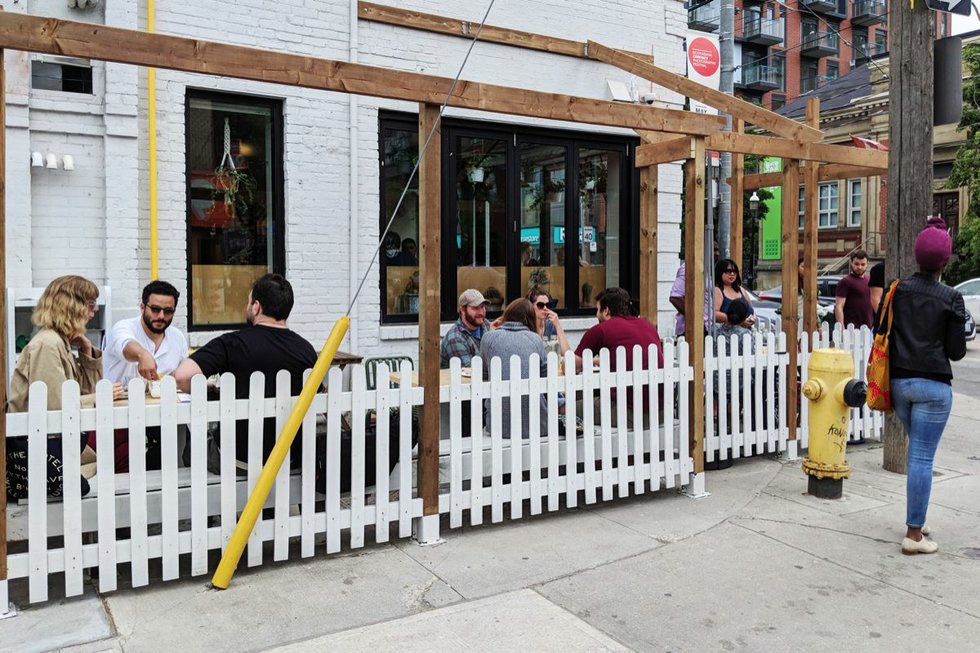 Slap on some plant-based SPF and root yourself on the white-picketed patio at Queen West’s latest vegan joint. (In case you hadn’t heard, Vegandale is spreading eastward.) Unlike most of its peers, Hello 123 doesn’t push junky meat substitutes as a questionable selling point, though obviously veggie burgers (mounded with kimchi!) are available. Fresh and flavourful dishes like chili- and cumin-spiced sweet potato noodles and stuff-your-own lettuce wraps are made for outdoor dining and aggressive geotagging. If you’re thirsty post-berry-speckled smoothie bowl, work on your freckles over a few pints of Blood Brothers Shumei or a round of tequila-spiked kombucha cocktails. 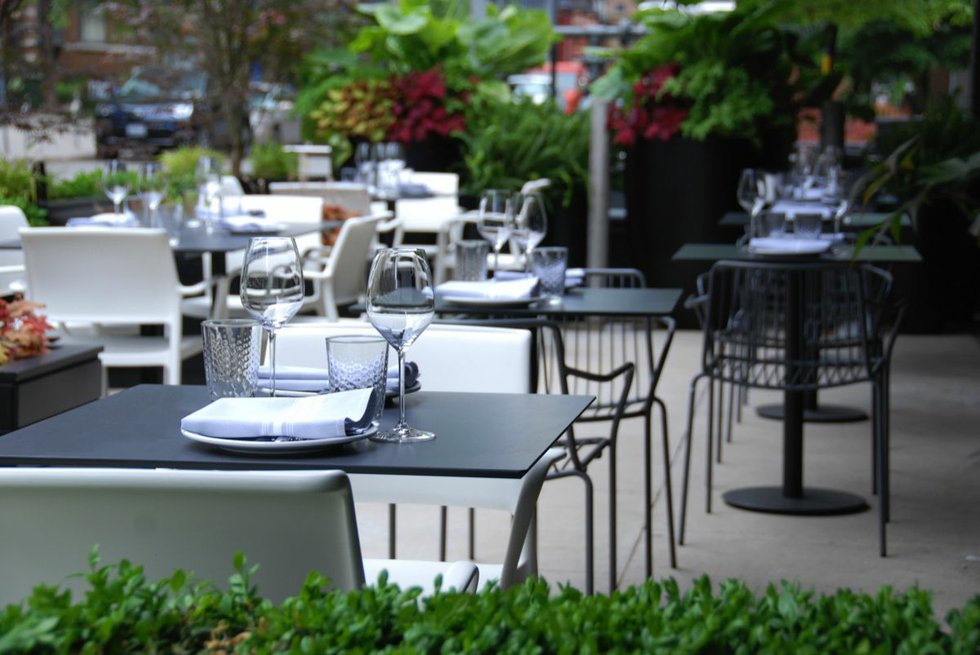 The swank, clubby lobby lounge at the Anndore House hotel deserves an equally luxe patio. The Anndore’s brand-new front terrace delivers in spades with navy-hued planter boxes, modern chairs and fronds of ferns overhead. It also doubles the patio for Craig Harding’s latest outing, Constantine — meaning you can avail yourself of an entire subcontinent’s worth of Mediterranean eats like wood-fired pizzas and lamb burgers, plus inventive cocktails from the lobby bar. 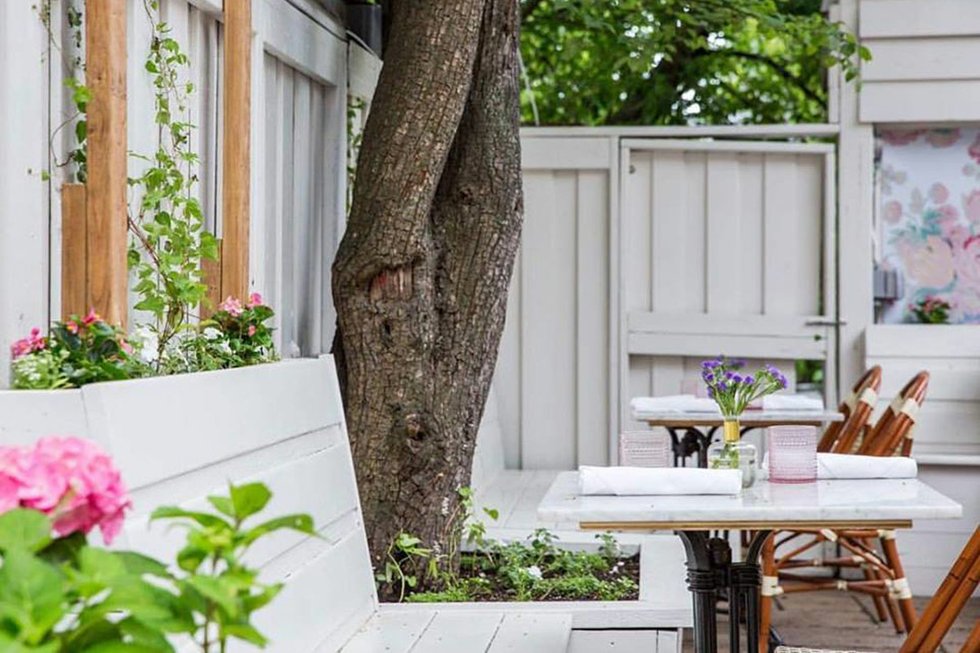 Victor Barry’s Harbord bistro is a perfect pastel dream, and its 30-seat back patio ticks off all the expected boxes: Floral-print mural? Check. Fairy lights? Check. Wicker bistro chairs? Mais oui. Whether you’re indulging in a leisurely weekend brunch, a hearty dinner of rabbit and foie, or late-night cocktails and some petits plats, you’ll be living la vie en rose. 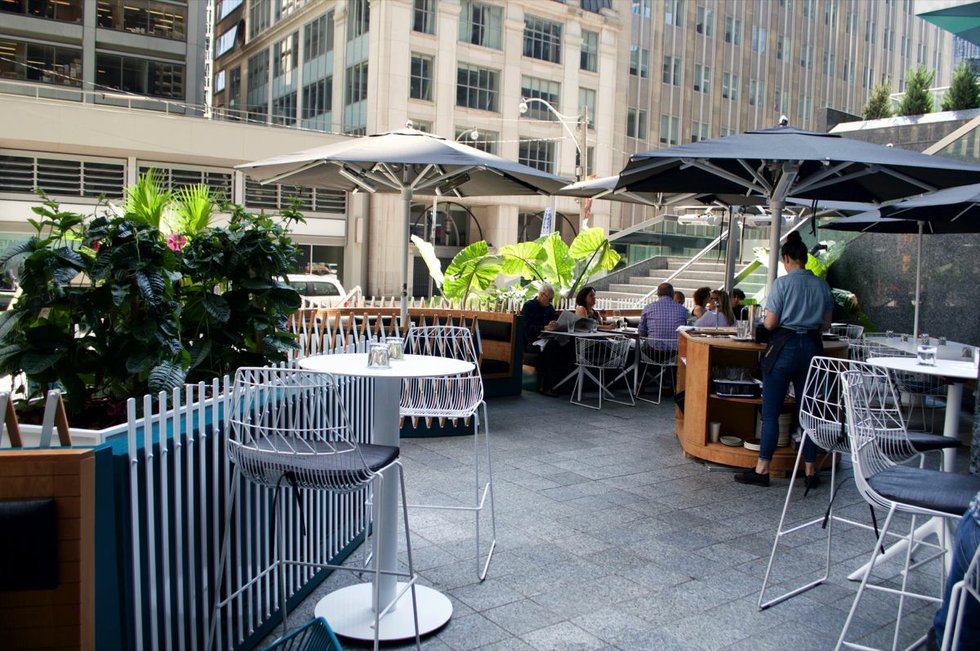 The Financial District feels like a soulless expanse of concrete and marble – so we have no doubt that the sunny outdoor terrace at the Drake’s latest, which comes decked out with plenty of greenery and an honest-to-goodness waterfall, will be one hot slice of real estate this season. And though it may not seem as appealing during these bright, sunshiny days, we’ll be grateful for the indoor “patio” space – decked out in the same teal-blue banquettes and festive palm fronds and topped with a geometric wooden pergola – once there’s a foot of snow outside. 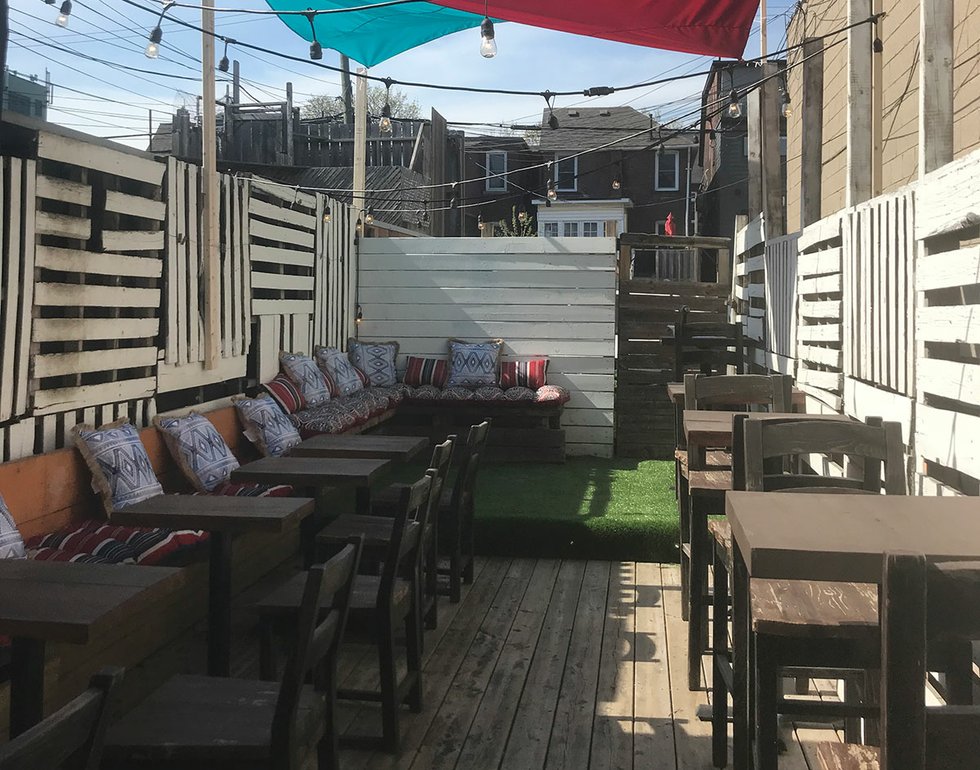 Raca Cafe and Bar’s loss was Dumbo Snack Bar’s gain. The cozy back patio at what was once Ivana Raca’s first solo outing as a chef is now, in the hands of proprietor Nick Peach, a full-blown party spot complete with fire pit, pop-up bar and a jam-packed events calendar (including movie screenings and silent disco nights). Your best bet for drinks: Teapot cocktails, served in oddball vintage pots sourced from the restaurant’s patrons, which are potent enough to make even an elephant feel like it’s flying. Oh, and the kitchen’s open until 2 am! 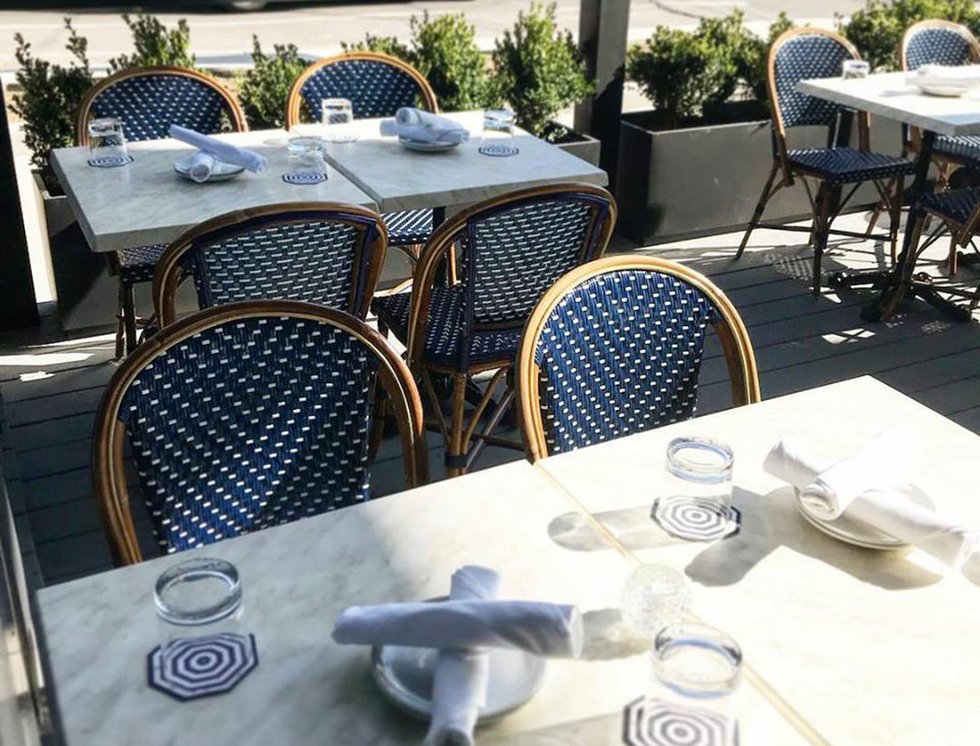 Is the scene too crowded at the Broadview Hotel? Luckily, this under-the-radar brasserie (by Table 17, the same folks who headed up the food program at the Broadview) is just a few minutes away at Queen and Carlaw. From lunch till late night, you can sink into a handsome blue-cane bistro chair and enjoy an aperitif or a Saulter Street pilsner brewed a few blocks away. And if you’re taking in a show at the adjoining Crow’s Theatre, you can avail yourself of a $36 prix fixe. 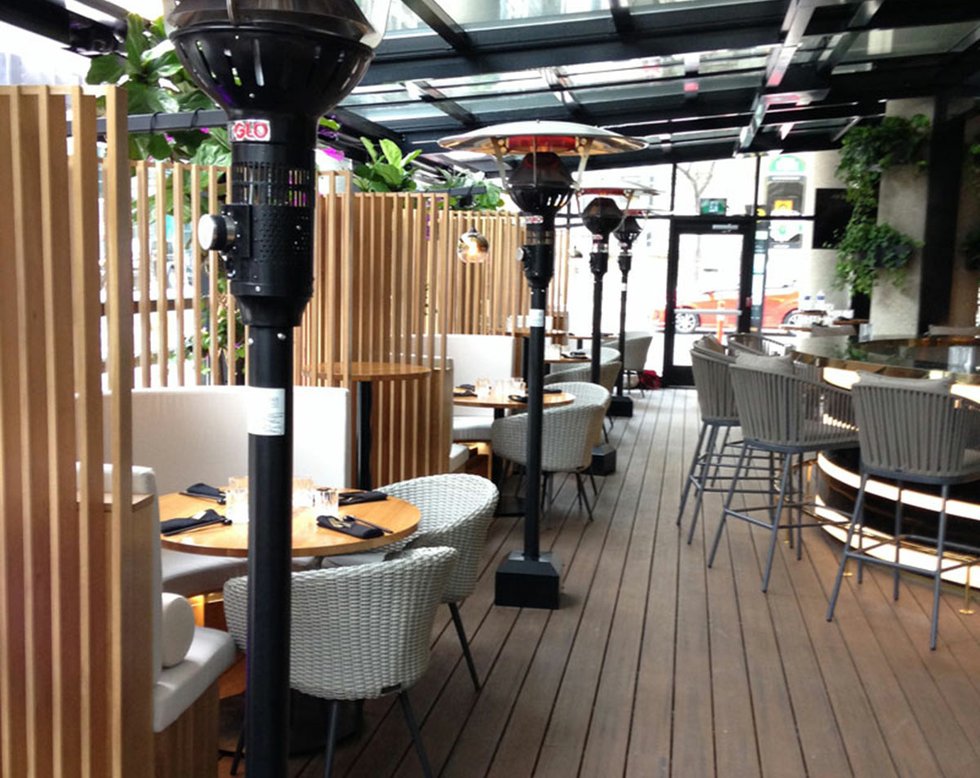 The bottle-service and bodycon-dress set will spend the summer flocking to this Drake-owned sushi bar and club on Yonge. Drizzy connection aside, the adjoining 2,100-square-foot patio – hemmed in by a fully motorized, retractable glass enclosure – makes for another compelling reason to check the place out. As you might expect from a place with OVO money behind it, the space is fully kitted out with cushy booths, heat lamps and a giant golden “6” logo (all the better to rub in your Insta followers’ faces). 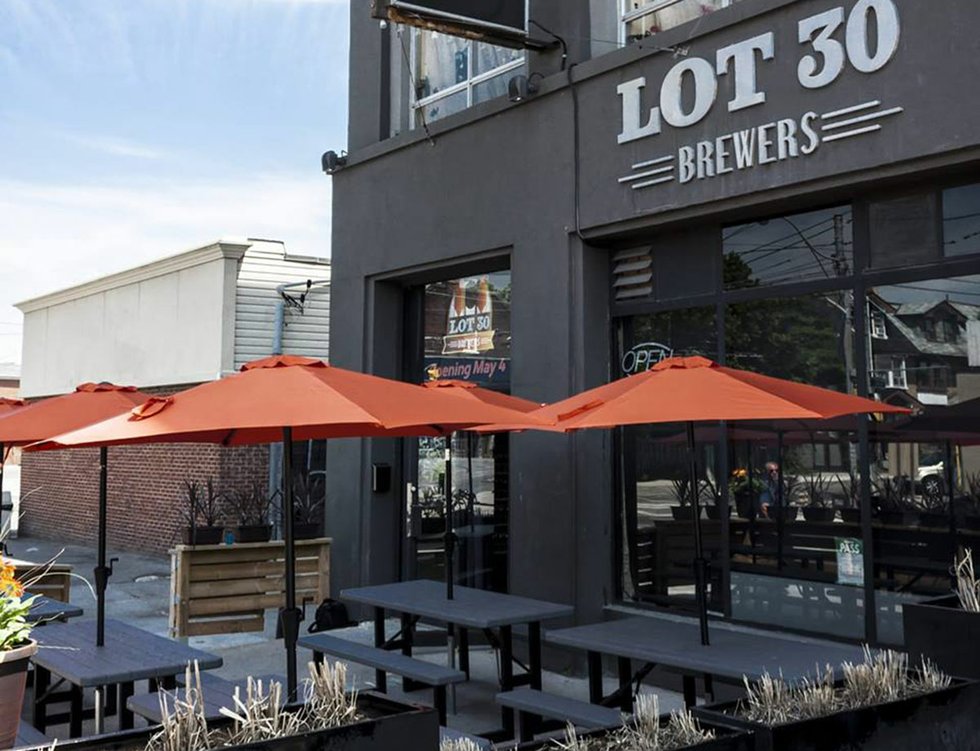 From the ashes of Lansdowne Brewery (which sadly never brewed a single on-site beer due to licensing issues) ascends Lot 30, replete with a sun-drenched 36-seat front patio. Stake out a spot at one of five communal tables and sample your way through all of Lot 30’s brews (of which there are nine, give or take, brewed in house). New releases, like a NEIPA hopped with Simcoe and Mosaic and upcoming strawberry kiwi and boysenberry sours, are made to guzzle sleeveless and behind polarized shades. July will mark the roll-out of a hilarious series of beers based on retro cocktails. First up is a piña colada brew, obviously. 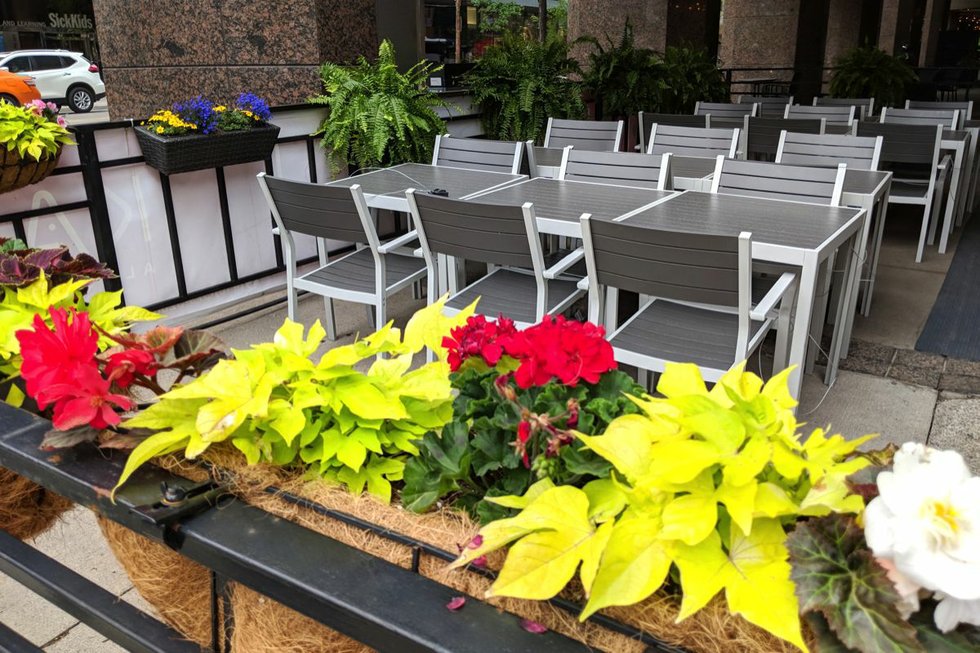 Kaka All You Can Eat

Long a smash hit in its native Markham, this sushi joint (the name supposedly refers to a rare breed of Japanese flower) brought the excitement downtown over the winter, along with an expansive menu of gorgeously-plated traditional rolls, aburi-style torched sushi and impressive apps. With the addition of a 30-seat patio, you can enjoy it all al fresco – along with a summer drinks lineup that includes a sangria with dry ice and edible flowers or a rum-spiked mango slush. Kanpai! 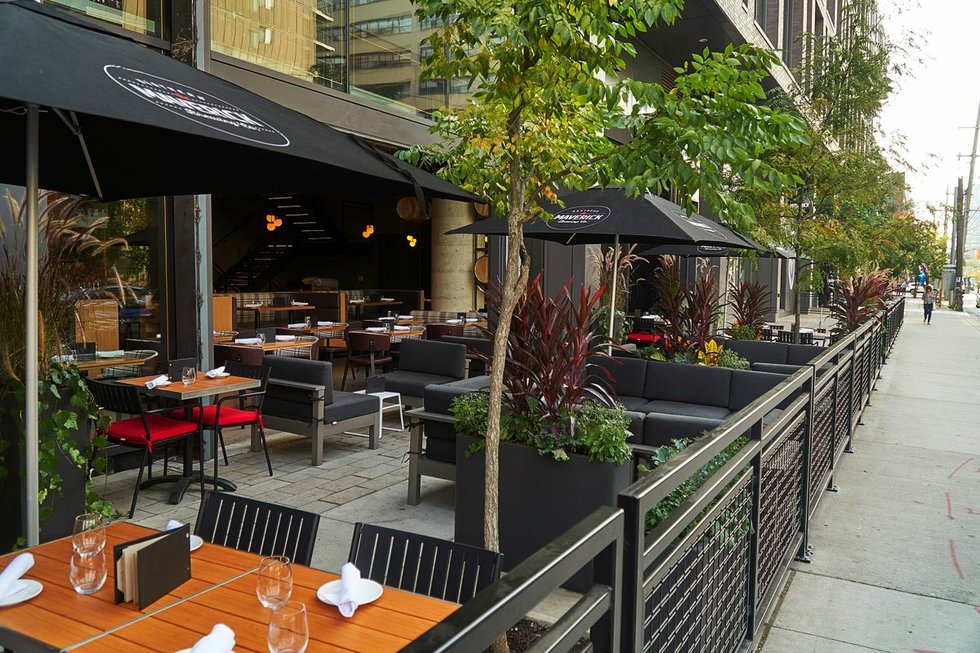 If you missed checking out the sizeable patio at this King West-adjacent beer hall when it opened at the tail end of last year’s patio season, now’s the time. Maverick’s front terrace boasts 100 seats of prime beer-drinking real estate, perfect for kicking back with a flight or three of suds from their broad in-house brewing program and some eats from ex-Cowbell chef Mark Cutrara. In case you somehow can’t snag a spot, the restaurant’s floor-to-ceiling windows open for an inside-out feel. 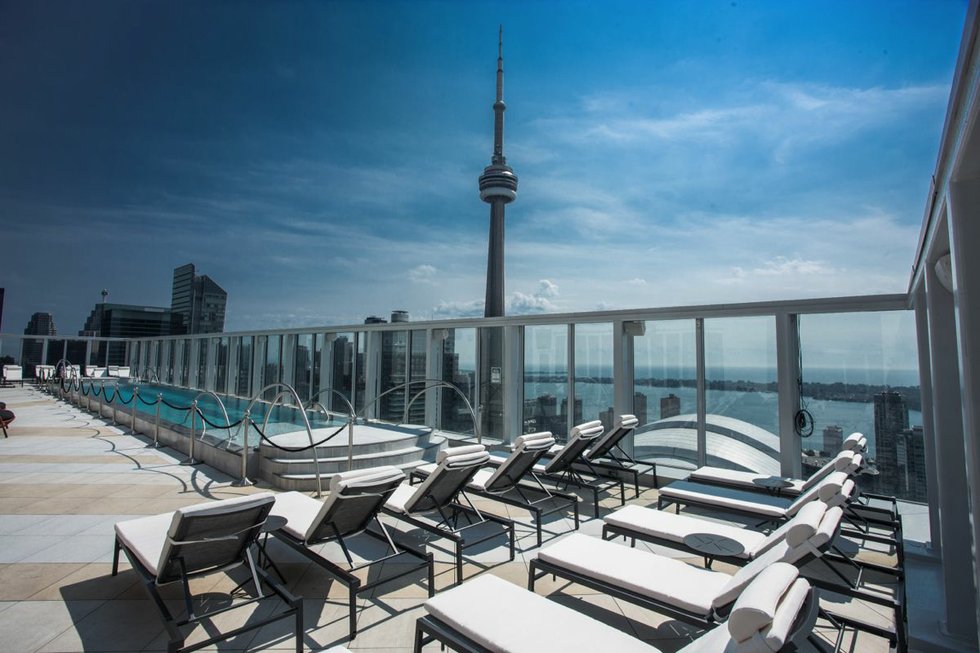 With its all-white patio sets and stunning 44th story views of Lake Ontario and beyond, Kost, which holds court on the roof of the new and ritzy Bisha Hotel, channels Baja-California by way of the corporate north. Like most panoramic poolside real estate atop lavish lodging, Kost isn’t a spot to hit on a budget – margaritas and spruced up G&Ts run a cool $16 and $17, respectively. But if you’re living that black-Amex life, please direct your attention to the Krug Grand Cuvée on the champagne list and note that I’m free to hang next Friday. 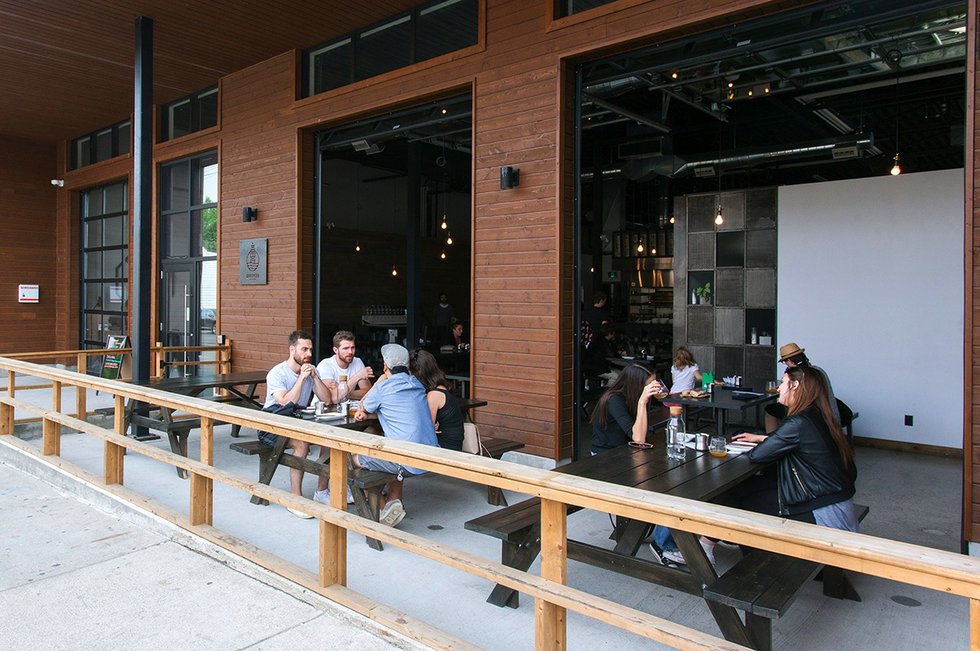 Did you know that one of Toronto’s most esteemed east-end breweries has a patio? Godspeed’s little patch of sunshine popped up in July last year, but that hardly counts considering that “summer” 2017 didn’t manifest until late September. Squeeze in beside strangers at one of three picnic tables and soon you’ll be clinking glasses of yuzu saison and hand-feeding each other karaage like old pals. Save a trio of flagship brews, Godspeed’s beers are single-batch releases, so consider blocking off Saturday afternoons for the entirety of July to become a semi-permanent patio fixture. 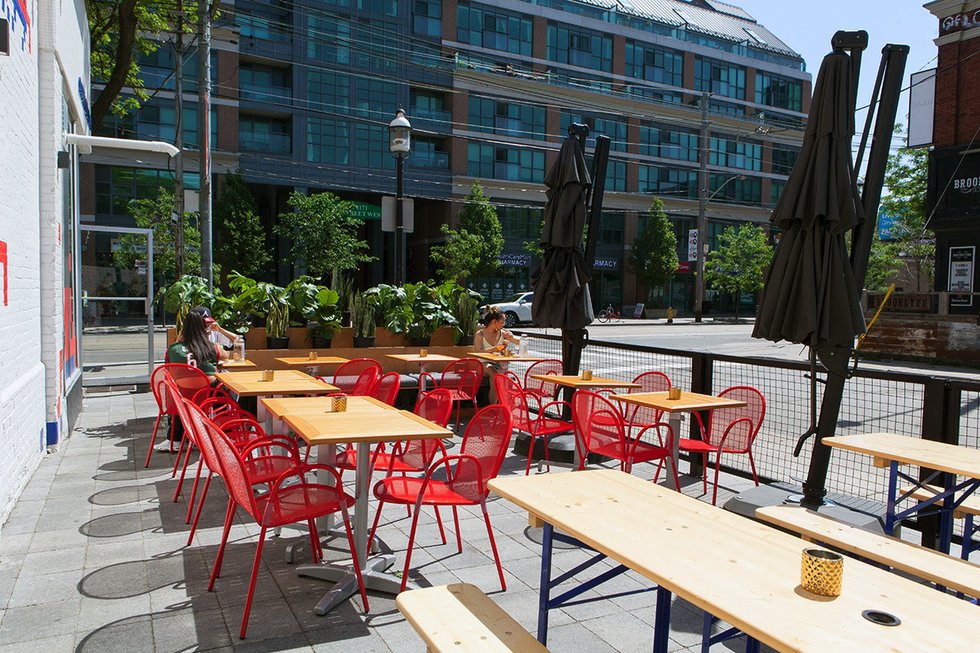 For a flagrant novelty bar with Space Invaders splattered all over its façade, Convenience has a comparatively subtle patio. With pops of primary colour – red chairs, yellow umbrellas, royal azure table legs – and a low wall of plants that curbs Queen West foot traffic from leering too intensely, it’s a dandy little spot to crush a frosty beer on a sweltering afternoon. But be warned: casual beers can easily tip into lit once your bad-influence friend discovers that cocktails on tap (Negronis, cosmos, Paper Planes) are a measly five bucks.