You might have seen Tiny Mile's Geoffrey robots out delivering food with Uber Eats – but what do they mean for gig workers? 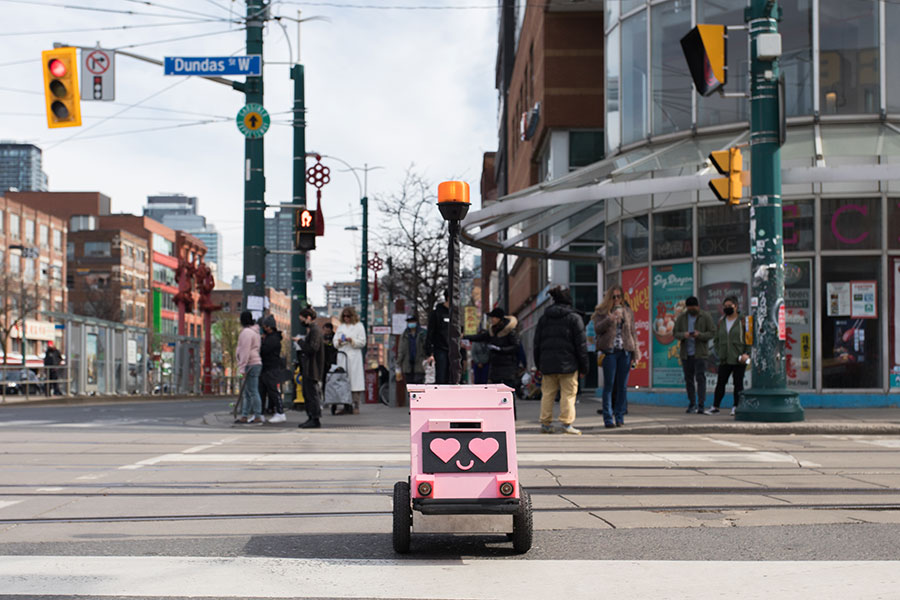 Toronto is overrun with pink robots.

Well, maybe not overrun – there are only about seven or eight wheeling around on any given day. But spotting one of them is like seeing a celebrity at TIFF. Those almost self-consciously cute pink robots are all over Instagram and TikTok.

The robots are named Geoffrey, and they belong to a local startup called Tiny Mile. They’re there to get your food, picking up and delivering orders on Uber Eats.

They’re not programmed to destroy us – or take our jobs. But they couldn’t have arrived during a more tumultuous year for food delivery.

The pandemic has increased our reliance on gig workers picking up and delivering orders. Restaurants have become even more entangled with tech companies like Uber and the sizable commissions they take. Workers, now deemed “essential,” have been exposed to a whole menu of labour issues – lack of job security and benefits, nebulous and non-transparent wages, misclassification of workers as independent contractors rather than employees and even pandemic pay cuts.

You’d think adding robots into that already combustible atmosphere could cause a battle, but it’s been surprisingly smooth. Rather than fear or anger, Geoffrey the delivery robot has been embraced with glee – or at most confusion. When you see one rolling down the street, you’ll often see a person following behind it with a phone camera.

“People get so excited when they see the robot is delivering their order,” says Tanya Spasic, chef and founder of Animal Liberation Kitchen. “Sometimes it’s not even about the food. They just want to order and say hi to Geoffrey.”

Animal Liberation Kitchen was one of the first restaurants to sign on with Tiny Mile and it’s one of about eight restaurants actively partnered with the company.

Tiny Mile was officially founded in November 2019, not long before the pandemic closed restaurants all over the city. They didn’t know at the time how reliant we’d all become on delivery, but they’ve been working hard to pandemic-proof the business.

The robots are completely contactless. When an order is placed, the robot is deployed to the restaurant. When it arrives, a restaurant worker will meet it outside and wave, which signals it to open the lid. They place the food inside, it closes, locks, and then drives to the location. When it gets there, the customer is notified, meets it outside, waves again, and the lid opens with their order.

“The main problem we’re trying to solve is the issue of the last-mile delivery,” says Tiny Mile account manager of partnerships Omar Elawi. “That’s where the name comes from. The last mile is the biggest logistical nightmare that exists in delivery right now.”

Elawi says the model used by Uber Eats and similar companies like Skip the Dishes and DoorDash is not sustainable. Issues of misclassification of workers and high commission fees for restaurants stem from that problem of profit margins – in order to make it work, they pass the cost onto restaurants, customers or labour.

Tiny Mile actually does deliver with Uber Eats, but restaurants don’t pay the same commission fees. Elawi says they’re saving between five and 15 per cent in those fees. “For the first time, Uber becomes a lot more affordable for them.”

Restaurants pay less on Uber Eats if they choose to use their own couriers, and that setting – BYOC – is what they use with Tiny Mile. But instead of sending out their own delivery drivers, they’re sending out a signal to Tiny Mile who sends out a Geoffrey robot.

For a restaurant like Animal Liberation Kitchen, it’s a win-win. They get free promotion, save some money and can control the order. Spasic says one big issue when it comes to delivery is drivers arriving without thermal bags, which can cause the food to arrive cold at the customer’s door. Geoffrey is thermal lined and has cupholders (ALK sells a lot of smoothies). They know the robot will arrive within 10-15 minutes.

The company was more aggressively onboarding restaurants at the beginning of the pandemic, but has decided to limit itself to spots within a two-kilometre radius of its headquarters at King and River for now. That’s mostly logistical, or in Elawi’s words “to get the best possible robot utilization.” They don’t want restaurants or customers to wait longer than they would for a human courier, which was an issue early on.

Automation is a spectre hanging over many industries right now. Workers are afraid they’ll be replaced by robots, and companies like Uber and Amazon are experimenting with autonomous technology like self-driving cars and drones.

There’s a reason the Geoffrey robots are so aggressively cute. Can anyone feel threatened by a little pink robot with hearts for eyes?

But despite a lot of misconceptions, Tiny Mile’s robots are not actually autonomous. They’re remotely operated by real people, working from home on laptops and Xbox controllers. Geoffrey has a built-in GPS, which the WFH pilots use to navigate. They have a 360-degree field of view from the robot’s built-in cameras. So when people are gawking at a robot, or if a dog is barking at it, there’s someone at home who can see it happening.

“Creating these new avenues actually creates new jobs,” argues Elawi. “You need to hire pilots, technicians, dispatchers, maintenance people, engineers. There’s a rescuer who will hop on an e-bike if a robot gets stuck or if a customer is unable to come out and get their food. That’s multiple jobs created versus just one courier.”

Unlike gig workers delivering for Uber and its competitors, Tiny Mile’s pilots are actually classified as employees and paid a salary.

That’s welcome news for Jennifer Scott, president of Gig Workers United. That gig workers community union, which is under the umbrella of the Canadian Union of Postal Workers, was born out of the Foodsters, a union of Foodora workers who won the right to organize before the food delivery company abruptly left Canada.

Now they’re fighting for proper job classification while Uber is trying to introduce a new labour category in Canadian labour law called Flexible Work+, which would add some benefits to the independent contractor model. But Gig Workers Unite argue that this would not give them the employee protections workers in all other fields are entitled to.

For Scott, learning of a local startup that classifies its couriers as employees is a major step in the right direction. The fact that they’re on a computer rather than a bike is beside the point when it comes to courier solidarity.

“Whenever we see automation entering into the industry, it can kind of act like a mask,” she says. “Behind automation there are always many human beings behind the scenes making the automation work, and we want them to have access to labour protections, for them not to be working precariously.

“I’m happy to hear that these folks who are doing food delivery, doing the work to make the little robots run, are correctly classified,” she continues. “If they’re receiving salaried wages, they have access to recourse, pay transparency, health and safety standards. Seeing a group of workers have that within the gig economy proves that it is possible – and it’s necessary.”

Tiny Mile is still in the pilot stage, focusing now on improving service, quality, engineering and efficiency. The next step is to increase the number of robots out on the street, with each pilot controlling multiple orders at the same time. They do also plan to integrate some artificial intelligence so they can eventually become semi-autonomous. Once they hit scale and the novelty wears off, scrutiny over questions of labour and small business could also increase.

If the robots are taking over, let’s hope they’ll continue to benefit the humans behind them.