Toronto food banks are worried about challenges that lie beyond winter 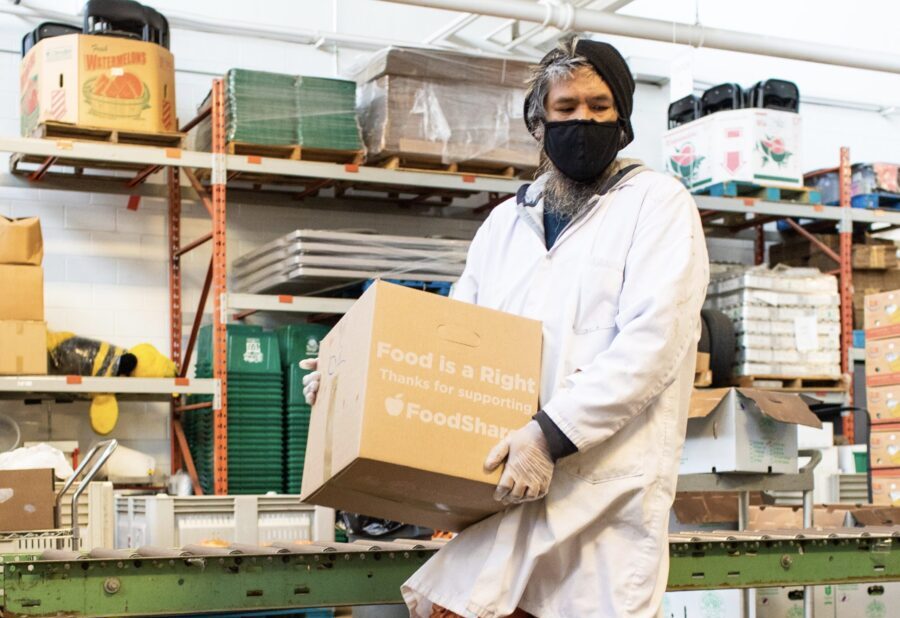 Pandemic lockdowns and job losses led to a spike in usage in April and May and demand continued rising steadily throughout the summer.

In October, Parkdale Community Food Bank (PCFB) posted a video on Instagram of empty shelves – it had run out of donations. Most Toronto food banks rely on donations and if they lose community support, they cannot function.

Within the week, PCFB’s shelves were restocked thanks to an outpouring of support from people in the neighbourhood.

“The bulk of the money we raised didn’t come from government or large corporations or even medium sized corporations, but from folks around the city of Toronto,” said the food justice organization’s executive director Paul Taylor.

Meanwhile, the Daily Bread Food Bank, one of the largest food banks in Canada, received a one-time donation in May from Ontario of 60,000 hampers containing seven days worth of food. That lasted two weeks; it was meant to last a month. Daily Bread also received $2.3 million in April from the federal government, money that came and went immediately to buy food.

The organization raised $3.2 million and 264,000 pounds of food from the community during their October drive-thru food drive.

CEO Neil Hetherington asked the board to double the food purchasing budget earlier this year and again in September. He anticipates he will have to ask for another doubling in January.

The biggest issue that is affecting Toronto food banks and food organizations is whether the funding will last into the winter and beyond.

Here’s how major Toronto food banks are adapting to increased demand this winter.

A switch to curbside pick-up from allowing clients to enter the building and select the food they want is how PCFB, North York Harvest Food Bank and Daily Bread adapted to the pandemic.

They now run on appointment-only models for people who have specific dietary needs and need a customized food box.

All have either added delivery or increased delivery capacity to get food out to immunocompromised and elderly clients in isolation.

FoodShare created the Emergency Good Food Box, a free version of its fresh produce and food delivery service, to fill the need after the spring surge in demand. It prioritized those already at a higher risk for food insecurity, the Black and Indigenous communities and various other racialized communities.

Everyone is seeing an increase in need. FoodShare went from 300 deliveries a week to 6,000 at the peak in April and May and between 1,000-2,000 in September and November. Daily Bread is serving double the amount of people as this time last year. North York Harvest has seen a 75 per cent increase in use.

North York Harvest has also seen a spike in the number of families accessing their services.

Daily Bread supplies food to numerous banks throughout the city and cannot afford to miss a day of deliveries. They have created winter continuity plans in case anyone on their team falls ill.

If infection rates become dire, their last resort is to have a skeleton staff of 20 people who will live at the warehouse and distribute the food – nobody else will be allowed in or out of the building.

“If you think about the immense pressure on the volunteers and staff, every single week there are over 25,000 families who need our food. It can be overwhelming to think about what happens if we don’t get the delivery to them,” said Hetherington.

Taylor says fundraising for the emergency boxes has dropped significantly and they are trying to figure out how to sustain it into 2021.

Donations to Toronto food banks often peak between Thanksgiving and taper off after Christmas.

North York Harvest executive director Ryan Noble says the current supply will get them to the end of December. They typically rely on holiday donations to raise funds and food for the upcoming year.

The immediate challenge they’re facing as temperatures cool is how to continue curbside pick-up and other outdoor services.

“In some ways we’ve had the benefit of being able to deal with the pandemic so far over the summer months. How do we do that when daylight is shorter, when the weather’s not cooperating? Right now, we’re making sure we have the equipment, tents and heaters,” said Noble.

Even after a COVID-19 vaccine becomes widely available, economic and social recovery will take a while. Daily Bread has a three-and-a-half year distribution plan.

“People were generous enough in this past quarter. But if 2008-2009 is any reflection of what we’re going to experience, the individuals that we’re helping now are going to need help three or four years from now.”

Noble doesn’t think we’ve seen the height of the economic fallout yet.

Recalling the 2008 recession he said, “It took two years before we saw food bank usage peak, which makes sense because if you haven’t used a food bank and you lose a job, you probably don’t go to the food bank the next day.

“You’re going to start burning through savings, burning through credit,” he added. “Once you run out of options, sometimes we say the visit to the food bank is the final capitulation.”

Another long-term concern is donors will become fatigued – or become users in the next three years. One jarring lesson that Noble shared from the 2008 recession is that the spike in demand that happened in the following two years never went back down; it became the new normal.

The community steps up

Many mutual aid organizations popped up during the pandemic or expanded mandates to reflect food insecurity more broadly. Uplift Kitchen and This Way Up Collective are two new, volunteer-based groups that launched in the summer.

Uplift Kitchen, started by neighbours Antonia Lawrence and Emily Carson, prepares and delivers home-cooked meals. It has 160 volunteers who cook and deliver meals to over 300 people.

Following the spike in cases in October, they went on hiatus and are organizing a winter clothing drive for their clients. Uplift is in the midst of regrouping and updating their model for the winter, but plan on returning to meal deliveries.

“This isn’t ending anytime soon,” said Carson. “Whatever you can donate, whatever time you can give, whatever food you can make extra, it’s really important that we all work together to make sure that those who are going hungry aren’t left so far behind that we can’t get them back.”

This Way Up is a collective made up of six core members who are either living in the shelter system or have past experience with precarious housing.

They started preparing hot meals for protesters of the AIR (Afro Indigenous Rising) Collective and Not Another Black Life during the civil unrest following the killings of Black and Indigenous people in Canada and the United States at the hands of police.

The shelter received a surplus of food during the pandemic from different donors and they decided to cook it up and bring prepared meals to the protesters.

They later got in touch with Encampment Support Network and started supplying hot meals every weekend to residents at the Scadding Court encampment, and they recently expanded to Moss Park and Trinity Bellwoods. They’ve made close to 1,800 meals and plan to continue.

“One of the things that made us stand out with the residents was that we’re all homeless, so we know the struggle of where is your next meal coming from? Where are you going to be resting your head?”’ said member Stephanie Osorio-Springer.

The bigger picture of food insecurity

Flemingdon Food Bank serves a community of immigrant newcomers and low-income families. Between 700 to 1,000 people rely on it weekly. Chadi Abedalrazek is the operations manager and he is reliant on Daily Bread and other donations. If he missed a single day of deliveries he says he would be in crisis mode.

At a recent workshop with Second Harvest, he learned Canada’s surplus food waste is enough to feed 15 million people a year, far outpacing the 4.4 million Canadians who are food insecure. He points to systemic problems, existing before the pandemic, connecting the dots between different forms of social and economic disparity and food insecurity

Calls for a national childcare strategy, a national pharmacare strategy, more permanent housing solutions and a concerted effort to combat anti-Black racism are on the long list of things that also exacerbate food insecurity.

Hetherignton believes organizations have the ear of the government right now. He recently spoke with the prime minister, the premier and the mayor. “All of them are keenly interested, regardless of political stripe, about making things build back better,” he said.

Since 1976, all Canadians have had the right to food. Taylor questions why food banks, charities and mutual aid programs exist if that is the case.

“We shouldn’t have to rely on kind hearts or corporate marketing budgets to advance our right to food in this country. We should be relying on effective and meaningful public policy,” said Taylor. “Our politicians have spent generations allowing our social safety net to wither away. That’s what we need to be building up and ensuring that we’re not in a situation like this where we have people who have been made homeless and who have to make difficult choices around food.”