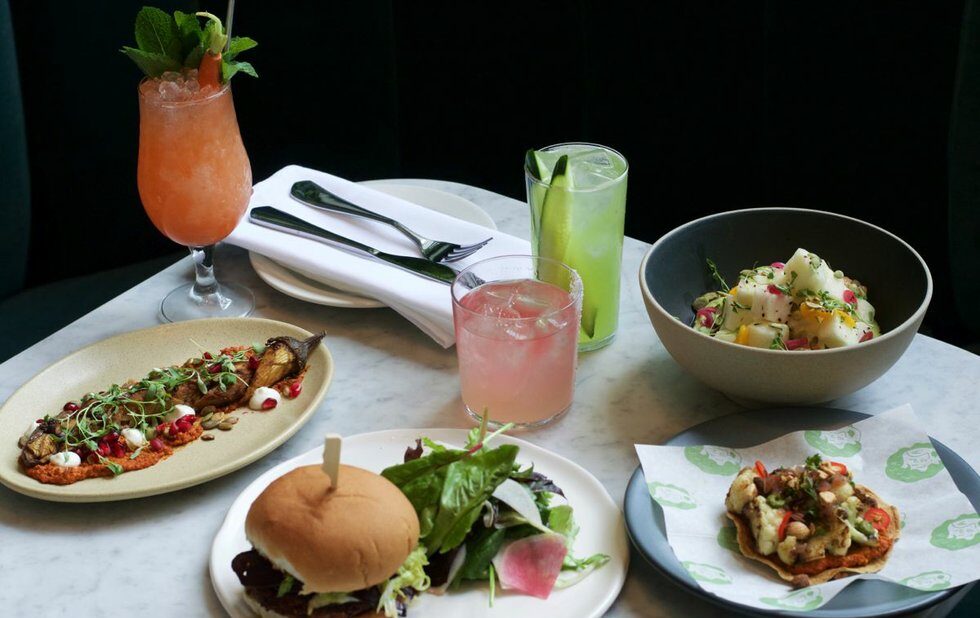 Gone are the days when vegan dining in Toronto meant having to choose between twiggy salads or deep-fried loaves of TVP. Thanks to a wave of new arrivals on the vegan (or, ahem, “plant-based”) food scene, meatless eating has never been so varied, stylish or delicious. Here are 10 of the best herbivore haunts to grace Toronto in the past two years.

Rosalinda wasn’t the first place in Toronto to do upscale plant-based dining, but it deserves commendation for how seamlessly it melds its mandates. The Pizzeria Libretto team’s collaboration with Grant van Gameren (who, in turn, brought in chefs Kate Chomyshyn and Julio Guajardo) is a modern Mexican spot first, a vegetarian restaurant second. Dishes like roasted eggplant with peanutty salsa macha, roasted cauliflower tostadas and jicama-citrus salad make such an impact on the plate and the taste buds, you would never notice anything’s missing. The veggie burger is their one obvious nod to their status as a safe harbour for vegans – but instead of the usual bland, chewy puck, you get a black bean patty topped with chipotle mayo and bursting with smoky, spicy flavour, because this place doesn’t do anything by half.

Read our full profile of Rosalinda. 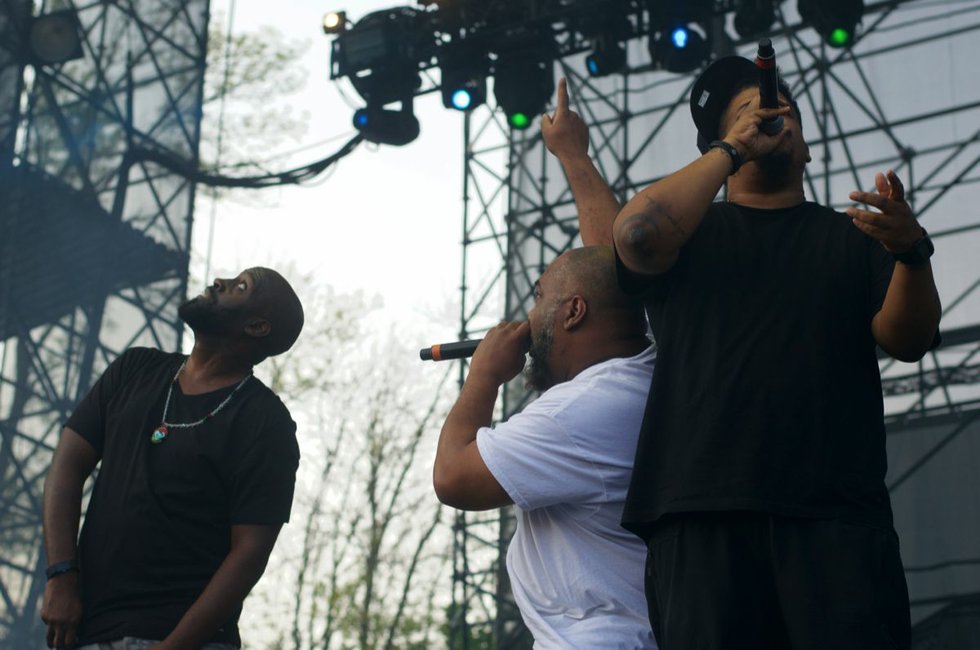 How has Toronto’s most venerable vegetarian restaurant empire adjusted to the wave of sleek, swank, plant-based competitors following in its footsteps? They let it light a fire under them – as the company’s latest outing, a glossy spot on the St. Lawrence strip, proves. Done up in marble, exposed brick, velvet and custom-patterned tile, the new Fresh features a coffee counter stocked with sweets, a fridge full of cold-pressed juices, a menu of multicoloured cocktails and kombucha drinks, and new menu additions – like addictive buffalo cauliflower or nachos smothered in miso-cashew cheese sauce – nod to nights out with the gang. 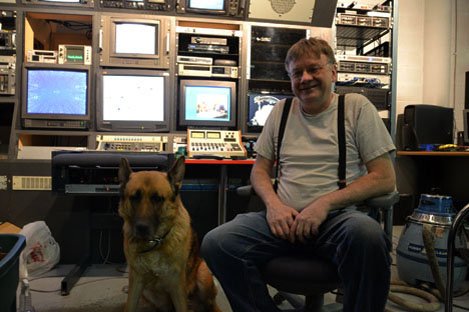 The team behind Hello 123 has had plenty of practise turning plants into crowd-pleasing recipes, having grown their chain of wheatless ’n’ meatless fast-casual takeout joints, Kupfert & Kim, to a healthy six locations across Toronto. At this hip little all-day spot on Queen West, they finally get to play with concepts that wouldn’t fly in food courts: cocktails and biodynamic wines, small plates, DJ nights. Fun eats like Mexican street corn decked out in vegan cheese and mayo and paleo platters stocked with sunflower-hemp balls, sunflower hummus and chimichurri underscore the party vibe.

Read our full profile of Hello 123. 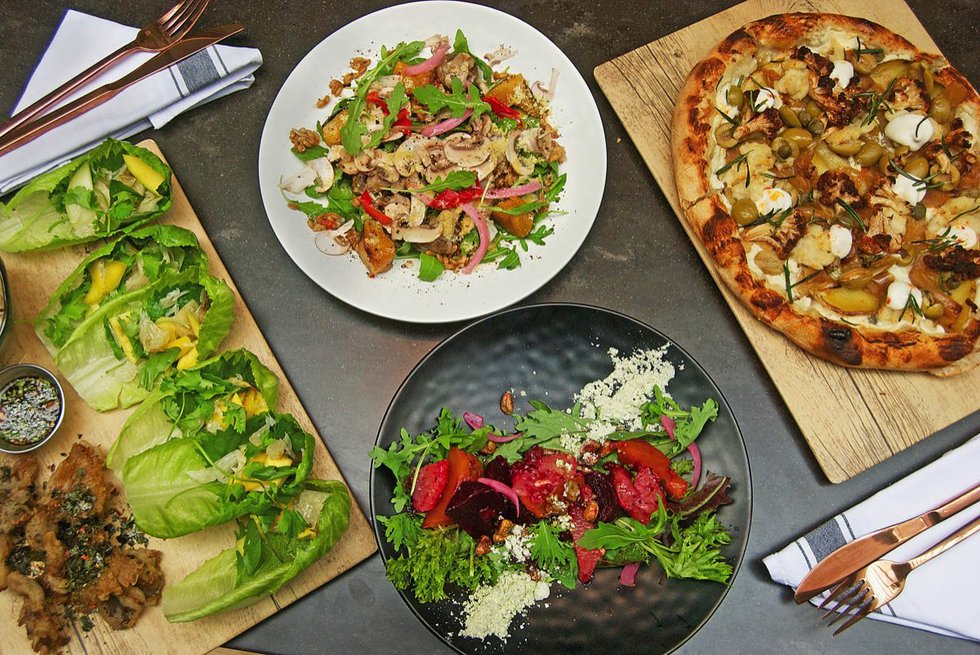 In 2016, Planta’s insistence on the phrase “plant-based” seemed like an amusing affectation, but the Chase Hospitality Group and their co-conspirator David Lee, formerly of Nota Bene, proved to be ahead of the curve (and not just linguistically). The pure-Yorkville eatery, with its palm-frond wallpaper and hammock chairs, ushered in what proved to be a local boom in upscale vegan eats, with a solid menu of dishes like wood-fired pizzas, coconut ceviche and a legitimately righteous queso dip outlasting the novelty factor of items like a smoked-carrot hot dog. So successful was the concept that it spurred two Planta Burger spinoffs (one downtown and one in South Beach), which recast Planta creations like crab cakes as reasonably priced burger combos. Shocker: that cheese dip rules on taco fries.

Read our full profile of Planta. 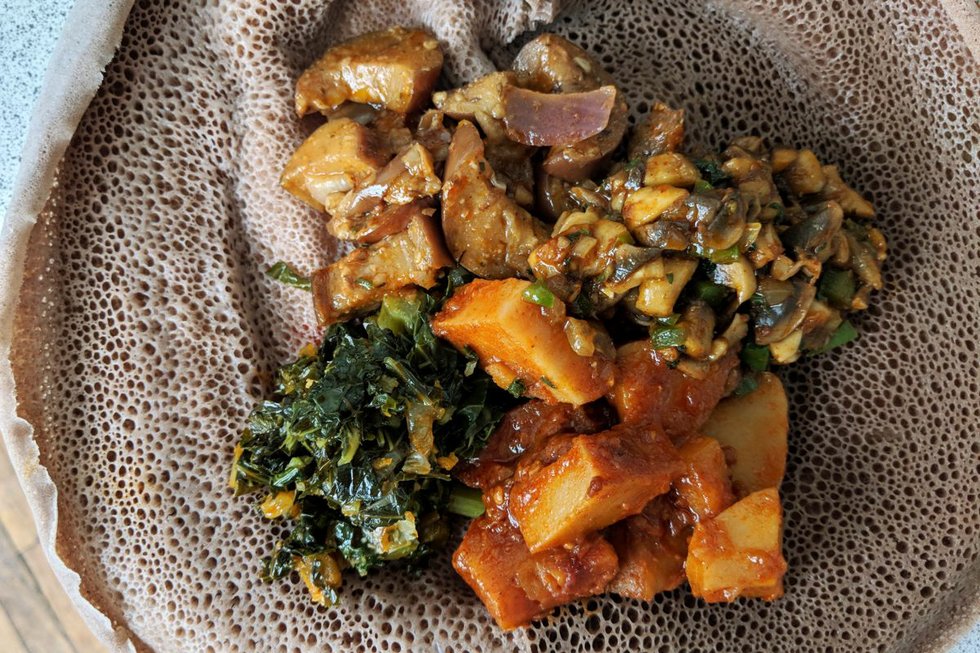 Your average Ethiopian kitchen is better equipped to serve vegans than 90 per cent of the restaurants out there. (Fun fact: animal-product-free fasts are mandated roughly two-thirds of the year in the Ethiopian Orthodox Church, cementing vegan cooking as a backbone of the country’s cuisine.) But Bloor West spot Pero is doing them all one better by launching an entirely vegan sister restaurant. Selam is currently a delivery-only operation, with a full dining room set to open in September. Until then, you can order via Foodora, UberEats, Skip The Dishes and all the other usual suspects – and I’d recommend you do so, as their bitter collards and garlic, berbere-laced potatoes and mushroom-based take on dullet won’t last long after delivery. 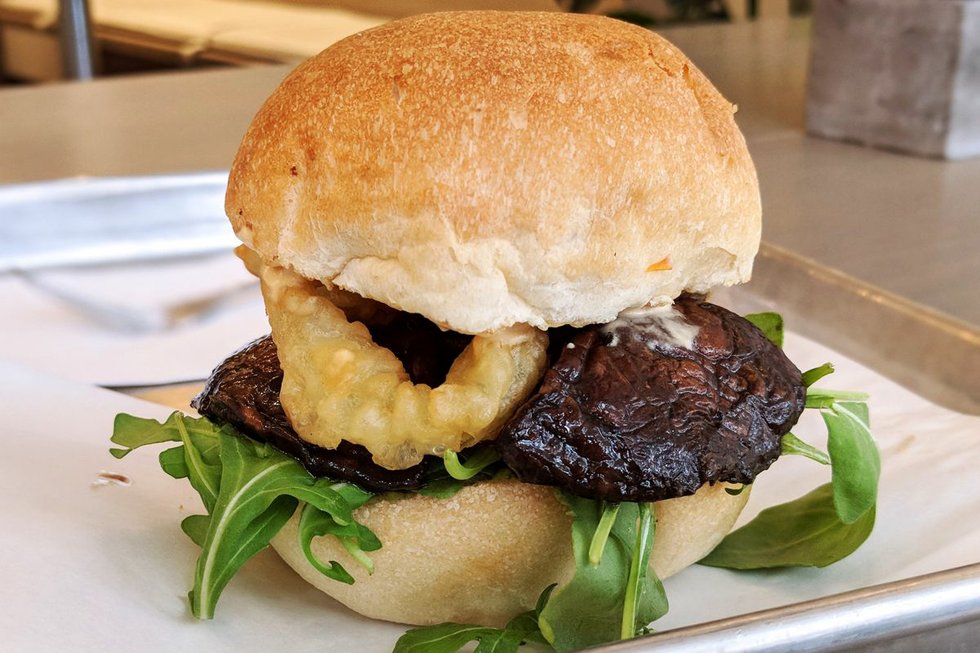 The minimalist, modern all-white dining room might lead you to believe that Parka is just another salad bowl joint, but Eric Chao’s vegan Queen West takeout shop sets itself apart by choosing two offbeat menu pillars: veggie burgers and mac and cheese, based on hyper-local ingredients and rounded out with fun sides and house-made sodas. Parka’s macs, if we’re being honest, taste a little too healthy to really nail the comfort food factor – I like to be able to pretend my vegan cheese sauce isn’t mostly pureed carrots and nutritional yeast – but a hearty dose of ketchup and hot sauce works wonders. What doesn’t need any dressing up, however, is the portobello burger, which parks a savoury soy-marinated mushroom cap atop a smushy bun with a crisp, puffy onion ring (also available as a side order), spicy aioli and citrusy guac. The more it collapses into a sloppy mess, the better it gets. 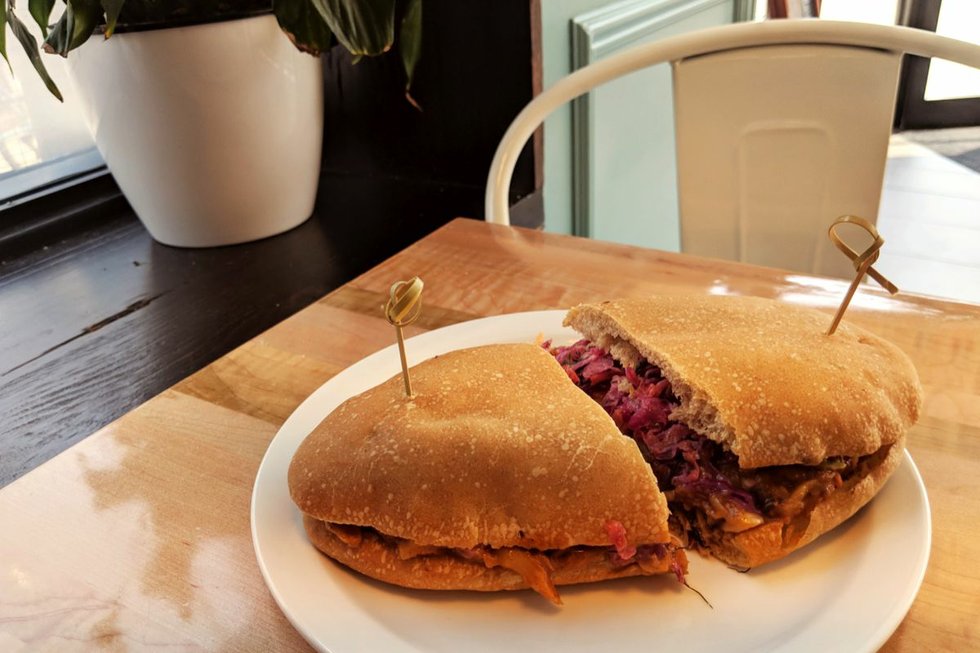 There’s something enigmatic about Bloor West’s Awai – the candlelit dining room in a sleepy neighbourhood, the ever-changing menu — so this spinoff, a breezy all-day café, makes for the perfect foil. Tucked into a corner unit in Little Italy, Away comes complete with shelves of plants and the requisite smattering of freelancers with laptops. Coffee and baked goods (from a hunter-green citrus and herb cake loaf to savoury scones topped with almond pâté) are rounded out with a tight salad and sandwich menu. One recent lunch offering: a delightful sloppy-Joe-like BBQ shredded king mushroom sammy, topped with a cooling coleslaw tinged with dill. Rise it down with non-alc spritzers like a pinot noir verjus version rimmed with a kaffir lime powder. Pretty sophisticated for a little corner café! 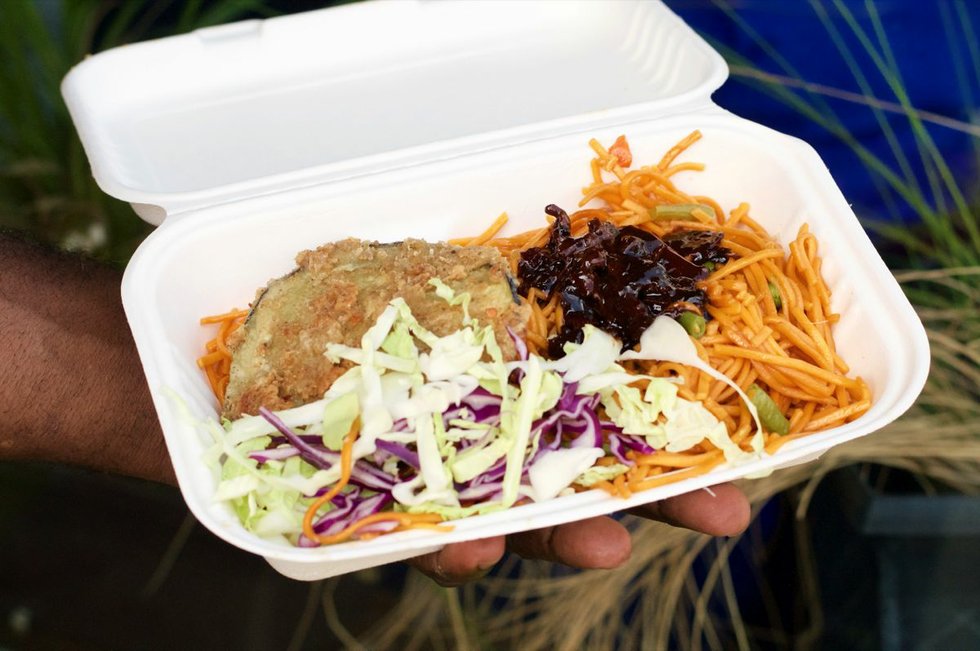 The strip of Eglinton West known as Little Jamaica is brimming with jerk chicken and beef patties, but plant-eaters might find themselves low on options. Here to fix that is Sherlock Shepherd, a longtime fixture on the strip (he also runs Celebrity Hair next door) who decided to flex his culinary chops for the benefit of local herbivores. At his bright yellow takeout spot, the options include sweet ’n’ saucy BBQ tofu ribs, fried eggplant “fish” and Chinese-Caribbean faves like chow mein and fried rice alongside the usual grain and greens. Word to the wise: if the restaurant looks closed, he might just be doing someone’s hair next door. (This is the only time I have ever had to write that sentence.) 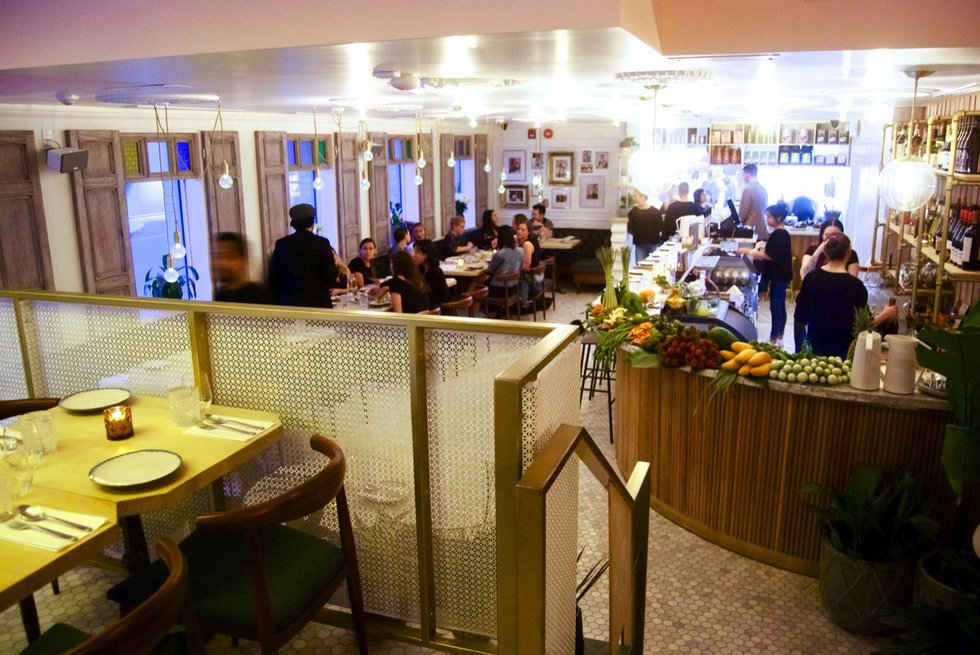 Things have changed at this moody Bloor West kitchen since it opened in early 2017. Founding chef Nathan Isberg (the Atlantic) has taken a step back, and the pay-what-you-can concept – a worthy experiment, but one that seemed to confound the lion’s share of diners – has been jettisoned. But the seasonal chef’s choice tasting-menu format remains (choose from five or seven courses, with or without wine pairings), as does a focus on seasonality and a sound reputation for quality. There are buzzier, glammier spots, but Awai may be the most impressive vegan-date-night destination in town.

Read our full profile of Awai. 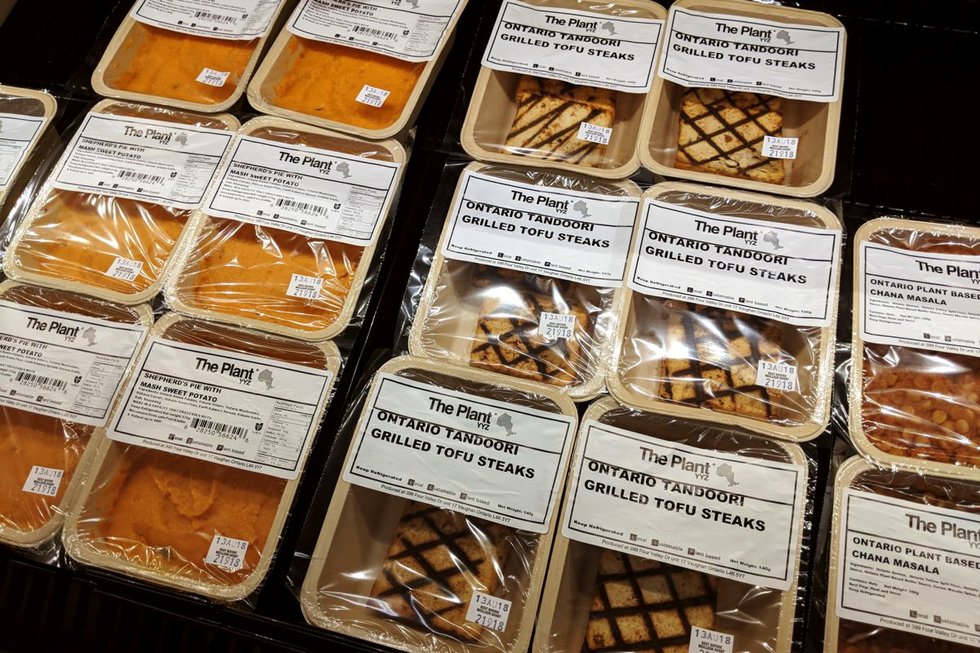 Lazy vegans will love this minimal, modern pantry stocked with everything from alfredo sauce and jerk-pulled jackfruit to trays of vegan shepherd’s pie, mushroom tartare and tandoori tofu steaks. Nearly everything the family-run spot sells is made at its facility in Vaughan, with institutional-chic packaging taking pains to list every single piece of Ontario produce inside each recipe. Because of that hyper-local focus, many of the items are produced in limited quantities. Pro tip: stop in on Tuesday, when the big restock for the week happens.

Hungry for more? Check out our list of vegan- and vegetarian-friendly non-veg restaurants.

For classic plant-based Toronto spots, check out our 2016 vegan and vegetarian dining guide.