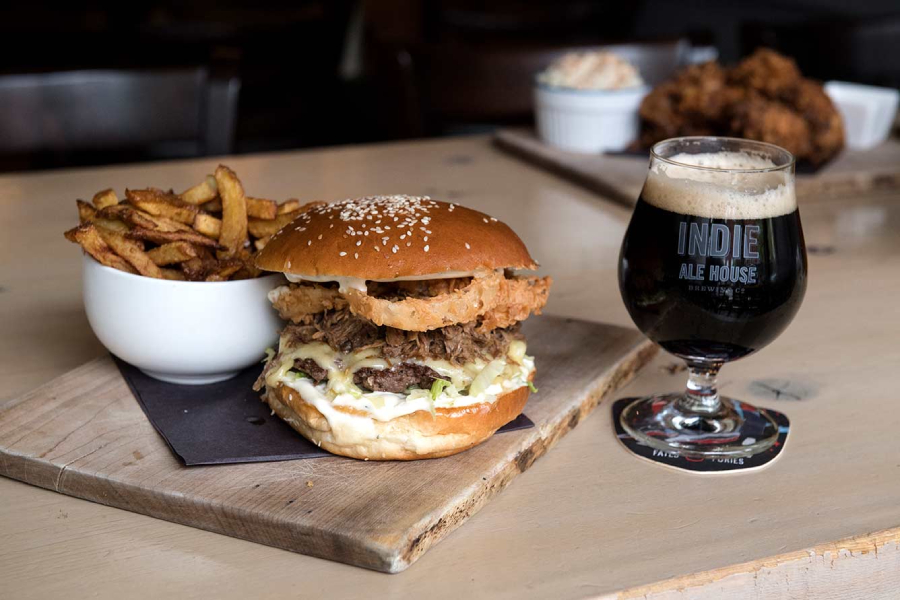 In addition to these exciting wins, the brewery and brewpub also placed first runner-up within the categories of Best Toronto Beer (Wheat Beer), Best Cafe TO Patio, and Best Bottle Shop.

So if you haven’t been to Indie Alehouse or cracked open one of its refreshing beers, what the heck are you waiting for?

Over the past few years in Toronto, craft beer has surged in popularity and Indie Alehouse was very much at the forefront of the microbrew movement.

Locals consider the small craft brewery, located in the Junction neighbourhood, a hidden gem. It was one of the first breweries to open in the new wave of independent brewers, crafting bold, flavourful ales with broad appeal. Brewery-hopping, with a stop at Indie Alehouse (2876 Dundas West), has quickly become every Torontonian’s favourite pastime.

At the brewpub, guests can enjoy the lively atmosphere that extends onto its patio and mouthwatering dishes like the buttermilk fried chicken sandwich, crispy buffalo cauliflower, and pizza topped with pepperoni and hot honey. But no meal is complete without a pint or tasting flight, which is why Indie Alehouse boasts a comprehensive drink menu that features 20 beers that are brewed onsite.

“We definitely have more fun making these two beers than should be allowed,” says Indie Alehouse owner Jason Fisher.

Instigator is a West Coast-style IPA that the brewpub has been making since it first opened. Now, the 6.5 percent ABV beer with citrus, grapefruit, and pine aromatic notes is available at locations all over Toronto. People can enjoy the beer’s juicy hop bitterness and clean balanced finish at several local bars and restaurants or at home.

The Italian pilsner, Marco Polo, is dry hopped with traditional European noble hops for a fresh aroma, combined with a clean, crisp finish. The beer, which is perfect for sipping year-round, is aged to create a smooth malt body that balances the hop notes and drinks like a premium European pilsner. Marco Polo is five percent ABV.

If you prefer shopping online, you can order beer, brewery-inspired merchandise, and the 2021 Indie Beer Advent Calendar via Indie Alehouse’s virtual bottle shop.

For more information or to check out Indie Alehouse’s food and beer menus, visit indiealehouse.com.