Why some Toronto restaurants are ending tipping

As the pandemic highlights inequalities in the food service industry, some restaurant owners are scrapping – or rethinking – a long-held norm 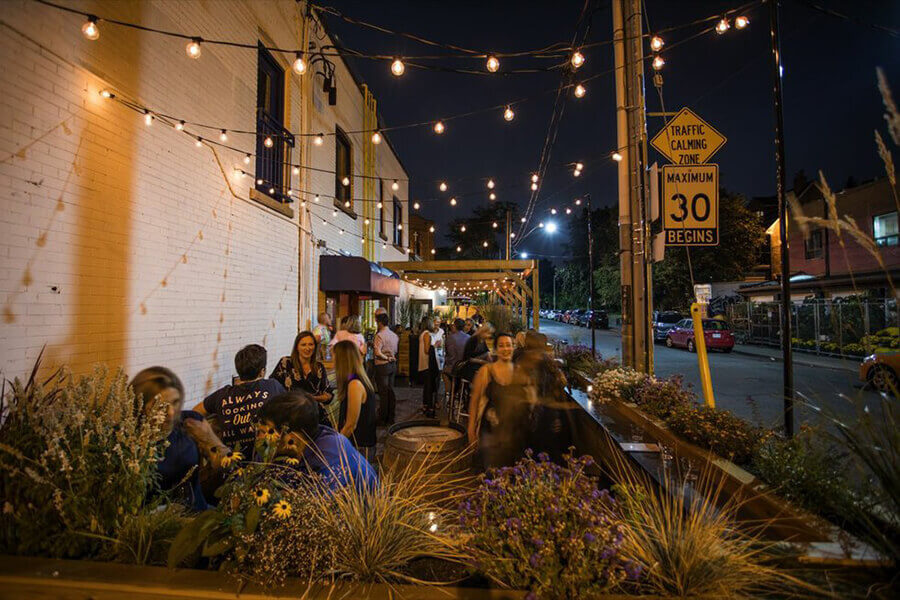 Courtesy of the Burdock

The Burdock reopened its patio with a pared-down menu and a new no-tipping policy. (File photo)

You know the dance.

You’re tasting the last bite of your dessert and the bill arrives. It was a tasty meal and the service was pretty good. You’ve got the Moneris machine in your hand and you can tell the server is smiling encouragingly under her mask. Your dining partner has his eye on your fingers.

What do you tip? Seventeen per cent? Eighteen? But it’s a pandemic, so do you bring it up to 20? How much is everyone making nowadays?

That awkward calculation, already full of unspoken considerations, has become even more contentious during COVID-19. All the assumptions that are built into the practice of tipping – the lower minimum wage that restaurant workers make, compensated for by the customer’s generosity – have been destabilized by the pandemic.

So some Toronto restaurants like Richmond Station, Ten, Avelo and Burdock are rethinking tipping altogether. They’re adding suggested or automatic service fees, splitting the tips between workers or just getting rid of tipping entirely and building labour into the cost of the food.

Could tipping be on the way out?

The tipping point in Toronto

This isn’t the first time restaurants in Toronto have toyed with eliminating tipping, and it’s a contentious topic every time. But the coronavirus pandemic is allowing restaurateurs to rethink their business and minimize inequalities that we take for granted.

Much like the backlash against commission-taking third-party delivery apps like Uber Eats that arose during government-imposed lockdown measures, some restaurants are drawing attention to the imbalance that comes with tipping.

Though the restaurants all have slightly different reasons for shaking up the status quo, they all have the same motivation: Paying workers a living wage.

“It sounds radical, but it really shouldn’t,” says Emma Herrera, head chef at Burdock Brewery. “We’re just aiming for the most basic acceptable professional level, the same as all other industries. We don’t want our staff to have to rely on the whims of guests to make sure they can pay their rent.”

After pivoting to beer delivery during the pandemic, Burdock recently reopened its patio with a pared-down menu and a new no-tipping policy. Instead of a service fee, menu prices have gone up to include labour. That lets Toronto restaurants increase the hourly wage for staff while removing the instability that comes with tipping.

The minimum wage for an adult in Ontario is $14.25 an hour, but for servers working in licensed bars or restaurants, it’s lower: $12.45 an hour. Tips are supposed to make up the difference, which means customers are essentially subsidizing wages.

But that economic model has changed during the pandemic.

While current local customs set the average tip around 18 per cent, that number is likely to fluctuate as the crisis continues. Some diners are earning less income too, and might be less inclined to splurge on a meal or tip generously. For other diners, leaving a good tip is a way to acknowledge the inherent risks of customer service jobs. There are also fewer tables because restaurants must operate at a lower capacity to ensure physical distancing, which means fewer tips.

“It encourages a level of professionalism in the industry,” explains Herrera. “It gives staff peace of mind. They can predict, they can plan. And that’s important, because the next few months feel so unpredictable.”

Hospitality jobs are already very unstable, as the pandemic highlighted in an extreme way.

When the provinces introduced lockdown measures in mid-March, restaurants close temporarily, and many workers were temporarily or permanently laid off.

Restaurants Canada reports the food service industry generated more than $93 billion in sales in 2019 and was expected to surpass $100 billion in next year. The industry group now predicts a loss of between $21.7 billion and $44.8 billion in annual sales due to the pandemic.

Ontario is now in stage 3 of the provincial reopening plan, which allowed indoor dining to restart with health and safety measures in place.

The federal Canada Emergency Response Benefit (CERB), which pays out $2,000 a month, became a lifeline for service workers. For many servers, the aid program was a taste of stability. Making a certain percentage of income in cash also means servers are not necessarily declaring their full earnings on their taxes, which could affect the amount of future payouts if they were to switch to regular employment insurance.

Then there’s the spectre of a second wave or an outbreak in a specific restaurant. Working at a restaurant now comes with the possibility that your job could end in an instant.

All in this together

Even if Toronto restaurant owners aren’t ending tipping, some are rethinking how tips are distributed among staff.

To cut down staffing levels and the amount of interaction between staff and customers during the pandemic, the restaurants are using the Ambassador platform for online ordering and paying. There’s a new minimum suggested tip – 18 per cent for dining in and 15 per cent for takeout – though customers are free to pay more or less.

Wilder believes in tipping as a practice, especially now when front-of-house jobs come with a certain amount of risk. He compares tips to the sales-job commissions, but with the extra variable that restaurant staff handle used cutlery, plates and napkins during a pandemic.

“Working at a restaurant is like putting on a theatre production twice a day,” he says. “Customers are coming in, they’re hungry – they can be hangry – and they have high expectations.

“Serving is like a very hard sales job,” he adds. “They deserve to make money, and they’re earning it by taking care of you. But what about the person sweating their guts off in a kitchen, or working in a dish pit, or scrubbing toilets, or serving you a beautiful cocktail? Don’t they deserve it, too?”

Paying out an equal amount of tips requires buy-in from staff. Whereas the traditional tipping model can create conflict between front- and back-of-house staff – not to mention between servers fighting over tables – both sides of the restaurant are working more closely together.

“The entire team is more happy – sharing, collaborating and supporting – all in it together.”

If not now, when?

Part of what allows Rose and Wilder to pay above minimum wage is the necessity to keep teams smaller. Profit margins at many restaurants have gone from 15-20 per cent to something more like two per cent, he says. That means some laid-off staff have not been rehired. Wilder hopes he can bring them back soon and that when he does they can continue the same tipping model.

Changing the status quo has been a controversial topic, and the pushback can come from both customers and servers. A server could potentially make a lot of money from a good night of tips, and it’s not easy to tell them to pass that up even if doing so means a more equitable labour policy.

When it comes to normalizing a no-tipping restaurant experience in North America, the figurehead is Danny Meyer, the man behind New York City’s Union Square Hospitality Group. Everyone interviewed this story has read about how his no-tipping experiments have worked.

Burdock’s Herrera and Roger Yang, who owns Avelo and Pizzeria Du, highlight something that Meyer has brought up: tipping is racist. Or, at least it has racist origins, hearkening back to just after the American Civil War, with companies petitioning the government to pass wages to the customer for jobs worked by Black people to skirt slavery laws.

Today, the same conscious and subconscious biases that are baked into systemic racism and capitalism create a discrepancy between how people are tipped. And tipping underscores disparity between front- and back-of-house jobs, which are often split along racial lines. Sexism also plays a major role, as women servers are often pressured or incentivized to put up with sexual misconduct on the job. (The owner of The Linkery, a tip-less restaurant in San Diego, wrote about this.)

Although the pandemic is pushing some restaurants toward Meyer’s theories, he has actually reversed course. He’s brought back tipping at Union Square Cafe and Gramercy Tavern in New York, saying that he won’t deny servers any extra compensation during these trying times.

Ultimately, tipping is so entrenched in Toronto dining culture that any restaurant trying to cut it out is taking a big risk and often putting themselves at a competitive disadvantage.

At Avelo and its predecessor Awai, Yang experimented with bumping up the menu prices to include service, but found the opposite problem: customers felt they were paying higher prices even though they paid the same when tipping was in effect (assuming they paid an average 18 per cent in tip).

Now he separates out an automatic 18 per cent service fee. Customers are more comfortable paying that fee if they can see it, he says.

At Burdock, Herrera says the vast majority of diners are fine with the higher menu prices, though they often ask pointed questions about how servers are paid. Either way, that transparency demystifies the business’ unspoken tipping culture.

Both Herrera and Wilder say they’re not trying to be trailblazers or muckrakers – they’re just listening to staff and trying to be as equitable as possible. But Yang – who’s also banded together with other restaurants to create a collectively-owned delivery network – loves that more restaurants are being public about cutting out tipping and hopes there’s a groundswell.

“If this is going to become normalized it will require many restaurants to do it, not just a few,” he says. “If the industry sees it works and the people see it works, there will be more consumer demand.”

He envisions a Toronto where tipping is no longer the norm. Right now he sees tipping as something awkward and inauthentic, an agreed-upon charade. Instead, tipping could be a reward for good service (its assumed definition) instead of a necessary way for workers to make a living wage.

“It’s the right time to get it going and really make a push for it,” he says. “If there’s a silver lining to the pandemic, it’s that people are able to see the inequalities that exist and are open to changing their behaviour.

“The industry needs this in the long term,” he continues. “If we just keep going the way we were, we’ll inevitably crash.”

On the latest episode of the NOW What podcast, Richard Trapunski discusses the tipping question further with Arielle Persaud of the Toronto Restaurant Workers’ Relief Fund and host Norm Wilner. Find it on on Apple Podcasts or Spotify, or just listen in the player below: