Food and mental health grow together at CAMH’s Sunshine Garden 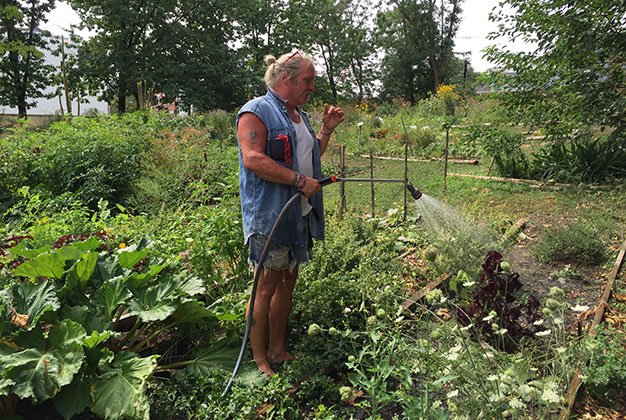 On days when Jamie works at Sunshine Garden, the 54-year-old Toronto resident likes to arrive three hours early for his shift. He’s been part of the horticultural therapy program run by FoodShare at the Centre for Addiction and Mental Health on Queen West for four years, and tries to spend as much time as he can here, barefoot and standing between rows of vegetable beds, with a garden hose in one hand and a coffee cup in the other.

“You need water and sun and love, and then you get this,” he says, gesturing to the harvest of organic fruits and vegetables. An elevated flower bed off to one side contains a half-dozen fresh herbs. Near CAMH’s Shaw Street entrance, a greenhouse is used to grow micro-greens and raise seedlings.

Like everyone who comes to Sunshine Garden, Jamie is a client at CAMH. Five years ago, he worked as a professional chef, and was addicted to drugs and alcohol. On June 13, 2011 – Jamie remembers the date – he sought help at CAMH and has remained sober ever since.

“Besides my son, my mother and a few other people I care about, this garden is probably the reason I’ve maintained my sobriety,” he says proudly.

FoodShare launched Sunshine Garden in 2002. A variety of CAMH patients are recommended to the program by their doctors, clinicians and counsellors. They’re selected by Liz Kirk, a senior coordinator at FoodShare, who takes on 10 to 30 clients each season. The group meets at least twice a week from May to October, gardening near the back of the property and eventually selling their harvest through a small wooden stall on Queen West near Gordon Bell. 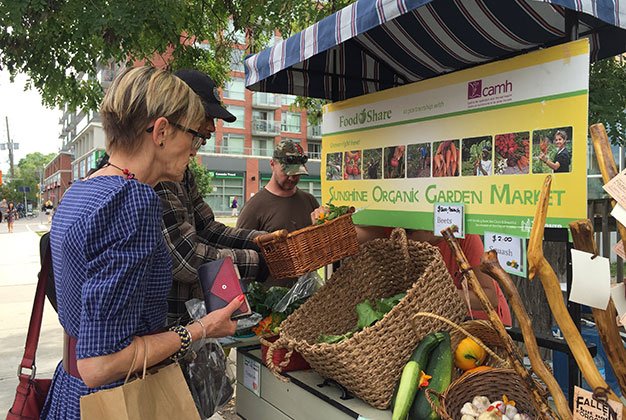 Twice per week, the public can support Sunshine Garden by shopping at its food stall.

What’s sold at the stall depends on what’s in season. When I dropped by recently, the bounty included everything from beans, Swiss chard and peppers to mesclun greens, arugula, eggplant and several types of heirloom tomatoes. Chutneys, salsas and herbal vinegars made from leftover produce are also on offer.

“Most people are surprised there’s a garden in CAMH, because it’s hidden from the street,” says Anna Ferrante, who’s in charge of running the food stand out front for a couple of hours on Mondays and Wednesdays. “Once they do learn about it, they’re interested.”

Ferrante is an environmental studies student at the University of Toronto on a work placement at FoodShare. Before her internship, she says she didn’t know much about growing her own food, but she enjoys the peacefulness of being outside in nature, working with the soil, tending to plants and watching things grow. CAMH clients get to take home whatever produce doesn’t sell.

Ferrante says, “I made a salad last week, and it was the freshest salad I’ve ever had.

“I was initially drawn to this program just to see how gardening, physical activity and even selling at the market help with mental illness,” she continues. “It’s come to mean so much more. I’ve noticed a couple of clients have really opened up throughout the program.” 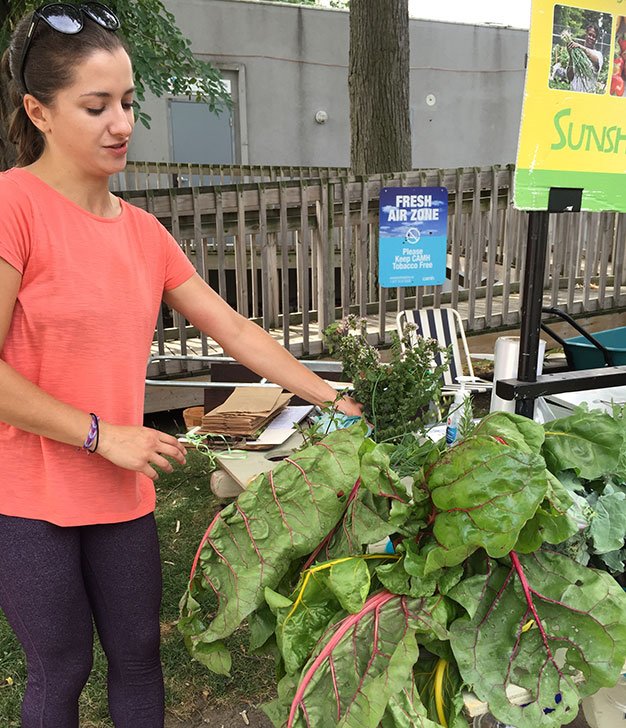 U of T student Anna Ferrante manages the produce stand out front.

In Canada, horticultural therapy has been popular for decades. The Canadian Horticultural Therapy Association was formed in the 1980s and now has nearly 200 members. According to the CHTA, gardening therapy is used in a variety of settings beyond facilities like CAMH, including nursing homes, rehabilitation centres and correctional facilities.

Phyllis Wong, an occupational therapist who runs an in-patient anxiety unit at CAMH, has recommended clients to the Sunshine Garden program. She says horticultural therapy is effective, depending on a client’s readiness, because it engages the whole person – seeing, being and doing.

“We can achieve mindfulness just by being in the garden and [engaging in] small activities like weeding, watering, planting, picking flower heads or collecting seeds – even with just the smallest task.”

Wong says horticultural therapy is particularly useful for clients working toward reintegrating into the community and employment. 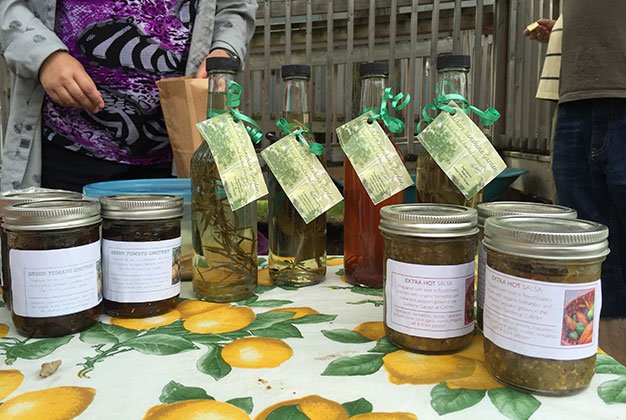 Along with fresh produce, the Sunshine Garden market sells chutneys and vinegars made by the group.

Craig was a latecomer to the program. He’s only been in the group since July, but says it’s made a noticeable difference in his life even though he used to do some gardening on his own. He says that adults without kids or pets don’t spend as much time outside surrounded by greenery.

“If I didn’t have the gardening group, I’d have nothing to do,” he says. “With this, at least I can get out two days a week, get to know people, get to talk to people. It’s a good outlet and peaceful environment.”

Jamie’s love of planting seeds and watching things grow has spread to his life at home, where he grows sunflowers, which he says are his favourite kind. There are a few sunflowers at Sunshine Garden, too, which he’s watered and nurtured to grow nearly 2 metres tall.

“Every season I see life, and I’ve come to appreciate it,” he says.