These are the city's essential vegan and vegetarian destinations – for a sit-down, multi-course meal or delivery 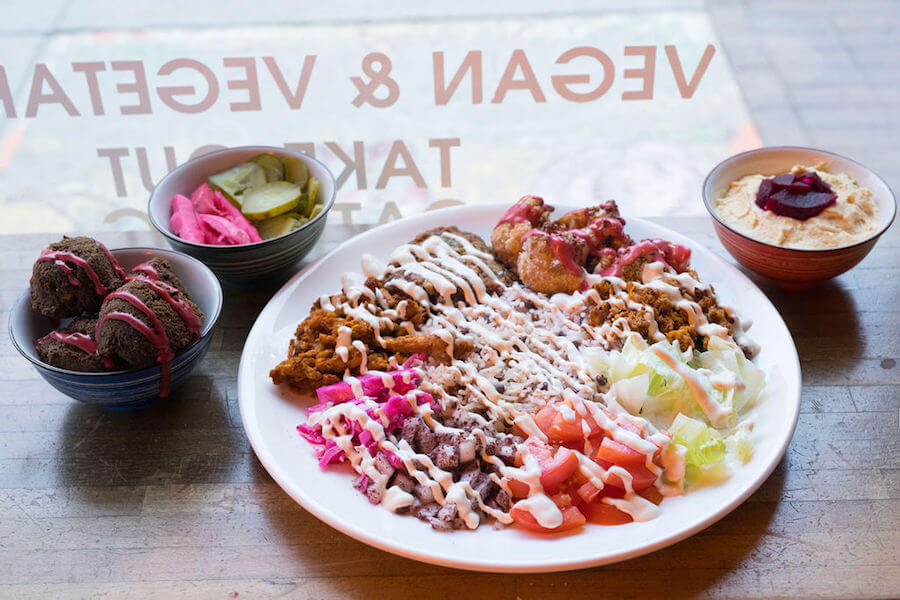 As plant-based eating continues to rise in popularity – for reasons ranging from ethics to nutrition – restaurants across Toronto are keeping pace.

While it has been some time since vegetarians were relegated to a few scant menu offerings, cruelty-free dining has now risen to the white-tablecloth arena, with upscale restaurants across the city offering exclusively plant-based menus. (But don’t worry: there are plenty of takeout and low-budget spots that are just as good as the special-occasion spots.)

Here are 10 new (and newish) places to find the best plant-based eats in Toronto whether you’re looking for a sit-down, multi-course meal, or a cruelty-free way to stock your own pantry at home.

In August, Kensington Market welcomed this Middle Eastern restaurant, which dishes up 100 per cent plant-based eats. The concept is right there in the name: “Nabati” means “made of plants.” You’ll find meat-free classics such as falafel and halloumi alongside cruelty-free shawarma (soy “chicken”) and kofta (spiced grains mixed with soy, in place of lamb or beef) alongside roasted eggplant, cauliflower spiced with za’atar, and pan-fried mushrooms. Don’t skimp on the tahini.
160 Baldwin, eatnabati.com

First, a bit of a caveat: Ten, the west-end fine dining spot that opened early last year, isn’t technically animal-product-free. Its 26-year-old chef and owner Julian Bentivegna calls his menus vegetable-forward. Seasonal produce is the star at Ten, with any meat, seafood or dairy usually playing second fiddle, as garnishes (think: crispy chicken skin). Think of it as a dining destination for vegetarians-in-waiting, or simply those who are looking to up their commitment to eating their greens.
1132 College, 10restaurant.ca

Haven is a plant-based takeout heaven for Annex dwellers. The eatery, which opened this spring – right as the pandemic hit – has been thriving on a solid menu of to-go vegan bowls, including sweet n’ sour chick’n, curry vermicelli bowls, and decadent truffled quinoa with goji berries. Haven also offers a small selection of appetizers and snacks, including a trio of truly mouth-watering artichoke croquettes.
366 Bloor West, instagram.com/haveneatery

Cutting out animal products shouldn’t mean having to skimp on sweets. From its locations  in Thornhill and on Queen West, this 100 per cent vegan bakery serves up a selection of cakes, pastries and other baked goods, plus lunch that includes traditional Danish open-faced sandwiches (like a veggie paté topped with vegan remoulade and dill on fresh sourdough). And don’t sleep on the Danish waffles for dessert.
1312 Queen West; 7718 Yonge, vegandanishbakery.wordpress.com

Thai restaurant Mugi opened at Bloor and Bathurst in 2019.

Since mid-2019, Mugi has been cooking up incredibly flavourful vegan Thai dishes at the corner of Bloor and Bathurst. The pandemic has limited the restaurant’s operating hours substantially: it’s currently only open Friday to Sunday. So you’ll want to set some time aside on the weekend to pop in for a bowl of massaman curry or a hearty serving of pineapple curry fried rice. Take-home provisions include a selection of made-in-house chili oils.
793 Bathurst, mugi.ca

There’s nothing new about the cruelty-free meal delivery service that’s operated out of a Roncesvalles storefront since 2017. But in late 2020, when dining out can still feel like a risky proposition – but home-cooking might be, at this point, losing a bit of its novelty appeal – SIGP is more relevant than ever. Customers can choose from a selection of grocery staples, including vegan cheeses, Beyond Meat products and fresh fruit and veg, or select from four meal kits costing a very reasonable $20 each.
476 Roncesvalles, sorryivegotplants.com

Mexican restaurant La Bartola opened during the pandemic and is already a vegan favourite.

Yet another restaurant that opened mid-pandemic, La Bartola has already become a vegan favourite. Chef Ivan Castro’s plant-based Mexican fare has been a mainstay at various pop-ups across the city since 2019. In August, he finally opened his bricks-and-mortar location on College. Menu options include jackfruit tacos al pastor, enmoladas made with braised hibiscus, as well as a refreshing oat milk horchata.
588 College, labartola.ca

Chef Elia Herrera’s latest Toronto spot is a plant-based take on her food at Colibri, which is also located within Assembly Chef’s Hall. At LosCo, burritos are stuffed with tofu and plant-based cheese while quesadillas feature fresh flour tortillas sandwiching jackfruit and deeply flavourful mole. Smoothie lovers have a small menu to choose from, too, featuring a peanut butter, cocoa powder, plant-based milk and plant-based-protein-laden option, among others.
111 Richmond West (in Assembly Chef’s Hall), instagram.com/loscovegan

A Nanashake is, essentially, a banana-based soft-serve dessert – though with a variety of plant-based ingredients to choose from, including spiced date, rosewater and pistachio, the banana-averse need not shy away. Nanashake also serves milkshakes, dessert bowls and popsicles from its storefront in North York until September 13, at which time it closes for the season. But don’t worry: its products are available year-round from various specialty food stores across the GTA, including Noah’s and McEwan.
4750 Yonge, nanashake.com

Since 2016, Good Rebel, on trendy Dundas West, has been a Toronto destination for plant-based eats and provisions. At time of writing, the store has not yet reopened for in-store shopping due to COVID-19, but has pivoted to grocery delivery and curbside pickup – so shoppers can still stock their pantries with vegan goodies and essentials, plus cruelty-free skincare and cleaning products.
1591 Dundas West, goodrebelvegan.com

The best cheap eats in Toronto

The best vegan and vegetarian restaurants in Toronto (2018)