For Argo fans, that sinking feeling

Toronto's storied football franchise is on life support, and the CFL isn't in any particular hurry to do anything about it 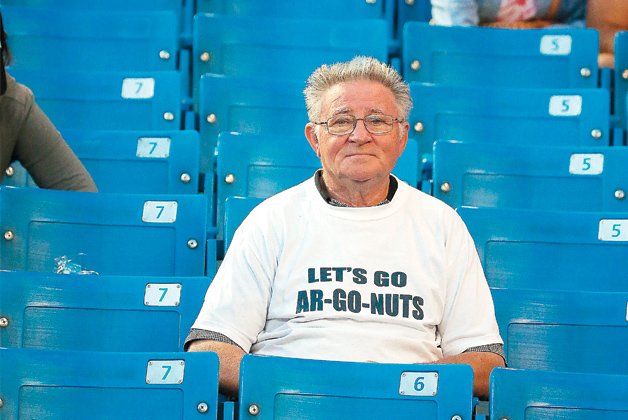 The Rogers Centre is a mix of quirk, passion and empty space at Argos games. A duo with massive drums beat along to Let’s Go Argos, but it’s tough to get excited when the sound fails to make it to the other side of the massive, half-empty stadium.

The Argos recently unveiled a new uniform, a move that, if made by other Toronto major league teams, would cause lineups outside shops. But most of the jerseys in the seats on this Tuesday night are worn and tattered, badges of honour from times past.

For a team that relies on a dedicated, niche fan base, there are simply more questions than answers.

Talk of local sports behemoth Maple Leaf Sports and Entertainment (MLSE) coming to the rescue by buying the team has died down now that MLSE president Tim Leiweke, believed to be a proponent of the deal, has announced he’s leaving MLSE.

The Argos will be without a home stadium to play in by 2017 (when its lease at Rogers expires) and likely without an owner before that. What will become of the city’s oldest professional sports franchise? When’s the last time the Argonauts mattered?

“There is the perception that Toronto has outgrown the CFL,” says TSN’s Football Insider reporter Dave Naylor.

For one weekend at least, the team was the toast of the town. November 25, 2012, was a good day to be an Argos fan. The franchise not only hosted but also won the Grey Cup, its first in eight years.

Yet underneath the pageantry – including a halftime show by Justin Bieber, a young Canadian star who’s essentially lost all connection with his country – the Argos relationship to Toronto had been fraying for years and is now at the point of dissolving entirely. Marketing of the 2014 season has been virtually non-existent.

“When you’re on life support, the solution is not to vanish from a marketplace,” says Sportsnet’s Arash Madani. “The Argos have damaged their brand on their own, quite significantly.” And the CFL, Madani points out, hasn’t been in any particular hurry to step in and do anything about it. Many are beginning to believe the CFL could survive just fine, thank you very much, without a team in the nation’s largest city. Television ratings and attendance at games in other CFL outposts would tend to bear that out.

Average attendance at Argos games has been dropping for the better part of the last decade. And while their two most recent home games have had announced attendance of more than 18,000, that number includes season ticket holders who don’t necessarily attend.

It’s the deep pockets of mercurial Argos owner David Braley that’s been keeping the team afloat despite losses in the millions in recent years. But Braley, who also owns the CFL’s BC Lions, has stated that he has no intention of owning two teams beyond 2016.

Under pressure from Major League Baseball to update the Argos home field at the Rogers Centre from an outdated artificial turf surface to natural grass, Rogers did not renew the Argos’ lease for the stadium past 2017. While the smaller BMO Field at the nearby Exhibition Place grounds seems a logical destination for the Argos, Maple Leaf Sports and Entertainment, which owns the Toronto FC soccer team that plays at BMO, has shown little interest in sharing the city-owned stadium.

In April, city council approved a $10 million investment in expanding BMO Field to accommodate the Argos, provided the federal and provincial governments kick in $10 million each. After MLSE president Leiweke secured funding for expansion, talks of an Argos move stalled.

Leiweke says, “David Braley and I have talked at length about BMO Field and a renovation at BMO Field that would allow for the Argos. Unfortunately, we were unable to find a solution, but that doesn’t mean there can’t be one at some point going forward.”

MLSE’s now focused on replacing Leiweke, so any plan to move them to BMO or acquire the team is likely on the back burner.

And that’s just fine with Daniele Franceschi, a contributor to the Toronto Argonauts website. Like many Argos fans, he believes that maintaining the team’s independence is a vital part of its brand.

MLSE’s recent attempts to hype Toronto as a sports destination, most notably recruiting rapper Drake to promote the Raptors brand, may have seduced some, but not diehard Argos fans.

“You don’t want a corporatized team [the CFL] is not that kind of league,” says Franceschi. “Its players are regular guys earning $100,000 a year to support their families and have to work other jobs in the off season. If you try to glamourize this team, you’re in trouble. Fans would really lose that personalized connection.”

But educating and exposing new fans to the game has been a challenge, says Clay Chisholm, the social media ambassador for the Argos Admirals, the team’s official fan voice. Toronto’s grown from a conservative Anglo-Saxon outpost into one of the most multicultural cities on the planet.

Says Chisholm, “The Toronto market is different from any other in the league. We have a massive mix of new immigrants who have not grown up with our football.”

Chris Rudge, the 69-year-old executive chairman and CEO of the Argos, walks the field in the hour before kickoff, shaking hands with employees.

Rudge served as CEO of the Canadian Olympic Committee for the 2010 Winter Olympics and chaired the successful Own The Podium campaign before taking over the Argos in January 2012.

He tells NOW: “There’s been an aura of indifference in the city throughout the last 20 years about the way this team has evolved. We’re trying to change that.”

Rudge admits that the most glaring problem facing the Argos is the vast home field. He oversaw the extension of the Argos lease at Rogers in 2013.

“People come to these kinds of events because they want a tribal experience,” Rudge says. “Unfortunately this place is so big that even when you have 20,000 in the lower bowl, it can still be a cavernous experience.

He adds that “the corporate partnerships suffer when you have a brand that’s become as small as we have.” Indeed. Advertisements for local trade unions, not the power brands normally observed at Blue Jays games, dot the field.

To Rudge the answer for what ails the Argos is quite simple: to be owned and operated by MLSE. “It’s a no-brainer.” But he’s quick to point out he’s not speaking for the owner.

Marketing reach aside, TSN’s broadcast rights to CFL games may devalue the appeal of the Argos to the MLSE board.

Because of the Blue Jays 81-game home schedule throughout the majority of the Argos season, the Argos are usually relegated to haphazard scheduling, including a recent two-game homestand that fell bizarrely on a Tuesday night and then again the following Sunday. Friday Night Football is TSN’s flagship CFL program, and the Argos have only two Friday evening home games this season.

Rudge hopes a move to BMO would spark more fan and television interest.

“I still believe we’ll probably end up in BMO Field,” he says, “which is, if done right, a better environment than where we are now. But there will still be challenges. What kind of terms would we enter in on? Are we going in there as a team owned by MLSE?”

October 4, 1873 The Toronto Argonauts Football club is formed as part of the Argonaut Rowing Club.

1959 The Argonauts move from Varsity Stadium to Exhibition Stadium. The inaugural game is an exhibition match featuring the NFL’s Chicago Cardinals.

1994 Ismail leaves the team. McNall faces conspiracy and fraud charges, and the Argos are sold to TSN Enterprises.

July 2003 The CFL strips Sherwood Schwarz of ownership amid concerns over growing debt.

2003-2010 Local businessmen David Cynamon and Howard Sokolowski buy the team. Despite an initial resurgence in ticket sales and a Grey Cup in 2004, the team’s financial losses mount.