For Cheri DiNovo, it’s a matter of principle 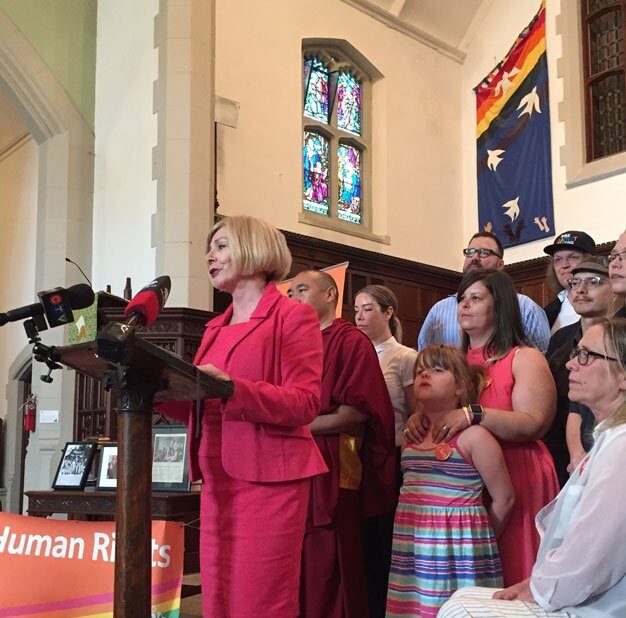 The federal NDP leadership race has its first challenger – sort of. Cheri DiNovo, the long-time NDP MPP for Parkdale-High Park, declared herself an “unofficial candidate” to replace Tom Mulcair at a press conference at a Roncesvalles church on June 7. Below is an edited transcript of her remarks.

The first of my announcements is that I will not be running for re-election as a member of the provincial parliament for Parkdale-High Park. However, I’m certainly not intending on retiring, which brings me to my second announcement.

After the Edmonton convention, I was very proud, of the rank and file of my party. They made difficult, even painful decisions, and they made them on a principled basis. When asked afterward, feeling excited and positive about the future of the NDP, I said I wasn’t interested in running for the leadership. I felt certain we were on a new track, one that wanted to reaffirm our socialist principles and confront the climate crisis.

Sadly, however, some in the party proceeded to attack the very rank and file that had made their voices heard. I have a very difficult time when I see the most marginalized attacked, or spin replace evidence-based analysis. That is why I am putting my name forward as a candidate for the federal NDP leadership.

As the rules decree that one needs to pay $30,000 and raise up to $1.5 million, I’m declaring myself as an unofficial candidate. Money should not be a barrier for the leadership of a democratic socialist party.

Instead, I intend to fight not for me, but for the NDP, a party of which my father was a founding member. And to fight for principles rather than for a position, and these are the principles:

Number one: an aggressive and realistic response to the climate crisis. This is an existential crisis. Fifty-one degrees was registered in India just a couple of weeks ago as the hottest day on record. Wildfires, tornadoes, flooding of coastal areas – these are our future if we don’t act.

Number three: real justice for Canada’s First Nations, and respect for treaty rights. It means working with Indigenous Canadians to protect our land, water and species at risk. It’s not enough to say Black Lives Matter. It must mean an end to systemic racism.

And four: truly and universally free post-secondary education and health care, livable social assistance and pension rates, and true protections for those with disabilities, and of course, housing for all.

It sounds radical, but all of it is already in place in other countries. Paying for it is the least of our problems.

Corporate tax rates in economic powerhouses like Germany and other European jurisdictions are often twice what our rates are. We need to institute a real wealth cap and a banning of offshore graft.

The rates of poverty, hopelessness and suffering are unethical, immoral and unacceptable. The kind of casino capitalism we see in action today has nothing to do with freedom and everything to do with the concentration of wealth for the few and the exploitation of the many.

This is not about me. If a stronger candidate comes forward who upholds the democratic socialist principles our party was founded on, I will happily step aside and support them.

As I said earlier, I’m not about to retire any time soon, but I’m also not willing to see another year, never mind a decade, pass without action.

The NDP, I hope, [will] take on the wealth and power that not only stifle Canada, but threaten the very existence of our planet.

We should be a party of principles, people and passion, not polling, pundits and the quest for power. It’s time.