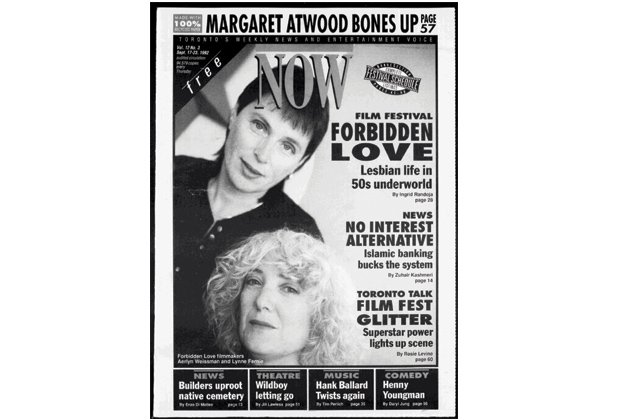 1983 edition of NOW.|Atom Egoyan's Calendar|Naked Lunchs Peter Weller greets everything with a straight face and a wary eye.

The National Film Board’s groundbreaking documentary Forbidden Love: The Unashamed Stories of Lesbian Lives is making a comeback. Digitally remastered, the film about women coming out in the 50s and 60s – dangerous times for dykes – screens at this year’s Inside Out Festival.

Directors Lynne Fernie and Aerlyn Weissman were on NOW’s cover when the movie played at TIFF (then the Festival Of Festivals) and talked about the pressure – and pleasure – of representing lesbian life when there were so few films around that did so (September 17, 1992, page 28).

Since then, that canon has grown dramatically, but Forbidden Love itself was forced to fade. That’s because 15 years after it first appeared, the filmmakers lost the rights to its music and most of the archival footage.

This Inside Out screening celebrates not only the digitally remastered version of the doc – available on DVD and for download at nfb.ca – but the renewal of those rights around the world, in perpetuity, except for theatrical releases.

Forbidden Love screens at Inside Out on Sunday (May 25), 4:30 pm, at the TIFF Bell Lightbox Cinema 2. I’ll be moderating a panel discussion following the screening, with Fernie, producer Rina Fraticelli and film critic B. Ruby Rich (insideout.ca).