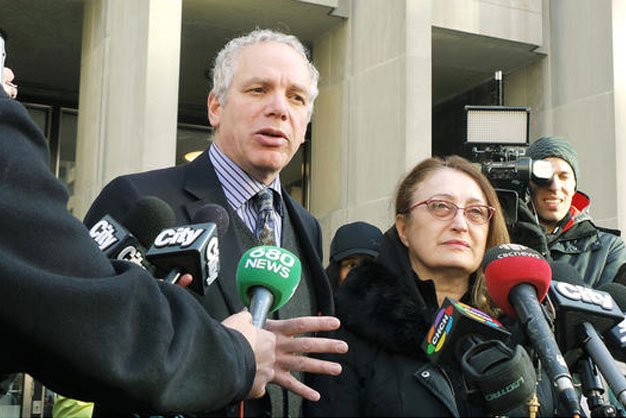 On Monday, January 25, Toronto Constable James Forcillo was found guilty of attempted murder but not guilty of second-degree murder in the July 2013 killing of teenager Sammy Yatim. The verdict has the potential to transform policing in this city, but the events surrounding the dramatic decision serve as a reminder that the institutions of justice are set in their ways.

12:02 pm: News breaks that the jury has reached a verdict. A police “video services unit” truck has been parked outside the courthouse throughout the jury’s six days of deliberations, but today it’s joined by an unmarked black Chevy Suburban with a camera on its roof.

12:49: A knock from behind a door. “Order, all rise.” Justice Edward Then enters and takes his seat.

“The jury has a verdict,” he announces. “I’m going to ask them to come in and deliver their verdict.”

Nothing happens for several minutes. The judge demonstrates the same patience and control that he has throughout the trial, for which Yatim’s mother, Sahar Bahadi, later praises him.

12:55: The registrar asks the defendant to rise.

“Do you find the accused at bar, James Forcillo, guilty or not guilty on count number one, of second-degree murder?” she inquires.

“Not guilty,” says the foreperson.

The lesser and included offence of manslaughter?

The courtroom remains unflinchingly quiet as everyone processes the implications.

1:00: Court goes on recess. Bahadi appears stunned as she is led up an escalator. She’ll later explain that she “would like to be part of the discussion to change the police training policies when dealing with people in crisis so this painful incident does not repeat again.” But the legal proceedings against Forcillo are far from over.

1:20: Outside, Forcillo’s lawyer, Peter Brauti, complains that the case began with a “trial by YouTube” and that the verdict may have been compromised by jurors coming in with opinions already formed.

“This is phase one of a long road for us,” he says, adding that he’ll request that the charge be stayed because the state shouldn’t be entitled to convict a police officer who “substantially” followed the training that it had given him. Brauti will also begin work to appeal the verdict and launch a Charter challenge against the Criminal Code’s mandatory minimum sentences for attempted murder.

Standing next to Brauti, Toronto Police Association head Mike McCormack says that the verdict “sends a chilling message to our members” and that it’s “impacted the safety of frontline officers.”

This is his standard response to anything that might disrupt the policing status quo. 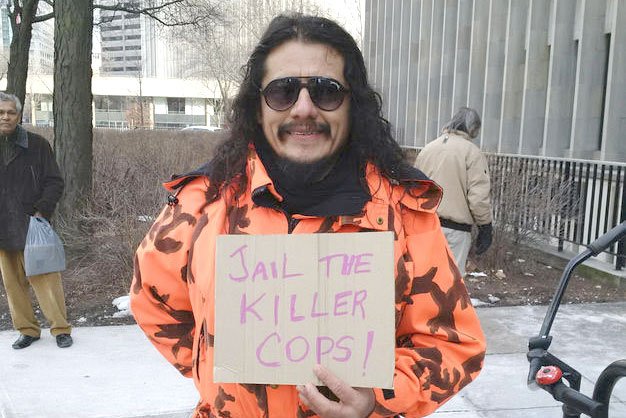 Miguel Avila of Toronto Cop Watch outside the courthouse on Monday.

2:18: Toronto Cop Watch‘s Miguel Avila – a frequent deputant at City Hall and a ubiquitous presence at justice rallies – shows up outside the courthouse carrying a small sign on which he’s written in pink letters, “Jail the killer cops!”

2:54: To discuss sentencing and motions, the court books the first period of two unbroken weeks that both the judge and defence have available: the second half of May. Forcillo will remain on bail and be suspended with pay until at least that time.

Per Ontario’s Police Services Act, pay may be cut off only once an officer has been convicted and sentenced.

3:19: Accompanied by lawyer Julian Falconer – who is handling the Yatim family’s ongoing civil suit against Forcillo, former chief Bill Blair, the Toronto Police Services Board and two unnamed officers – Bahadi reads a statement emphasizing that the trial is just a first step for her.

Falconer, an expert in defending those wronged by police and the justice system, says the verdict is “reflective of a sea change” in police accountability and sends a loud and clear message that “the old days when a police officer went to trial in the shooting death of a mentally ill or an emotionally disturbed person and literally enjoyed an immunity at the end of a trial – those days are gone.”

Asked by a reporter what message the chief has sent by assigning a phalanx to protect Forcillo, Falconer declines to take the bait.

Instead, he blasts police for neglecting to implement key recommendations from retired justice Frank Iacobucci’s 2014 report on dealing with people in crisis, saying that nothing on their end has changed. Officer safety, he says, remains firmly entrenched as the ruling factor in how police determine the necessity of force.

“It has gone so out of whack,” he says, “that an officer’s safety will trump and indeed justify lethal force if someone has a pencil in their hand and they’re emotionally disturbed. That balance hasn’t been fixed. The training is still the same.”

Forcillo had testified that his primary obligation as a police officer was to make it home at night.

3:39: Members of the media stake out all four of the building’s exits hoping to catch Forcillo as he leaves.

5:14: Forcillo’s people tell media that he will depart via the north exit, where microphones are set up and waiting. After descending the escalator to the lobby, however, he defiantly goes east instead.

Catching up to Forcillo, McCormack informs him that he’s supposed to leave the other way. Nope, Forcillo responds, he is going to head east.

The crush of people following him out the east exit causes the lone set of revolving doors to lock several times.

5:16: As he plods determinedly to the waiting police vehicle, Forcillo refuses to acknowledge questions from the media surrounding him. From the sidelines, Avila repeatedly shouts that Forcillo is a killer.

Police indiscriminately pull and shove journalists, including those who are nowhere near Forcillo. A cameraperson from Global is thrown to the ground.

Sirens blare as officers shuttle away their colleague who has been found guilty of attempted murder, ensuring that like themselves, he makes it home safely for the night.