Rob Ford explains why he lied about crack, but lies about something else in the process 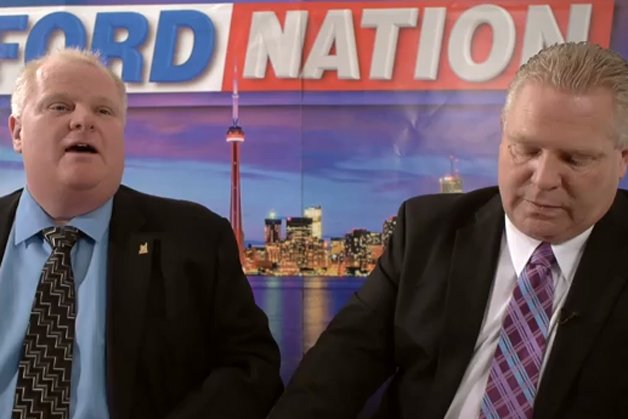 The Ford brothers are back broadcasting once again.

For anyone who regularly tuned in to Rob and Doug’s radio show (now cancelled) or their Sun News TV program (which lasted one episode), “Ford Nation,” which debuted Monday on YouTube, is mostly familiar stuff: a two-man echo chamber filled with folksy bromides about Toronto being “the greatest city in the entire world,” sports banter, and numerous inaccurate boasts about the mayor’s accomplishments.

Among the mistruths: Mayor Ford’s claim that unemployment is down from 11 per cent to 7 per cent – in fact, an economic dashboard published by the city in January places Toronto’s unemployment rate at a troubling 10.1 per cent. (The mayor knows about these latest numbers. When asked about them last month, he responded, “Toronto is booming.”)

Although Ford says “we’re looking for this re-election” at the top of the show, he offers little in terms of a campaign platform, except to repeat some big promises he’s made before, like pursuing subways for Finch, Sheppard, and the Downtown Relief Line, and contracting out garbage collection east of Yonge.

But the most newsworthy passage of the four-video episode is a segment titled “Ford comes clean” in which the mayor explains why he lied about his crack use for six months. Unsurprisingly, the reason is “I didn’t want to tell the truth.”

“That’s the only answer I can give. That’s as straightforward as I can be,” the mayor says. “I’m not a drug addict, I don’t use drugs. Have I in the past? Yes. And when they asked me, it’s very very humiliating in front of the world to say yes.”

As he has before, Ford describes his conduct during the drug scandal as nothing out of the ordinary.

“Everybody’s lied,” he says. “Maybe people can tell me, why do you lie? People either lie to cover up [or] people lie because they’re embarrassed. That’s why I lied.”

The mayor also states that “I do not have a substance abuse problem,” but does not repeat his November pledge to quit drinking, nor claim that he has stayed sober since being videoed last month publicly intoxicated at an Etobicoke fast food joint.

The mayor’s office announced the YouTube series on February 6, and it’s not clear whether the video was shot before or after the mayor’s recent trip to B.C. on February 1, when he was seen partying at a Coquitlam bar called the Foggy Dew.

The Toronto Star reported on Saturday that, according to a witness, Ford spent an hour in the bar’s washroom and emerged twitching and babbling incoherently.