It's going to be terrible 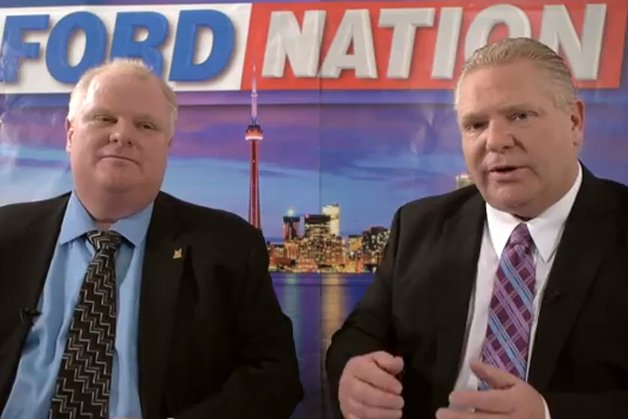 As if we needed any more confirmation that we’re truly living in the Golden Age of Television, Rob and Doug Ford are set to launch their own online show next week.

Doug first mentioned the project back in November, after Newstalk 1010’s decision to cancel their radio gig left the Ford brothers without an outlet through which to spew their bilious propaganda every week. Back then Councillor Ford said the Youtube show would be online before Christmas, but they apparently got sidetracked. Possibly by smoking crack. We just don’t know.

If the 30-second promo is any indication, Ford Nation will feature the mayor and his brother sitting in front of a crinkled backdrop depicting our once proud city, making baseless accusations against their political opponents and trading fat jokes. For their sake, let’s hope it survives longer than their stint on Sun News Network last year, which lasted a single episode.

According to a press release from the mayor’s communications assistant, the Fords started the show in order “to connect with a broader audience.” As if anyone with a ham radio doesn’t know who Rob Ford is by now.

Interestingly, it’s not clear if the series is part of the mayor’s re-election campaign. The press release was sent by his assistant Amin Massoudi, whose salary is paid by the public. But it lists fordnation2014@gmail.com, which could be construed as a campaign address, as a contact. It’s against election rules to use city resources to campaign.