On the mayor's watch, the repair backlog and waiting list for shelter at Toronto Community Housing has gone from bad to godawful 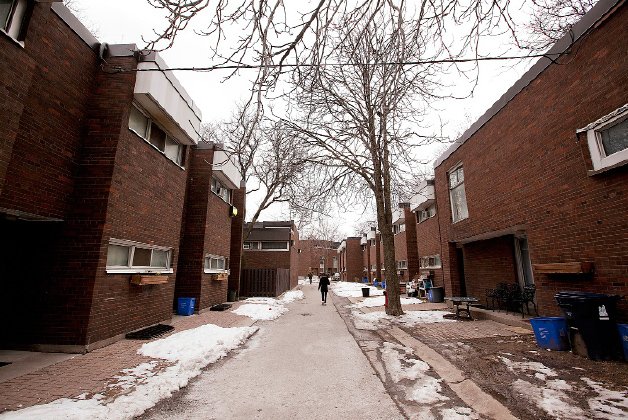 Rob Ford calls himself a champion of community housing.

He famously tours blighted apartment buildings and visits with needy tenants, extending his personal promise to get fridges fixed, patch holes in the walls or get rid of bedbugs.

These jaunts have become a defining part of his political persona, and are welcomed by many residents.

“I’m the only one that goes into the housing projects and helps these people out,” Mayor Ford told NOW in a brief interview outside his office last week.

But as is often the case, Ford’s boasts mask a less favourable truth. Several key indicators make clear that the state of community housing has deteriorated, not improved, on his watch.

And for all Ford’s promises to get individual units fixed, the repair backlog at city-run social housing provider Toronto Community Housing continues to balloon. It rose from $647 million at the start of 2011 to $862 million today.

“He’s spent more time as mayor – give him credit – touring public housing,” says Councillor Adam Vaughan. But “he hasn’t fixed it. You can scream at the cockroaches and the bedbugs all you want. Screaming doesn’t make them go away.”

The repair backlog is expected to get much worse over the next decade and reach an estimated $2.6 billion, an amount the city can’t afford on its own. In November council approved a plan to pay one-third of the amount and ask the federal and provincial governments to contribute the rest.

When the plan came up for a second vote during the 2014 budget debate, the mayor voted against it.

Although he has aggressively sought provincial and federal funding for storm relief and the Scarborough subway, Ford told NOW there was no point in requesting housing funding, because “they’re not going to give us the money.” He suggested that doing so would only irritate the other levels of government.

“Why you gonna sit there and aggravate ’em?” he asked.

In the early months of Ford’s term, a pair of scathing auditor general reports found millions of dollars of questionable or untendered contracts at TCH, and described a workplace culture that lacked adequate accountability and permitted lavish employee spending.

The scandal was a political gift for Ford, who used it as an excuse to oust the TCH leadership and appoint his own man to run the agency.

Serving as an interim one-man board, Case Ootes, a former councillor and member of Ford’s transition team, pushed a controversial plan to sell up to 900 single-family TCH homes to finance repairs.

A year later, Eugene Jones was appointed CEO. Jones has a reputation for turning around housing agencies in Detroit and Indianapolis, and Ford backed him to right the ship at TCH. “Today, there is a new board of directors and senior management team who are committed to customer service excellence,” wrote the mayor’s spokesperson in an email. “The mayor has already noticed a marked improvement in the conditions of the buildings he tours.”

But the agency hasn’t been free of scandal under its new leadership. The city ombudsman determined last year that seniors were being unfairly evicted from TCH units. She also launched a probe into hiring practices under Jones, the results of which are expected this spring.

In August, Jones was criticized for offering $150,000 in repairs to a complex whose residents helped with a murder probe. Other tenants wondered where the money had come from, given the repair backlog.

The new CEO even revived accusations of profligate spending when he proposed a $2 million renovation of the agency’s headquarters. (He quickly backed off.)

Jones was not available for an interview with NOW, but a TCH spokesperson says the agency is working to be more transparent. It now publishes quarterly financial reports, and recently created a housing equity commissioner to ensure no one is evicted unnecessarily.

But Councillor Ana Bailão, chair of the Affordable Housing Committee, says that although Jones has the personal touch with residents – just like Ford – he has yet to tackle the agency’s bigger problems.

“Gene has brought that contact with tenants, which I’ve heard from tenants they really appreciate,” Bailão says. “But Gene still has a lot of work to do. There needs to be more accountability.”

The push to sell off TCH houses stoked huge controversy. Tenants, many of whom have mental health issues or other challenges, feared they were going to be displaced.

Residents were kept in the dark. Housing activist Susan Gapka remembers coming downstairs in June 2011 to find Ootes giving media a tour of her high-rise at 389 Church. He was suggesting to reporters that the building should be sold.

If felt like an “ambush”, Gapka says. “That’s not a very good way to wake up in the morning.”

The push-back from tenants was so fierce and opposition from council so strong that Ford abandoned the mass sell-off. Instead, in February 2012 he appointed Bailão to head up a housing task force that eventually found innovative ways to pay for repairs without uprooting tenants.

Bailão arranged to refinance mortgages on some TCH homes, freeing up $94 million. By selling a smaller number of decrepit houses, another $59 million was raised.

Tenants were involved in crafting the plans. “We earned and deserve to be part of the conversation,” says Gapka. “That was a relief.”

Now Bailão is spearheading Close The Housing Gap, a campaign to pressure the federal and provincial governments to address the repair backlog. Because Ford wasn’t supportive, she partnered with Vancouver mayor Gregor Robertson instead.

She says Ford has fought her at virtually every turn, and accuses him of hypocrisy on the housing file.

“You don’t help these people out by going to their door. You help them out by making sure the budget has enough money to address their issues,” she says.

142,555 People on the city’s waiting list for community housing when Rob Ford took office in 2010.

17.5 Percentage increase in number of people on the waiting list since 2010.

$647 million Total amount of the repair backlog at Toronto Community Housing in 2011.

$2.6 billion How large the repair backlog is expected to grow over the next decade.