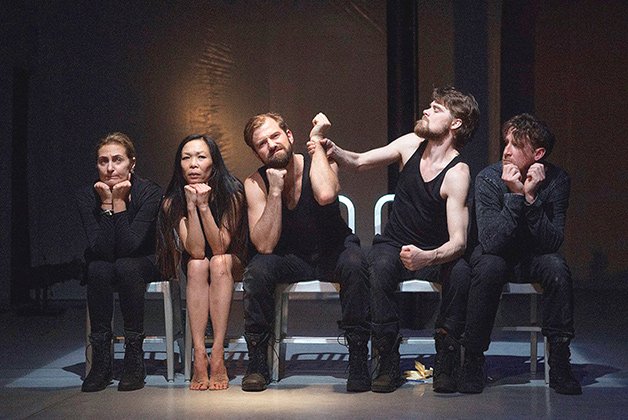 Performers throw themselves into the action of the potent movement piece Forgiveness.

Forgiveness, a powerful piece of movement theatre, looks at what it takes to forgive on both the personal and social level, and whether we can forgive others as well as ourselves.

Given the complexity of the topic, this new production can be pardoned if not every scene has equal strength.

The five performers (Peter Farbridge, Stavroula Logothettis, Andrea Nann, Jannik Elkaer Nielsen and Kristoffer Louis Andrup Pedersen) literally throw themselves into the sometimes abstract action, whether they’re taking lessons from a self-help guru who asks them to follow a steps system, looking for mercy from a silent deity or beating each other up in a goading wrestling match.

The movements and performances are so clean that even if the specific meaning of a scene isn’t clear, the performers’ commitment to the material is never in doubt.

Among the individual episodes are a relationship’s messy breakup, a historic look at aggression, and a series of taped public apologies. The serious can become the comic with a body’s twist or the repetition of a phrase that turns the intense into the ludicrous.

One moment we’re being sung a gentle lullaby, the next we’re in an operating room where an injured man – identified as various people who have committed crimes against humanity – begs for water as his caregivers turn on him.

Tape recorders and microphones are crucial here, too, with some of the text recorded and the mikes giving a sense of intimacy of thought and feeling. A microphone can also become a weapon, as likely to deliver a blow as to allow the release of feelings through speech.

The intentionally ambiguous ending offers the hope that in the grand scheme of things an injury, personal or larger, is a minor event. Can we go beyond our hurt, our pain, our desire to punish? The show’s last words suggest that we can.