The long-awaited pedestrian and cycle bridge, once scrapped by former mayor Rob Ford, will connect downtown west to Fort York and the waterfront

Toronto residents will have a new way to access the waterfront and park spaces surrounding Fort York National Historic Site in 2017. Today, the mayor and councillors, alongside reps from Build Toronto, unveiled plans for the Fort York Pedestrian and Cycle Bridge. The project will cross two rail corridors and connect Stanley Park, near Wellington and Niagara, to Fort York on the south.

“It’s an investment in creating a vibrant, mobile, liveable downtown core. It’s an integral part of the city’s plan to revitalize and connect up the waterfront.” Mayor John Tory said.

The $19.7 million project was awarded to Dufferin Construction Company, a division of CRH Canada Group Inc. Construction will begin in spring 2016, nearly a decade after the bridge was first proposed. Initial plans saw an S-shaped bridge connecting Fort York to Bathurst and Strachan. When the project was scrapped by Rob Ford shortly after he was elected, a second attempt to build a cheaper bridge in 2011 was also killed.

“It’s time things like this stop being political football or some kind of reaching for the lowest common denominator,” Tory said. “We’ve left this project in limbo for some time.”

The project, which will mark the first stainless steel span in Canada, actually consists of two separate bridges. The first will run from the South Stanley Park Extension, currently an empty lot on Wellington Street, to Ordnance Park, a soon-to-be-developed triangular piece of land between the Georgetown and Lakeshore rail lines. A second bridge will connect Ordnance Park to Garrison Commons at Fort York.

“The two-bridge design was proposed because it gives the user the flexibility to touch down in Ordnance Park and to provide a gateway to the future development as well as surrounding communities. This feature also helps reduce the overall cost of the project,” James Wildish, manager of partnerships and ventures for Dufferin Construction, said.

The design of both spans feature arches that tilt in opposing directions “to create a dynamic visual experience for the user,” Wildish noted. “The tilts work in a yin-yang fashion and reinforces the notion of a single integrated crossing.” 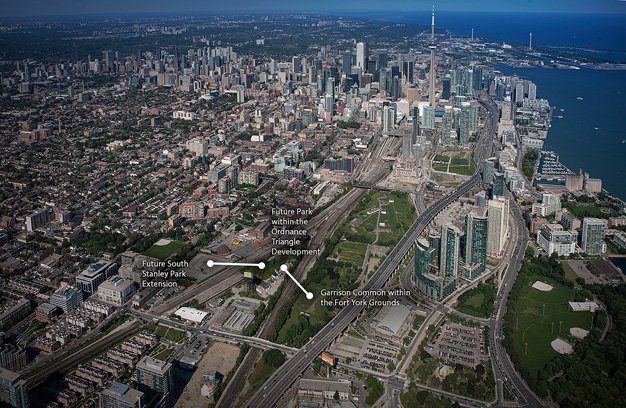 A map showing the Fort York bridge and surrounding locations.

Adam Vaughan, the MP for Spadina-Fort York, saw previous designs for a Fort York bridge come and go as a city councillor from 2006 to 2014. He said at this point, he’s just happy to see a long-awaited pedestrian pathway to the waterfront being built in the neighbourhood.

“For those of us who live along King Street, the neighbourhoods weren’t designed with a lot of connectivity and as a result, it can be a very frustrating place to get in and out,” he said. “This bridge gives us a safe way to ride or walk or stroll to the waterfront. I think as we build a more beautiful waterfront and as we embrace the opportunities along the waterfront, the elegance of how we do that matters. It is a beautiful waterfront, and the more beautiful we make the access to it, the more use it will get.”

“People who live in these new neighbourhoods that have been created in recent years need a place to play, a place to chill out, a place to relax. They need libraries and rec centres, and of course, they need parks,” he said. “The irony in this case is there’s excellent park land but it’s just not connected to these neighbourhoods.”